I just got an RP5 chassis, and hooked it up with an Arduino. The Arduino has the Adafruit motor shield which has worked on another project. However, the RP5 chassis doesn’t go anywhere when the arduino is powered up. I can hear the motor whining but the treads don’t move.

I’ve measured the output of the battery pack at 9.5 volts, which should be enough if I understand correctly, but no go. I’m kind of new at this stuff so if someone could give me a hint I’d appreciate it. 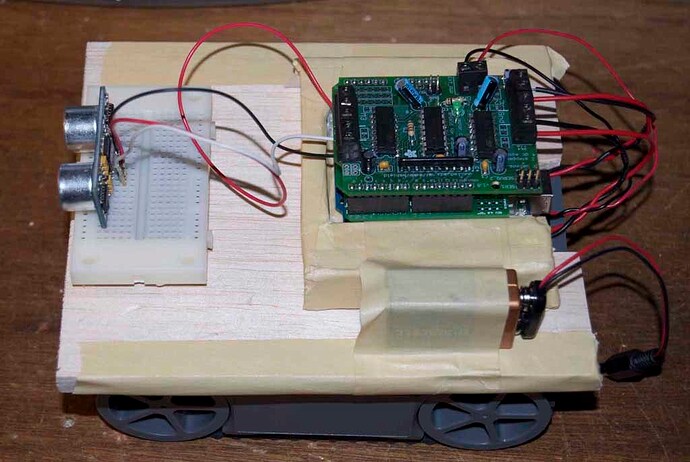 Thanks for posting a picture of your setup.

How are you powering the motors? You cannot drive a motor with a single 9V cell because it can’t do that much current. The RP5 has DC brushed motors inside it, so you can simplify your setup by just connecting the battery powering the motors directly to the motors. If it works like that, there is probably something wrong with your code, or your motor driver.

Hi, yes the motors run like a champ if I connect the battery to them directly. Maybe I did something to the board while moving it around. I’ll have to do some looking.

Thanks for the help, sorry I missed the obvious.