Pololu RC Servo Multiplexer 4 Channel web page list the following information:
“If the selection signal is invalid, an optional jumper across the pins labeled J1 determines the output behavior. If the jumper is left off, the output channels go low and stay low for as long as the signal on the SEL pin remains invalid. For many servos and electronic speed controls (ESCs), a constant low on the signal line will turn them off, which might be desirable if the control signals are known to be bad. If the jumper is in place, the output channels default to the master signals if the selection signal becomes invalid. The multiplexer considers a valid RC signal to have a 10 – 100 Hz pulse rate and a 0.5 – 2.5 ms pulse width.”

Is there another way to explain the above pharagraph. If no SEL pin then how does it remain invalid? The jumper is the blue jumper, and
If the jumper is in place, the output channels default to the master signals if the selection signal becomes invalid. I am using a microcontroller and the microcontroller is the slave to the master radio transmitter. Now there will be times when the plane will be out of range. So therefore the plane will have no signal to control it. This would only happen IF the slave microcontroller stopped working for some reason. Can you clarify please.

See below second picture, I see no SEL pin on this picture, is it just missing? Is a pin normally there? If the pin is there what is its function other than to be able to check the signal? 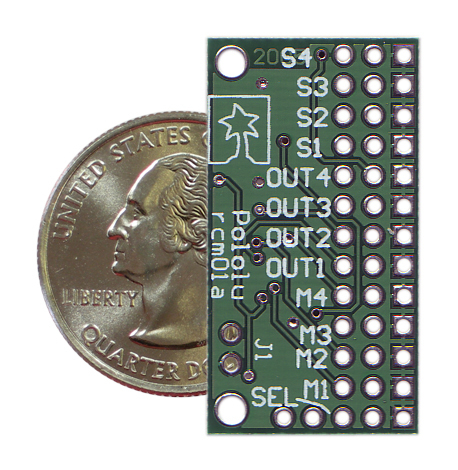 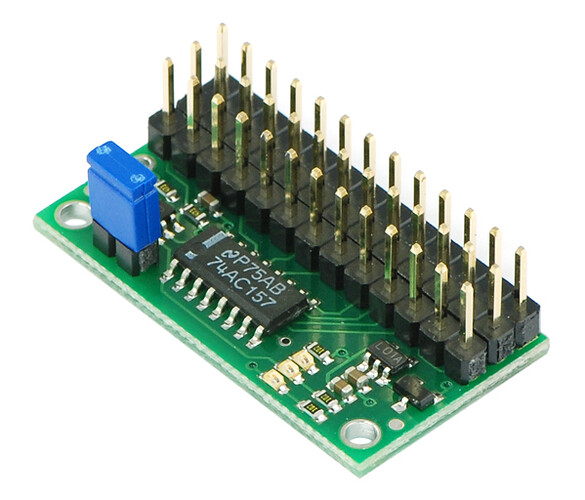 I see no SEL pin on this picture, is it just missing? Is a pin normally there?

I hope I have asked the question properly and with enough information so you can clarify.

In the first picture, the SEL channel is the bottommost row on the three columns of pins, indicated by the diagonal line pointing from the label. As with each of the other channels, the signal pin is the third from the right, the second from the right is power, and the rightmost is ground. (We use the two extra unlabeled holes to the left, underneath the word “SEL”, to program the board; you do not need to worry about them.)

An example of how you could use the multiplexer on your plane is if you had four control signals from your microcontroller going to the master inputs, four channels from your RC receiver going to the slave inputs, and a fifth channel on your receiver going to the SEL input. Assuming your transmitter has a switch on channel 5, you could then use that switch to select between autonomous control (from the microcontroller, via the master inputs) or manual control (from your transmitter/receiver, via the slave inputs) of your plane with the four multiplexed channels. Then, if you have the J1 jumper on and the plane goes out of range, the multiplexer will stop getting a valid signal from the receiver on channel 5 (the SEL channel) and it will default to using the master signals, allowing the microcontroller to take over. Does that make sense?

Your explaination was great! Thanks for taking the time to clarify my understanding of the SEL pin but also of exactly how to do the switch between transmitter signal and slave microcontroller control.

Perhaps, the body of the reply with little rework could be added to the web page to give a clearer understanding of the SEL pin for all users. Just a thought. Maybe I was just a little dense.

No, I’m putting at least six months work into this auto pilot, so I have to dot all the “I”'s and cross all the “T”'s so to speak.

Keep up the grat work!