Hello,
I bought two pololu 30:1HP motors for a line follower that im building, but when i installed them i realized that it didnt have much torque and as a result i can go with slower speeds, it only start with high speed. The robot weights about 100grams. I thinking now to go for the 50:1 HP . Will i be able to obtain slower speeds with these motors for my 100grams robot?

What kind of batteries are you using, and how big are your wheels? The 30:1 HP motors should generally provide more than enough torque for a 100g robot, so I wonder if something else is wrong.

However, the 50:1 motors should give you about 5/3 the torque and 3/5 the speed, so they might work better for you.

Thanx for your answer,
The wheels im using is the 3pi wheels (32mm diameter) and a 2 cell 7,4V 800mAh lipo battery. The total weight with the battery is 127grams .

That really makes me think that something is wrong, because you should be getting more torque than a 3pi with that setup. Can we look into this more? I would like to know what motor driver and controller you are using, and what speed you have to set it to before it starts turning. If it is still stalled at, say, 20%, could you set it to that speed, then measure the voltage on your batteries AND on the motors using a meter?

A picture of your setup might also be helpful.

Hello thanx for your answer. Im using an arduino and a L298N bridge. If it didn’t attached to ground the wheels starts turning at 13(pwm with arduino). If it is on the ground it starts moving at 20 . My problem is that i dont have torque at these speeds and i believe that the motors dont react very good to the PID algorithm that im using in these speeds in order to start tuning it. I measured the volts in 17speed stalled at ground. On the motors i got 0.1V, in the battery 7.8V and when it is switched off the battery was 8V. 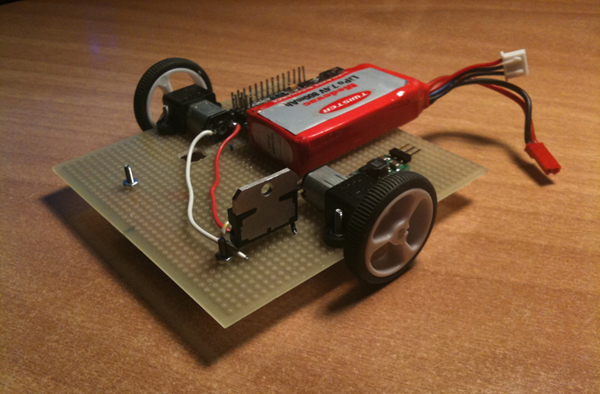 Based on the numbers you gave me, I am not sure what your problem is. At a duty cycle of 17/255, the average voltage seen by the motor is going to be less than 0.5V. That is approximately the voltage at which I would expect a motor to turn on, anyway. You will not be able to get motors that turn on at much lower settings.

You might have problems if the motors barely move at speed 20 but go way too fast at speed, say, 30 - is that the case? If so, you should switch to motors that have a maximum speed compatible with the maximum speed you want.

By the way, the L298 has a relatively poor performance for what you are trying to do. You will be losing about 2V in the L298 no matter what, which means that 25% of your battery power is just going toward heating the chips. Use a more modern, MOSFET-based chip like the TB6612FNG, and you will be wasting almost no power. That might even reduce your minimum speed setting by a bit, since nearly the full battery voltage will be available to the motor during the brief PWM pulses. If you do go with the TB6612FNG for the HP motors, I would recommend using one for each motor, with the outputs in parallel; otherwise you might be really close to the limits of the chip under certain circumstances.

By the way, I see what looks like our Adjustable boost regulator in your second picture - what is that being used for?

Hello again, i just received my new 50:1 hp motors in order to solve this problem, but i have a question. I’ve managed to follow a line with my previous 30:1hp motors with the pwm max at 80. Now when i installed the new 50:1hp im doing the same track(with new pid parameters) at 255pwm and the robot goes slower than before. Im wondering what im doing wrong with the calculation. The specs of the 30:1hp says that is 1000rpm and the 50:1hp is 625rpm. Based on this with 255 speed and the 50:1hp i must going about x2 faster than with the 30:1hp in 80pwm.

Anyway, it is really hard to say what is going on here, since there are so many factors. A big one is your PID code, which might not be doing what you think it is. If you want to look into the issue more, you could try replacing your program with one that just runs the motors at speed 255 to see how fast they turn.

I still recommend that you replace the L298 with a more modern, MOSFET-based motor driver.