I was wondering if there were any plans to add quadrature encoder input for setting the target value for the jrk 21V3 and jrk 12v12?

Just to check, do you really mean that you want the quadrature encoders for input, not feedback? The idea would be that you could use a dial with an encoder as a control for your system, right? I have not heard anyone request that before, but it is a good suggestion.

Unfortunately, the jrk does not have sufficient computational power to handle quadrature encoders at all. But we will keep this in mind for future products that do support encoders.

Until then, if this is a feature you need for your project, I would recommend using a separate microcontroller to read the encoder and send serial commands to the jrk. We can give you more advice here if you want to try this approach.

Hello Paul
Thank you for the prompt reply I would like to use a incremental quadrature encoder for setting input (target) value (0 to 4095).

I would be willing to try a separate microcontroller to read the encoder and send serial commands to the jrk.

But I would also need some advice in getting pointed in the right direction.

I am currently using 2 of the JRK 21v3’s in the 737 Flight Simulator’s autothrottle. 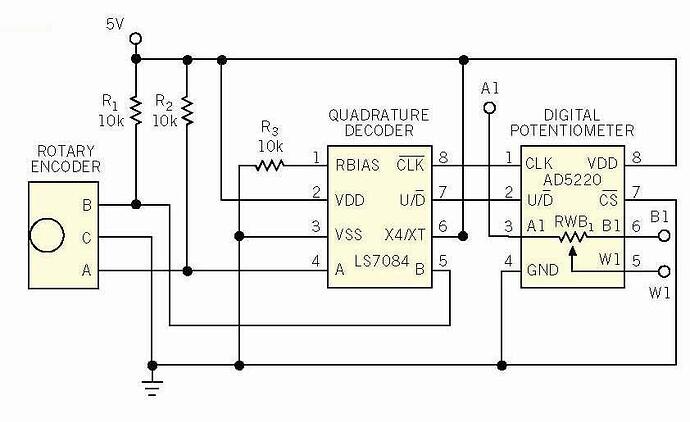 That does look like a pretty simple solution. By the way, it looks like the digital pot you chose only has 128 positions; you might want to use one that has more resolution.

Hi Jan
The resolution was a issue, but it was a way to prove the concept !

I did find an off the shelf solution made by US Digital it’s a EDAC2 Encoder Digital to Analog Converter. It has a resolution of 4095 counts and can do various voltage outputs.