I have recently encountered some issues with these sensors. We purchased two of the 8 sensor arrays and split them both, so we had a pair of 6 sensor arrays and a pair of 2 sensor arrays. We are using these sensors for navigation of a small robot around a carpeted competition course. We have not tested with the 2 sensor arrays yet, but both of the 6 sensor arrays have been tested and do not work anymore. We can check with my cell phone camera, and the IR emitters do not work on either array. We wonder if this could be anything to do with some static discharge because the sensors are so close to a carpeted surface? They really aren’t touching the carpet when in motion, but they are close. Another theory is because of their connection to the robot chassis. Our ‘chassis guy’ did not have the correct sized screws for the holes on the sensor array board, so he drilled the holes out to make them a little larger. As we were thinking about it he remembered that in doing this he removed a thin metal ring that lined the original mounting holes. I believe that these rings would have provided some type of grounding to the chassis, but we screwed them out. Could this be the cause of the arrays losing functionality? I should say that they did originally work. We are just trying to figure out why they stopped working.

Thanks for your time,
Mark

Alright I’ve got an update on the problem. We did some testing and each LED emitter does still function when powered directly on their individual connections. The problem is trying to power the entire board with its ‘Vcc’ and ‘Gnd’ connections. Any ideas as to how this happened or how to fix it?

Can you post close-up pictures of the component side of the QTR sensor arrays? I’m wondering if a component might have gotten knocked off when you split the boards apart.

Thanks for the fast response,

We started with two 8 sensor array boards. First we tested board A. We split board A into its 6 array and 2 array components. After the split, both parts were still functional. Then one day we pulled our chassis out of its cabinet and the 6 sensor had stopped emitting as I’ve mentioned, so it is questionable to us when that actual part stopped working.

Board B. We screwed it to the chassis as a complete 8 sensor array (still only using the 6 sensors, but just hadn’t detached it yet). We performed part of a run on our course and it was functioning properly. We placed the robot back at the starting point, and then it was not functioning anymore. So board B definitely stopped working sometime while actually on the course. The reason I tell you this is because it behaved and stopped working exactly the same as board A, but this happened even without splitting the board into its large and small components (which makes me question the idea that we accidentally knocked off some small components).

Hopefully this clarifies things a little bit. If still necessary I will post some pictures tomorrow when I get back to the lab.

I still think pictures would be helpful.

Sorry for the picture quality. It’s the best I could come up with. 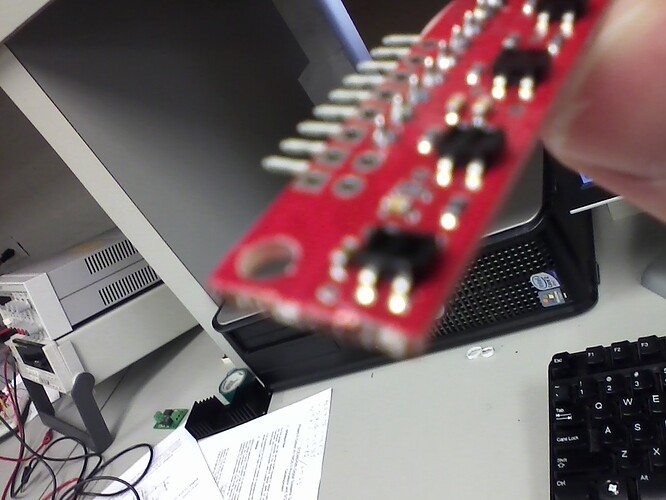 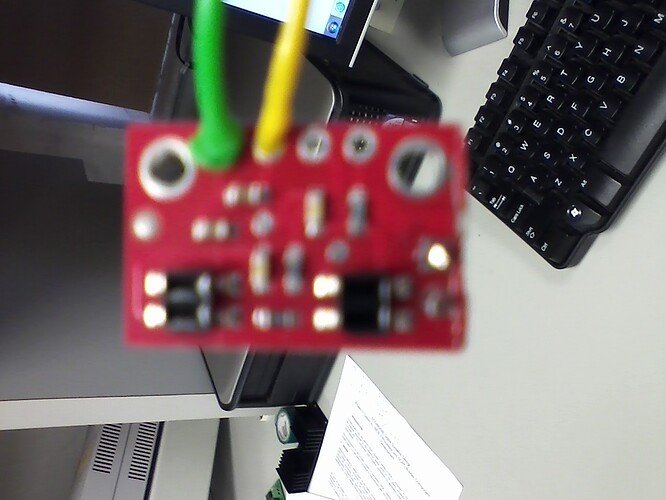 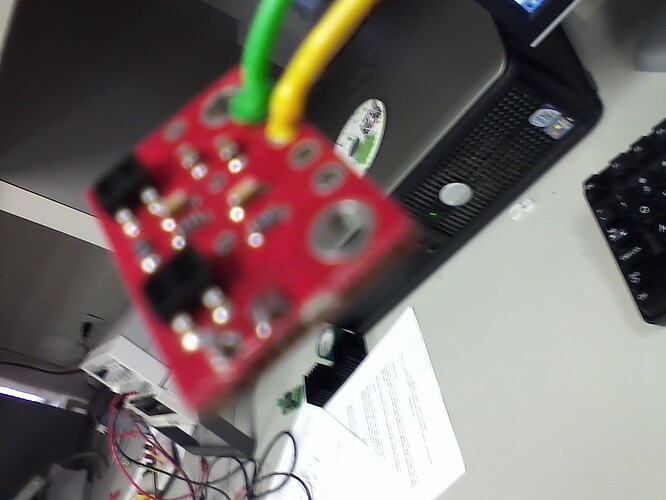 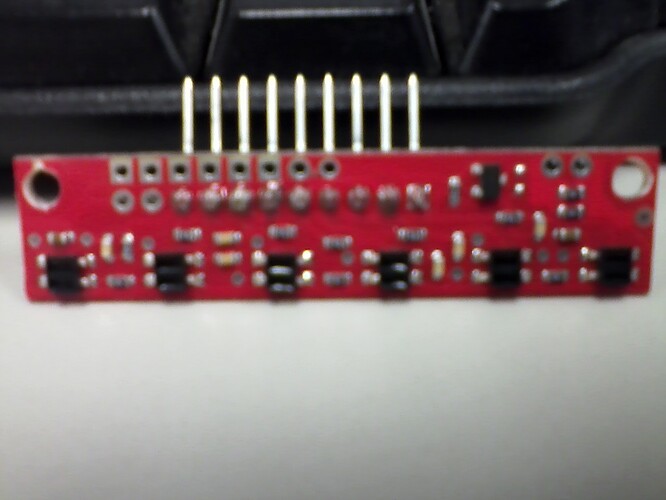 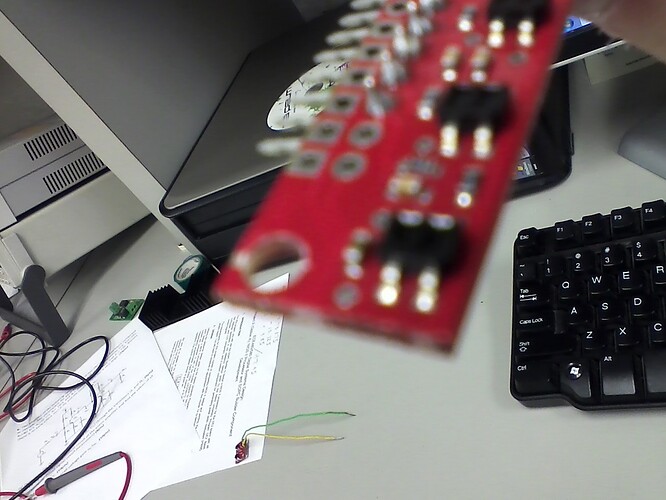 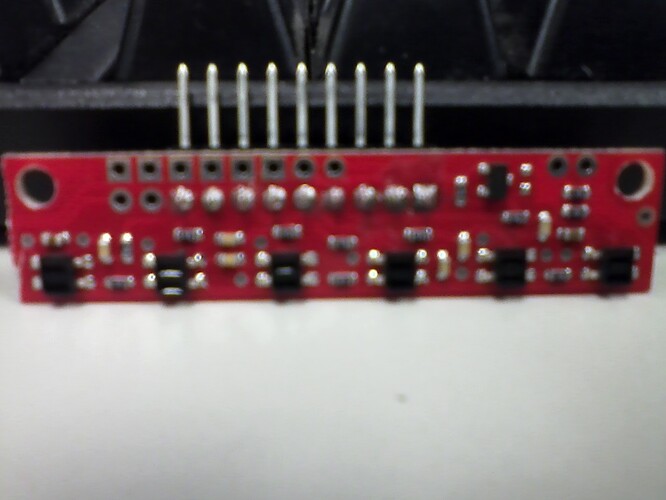 Here is a better picture. 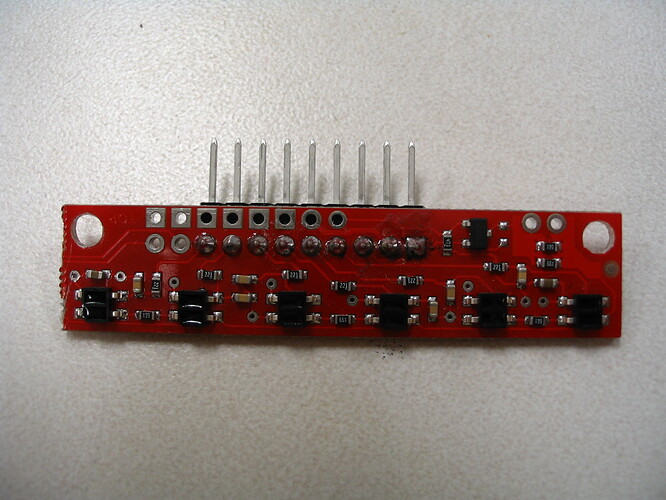 Thank you for posting those pictures (the blurry ones weren’t much help, but the clear one you just posted is very nice). I don’t see anything obviously amiss, but it would be hard to tell from that angle if a component were slightly lifted off a pad. Can you try to look at a shallower angle for anything like this?

You said you verified with your cell camera that the emitters are not turning on. Are you able to use that same camera to see the emitters of the functional 2-sensor arrays? As you can see from the board schematic on the product page, the emitter circuit is very simple. Can you use a multimeter to do some continuity tests to try to track down where the circuit is broken?