I want to drive four golf-trolley motors which are rated at 80W/12V. The rated nominal current is 7A, but the stall current I have measured at nearly 100A.
Two of the Qik 2s12v10 should be ideal for this, but I am a bit worried that if the motors got stuck or started suddenly, it could damage it.

Would this blow up the Qik, or does it have some sort of auto cutoff that could protect it?

Unfortunately, I think the protection features in the motor drivers would keep them from ever doing anything (your motors would just look like a short). We also don’t have anything similar that can handle larger currents, though such a controller is on our list of future products.

Hmm interesting… Are you saying then that a dead short across the output wouldn’t destroy the Qik?

Maybe in that case if I used PWM to soft-start the motors, I could drive them without hitting the overcurrent protection? If I used PWM fast enough then the inductance of the motor should prevent the current going over 30A, if say I started at 25% duty cycle.
Obviously I wouldn’t get the jump acceleration that is possible with these motors, but I don’t necessarily want that anyway. The gearboxes are 20:1, so starting at full blast would be a bit too jerky anyway.

The qik also has some acceleration options to do some of that smooth starting on its own. You could give one unit a try, but I really think that you’re going to need bigger drivers for golf cart motors with 100A stall current. You can look at the VNH2SP30 datasheet for more info on the driver.

Any idea when the pololu heavy duty driver might be ready?
Otherwise, is there one you can recommend from somewhere else?

I’ve seen cheapo chinese “brushed motor ESCs” that take RC input and claim 200A capacity in a tiny package (smaller than the Qik) at a fraction of the cost, but I’m not sure that I trust them. They also are asymmetrical for some reason in their current capacity (e.g. 200A forward, 100A backward).
e.g: cgi.ebay.co.uk/200A-EP-RC-Car-Pl … 19b4bdbf4f

By the way, they’re not golf “cart” motors, but golf “trolley” motors, i.e. motorised caddy, so not -that- enormous. 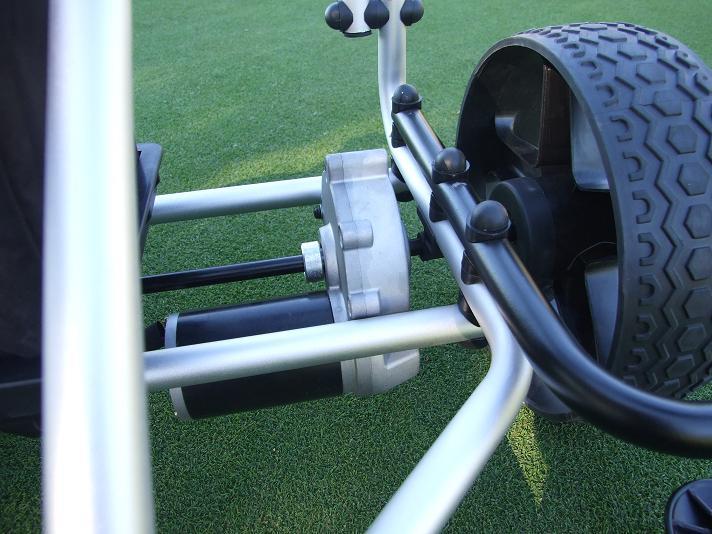 It won’t be this year. I think the item you linked to on ebay is worth trying. I’m a bit skeptical of the continuous current rating, but that kind of unit should be able to do a lot more than the qik. The asymmetry is not that unusual since many RC vehicles have a preferred direction of rotation. You can see six transistor packages in the picture; four are probably used for forward and two for reverse.

In case you thought it does, the qik doesn’t have an RC input (it only has a serial interface).

Actually, the RC interface will be more troublesome, but at least possible… I’m driving this from the AT90USB1287 chip on the Atmel USBKEY devkit.

It’s hard to find more info on that cheap rcps81710 controller online, but I finally did find one thread that mentioned it:
rcuniverse.com/forum/fb.asp?m=8005610
Turns out it’s pretty much as I expected - total rubbish, so I won’t be buying one.
It can only really do 20A according to that post. The specs are just lies.

I ordered one Qik anyway, to see if I can soft-start my big motors. If not then I have some smaller ones for a different robot that it will happily drive.
By the way, will the Qik’s serial interface function in a multi-drop bus configuration? I.e. can the units be assigned different addresses? Or will I need a separate USART for each one? (the AT90USB1287 only has one USART)

You can assign each qik a unique device ID and connect them all to the same serial line. The command protocols section of the user’s guide explains the Pololu protocol, which you will need to use if you want to have multiple devices on the same line, and the procedure for daisy-chaining.