Dear all,
I want to know if you know an efficient way to protect a signal conditioning circuit from EMI produced by wixel antenna working near the circuit.
In the picture below you can see my circuit: an opamp (ua741) amplifies an input voltage given from a miniature microphone and condition it (by means of a band pass filter) in order to feed P0_0 of wixel.
The problem is that when wixel is in transmission mode, there is a lot of noise in the signal (really a lot of noise! With oscilloscope I read peaks of about 2Vpp) and I think it appear because my opamp applies to the input signal a gain of 65-75 dB.

Is there a way to reduce this interferences? 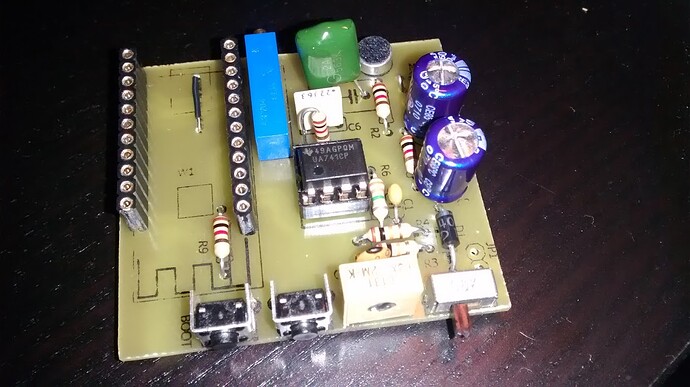 Nice looking board! Physical separation of the op amp and the wixel will help, plus you should shield the op amp and associated circuitry with a grounded sheet metal cover.

However, you simply can’t expect to get 65 dB or more gain from a single op amp without a LOT of problems, especially from a design as ancient as the uA741. That design is over 40 years old and has lots of undesirable characteristics, such as low output voltage swing, low common mode rejection ratio, low bandwidth, high noise, high input offset, etc.

If you need that much gain, it is better to do a two-stage design with a maximum voltage gain of 100 per stage. Post the circuit diagram or your requirements and perhaps someone can suggest alternative approaches.

This is the preamplifier schema:

By the way, I tried to enclose the circuit in a metal grounded box, keeping the wixel outside of it (by means of 5 dupont wires) but I don’t obtain any improvement.

The circuit looks well designed except for the extremely high single stage gain and the choice of the 741. Does the 741 actually function on a 3.3V single supply? The TI data sheet recommends a bipolar power supply, minimum +/- 5V, and the maximum output voltage swing is typically 1V less than the power supply in either direction (when operating on +/- 15V).

For very low power, single supply projects including active filters, I’ve been happy with the ICL7612 from Maxim. The unity gain bandwidth is only 44 kHz, however.

RF will get into shielded enclosures through wires. You can reduce that significantly by using ferrite beads on every wire that is intended to come out of the shield, and in the worst case, feedthrough capacitors as the wire passes through the shield.

Don’t take my word for it. If you want to have a very diverse group of professionals take a look at the circuit and make suggestions, post it on the EEVBlog projects forum. eevblog.com/forum/projects/

I discovered that the problem is not with EMI but with power supply: Using double power supply (e.g. Wixel powered by usb, or powered by a separate VIN source - obviously with common ground) the noise completely disappears. (The noise given by the opamp is about 30 mVpp)

Maybe the capacitors could not be sufficient, so I changed them: instead of C2 = 220uF I put a big 2200uF capacitor. In addition of it, I added another 2200uF soldered on VIN and GND pins of wixel and a 470uF capacitor soldered on pins 4 and 7 of the OPAMP. In this way the disturbance decreases: from 2 Vpp of the initial condition to 150 mVpp.

The circuit works with Vcc = 6V, 3V3 is used only for biasing the signal. I know limitation of the opamp, but when I was testing the preamplifier I never encountered these kinds of problems. Do you think that the two phenomena (low voltage supply and disturbances given from the istantaneous current request of wixel) could be related?

So, it isn’t an EMI issue at all. What is the nature of this “noise”? Can you post an oscilloscope trace, such that the waveform shape and the frequency can be determined? Even 30 mV p-p is a bad sign.

It is likely that the op amp is oscillating, which is a result of poor power supply decoupling and the stage gain being far too high. I strongly recommend that you abandon the single stage design.

There is lots of useful information on op amp amplifier/filter design on the web (random useful example: analog.com/media/en/training … MT-033.pdf) and if you don’t follow the rules, you will keep encountering difficulties like your present one.

Edit: I just noticed that in the schematic, C5 does not parallel the entire feedback resistance. This is a serious mistake. As presently designed this circuit will probably never work as you intended, but in any case you should closely follow the power supply and circuit board layout guidelines described in sections 10 and 11 of this data sheet: ti.com/lit/ds/symlink/ua741.pdf

Why do you say that C5 should be in parallel to the entire feedback network? I want to set, with R6, the minimum gain for the network. So, the feedback network works as expected.
actually my big problem is to eliminate the big noise that you can see in this image: 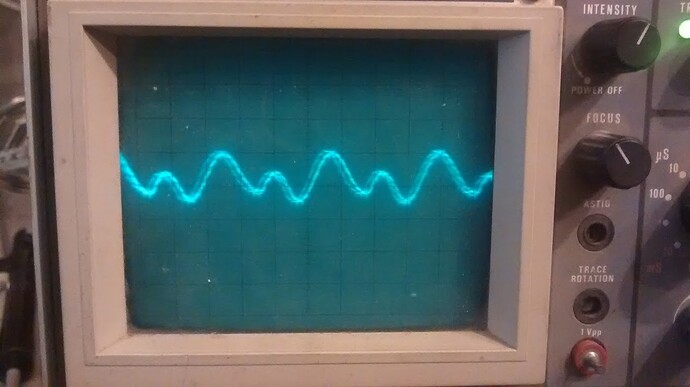 Time division is set as 1 ms/DIV and amplitude division is set as 100 mV/DIV. So, the wave has a period of about 3ms and an amplitude of 140 mV.
Note that 3ms is the average time distance between wixel transmissions. It seems that, when wixel goes in transmission mode, “steals” power to the amplifier, that begins to oscillate. Note also that if I remove the two big 2200uF capacitors that actually I soldered to VIN pin of wixel and to VCC pin of OPAMP the noise will increase up to 2 Vpp (instead of actual 140mV).

[quote]Why do you say that C5 should be in parallel to the entire feedback network?[/quote]What is C5 supposed to do, where it is now? But I tire of this discussion, so good luck!