Just want to make sure I’m doing this right… I’m staging up from simple connectivity to more complex.

First, I got the servo to move by using the Maestro Control Center connected with a USB cable and separate power to the servo pins.

Next, I got the servo to move by using the same hookups, but using a python script. All good so far.

Now I am trying to hook it up via wireless xbee modules. I am powering the servo the same way and I am using a 5V, 1A mini-usb phone charger to power the logic side with the USB plug.

The XBee is being supplied 5V from the +5V regulator output and it’s associated ground and the TX/RX are crossed over between the XBee and the Maestro TX/RX pins.

Is this a reasonable approach to hooking an XBee to a Maestro?

In the prior arrangements I saw activity on the green power LED and I saw the yellow TX/RX lights flashing. In this setup I see no light on the power LED and one of the TX/RX pins light up momentarily when I plug in the USB 5V. I can see activity on the RSSI light of the XBee so it seems something is being sent to the XBee.

I just want to make sure I’ve got the connections right before I go trying to debug the data I’m sending over the XBee.

Thanks for any tips,
Chris.

Perhaps an image of the connections; crude as it may be. I hope it makes sense. 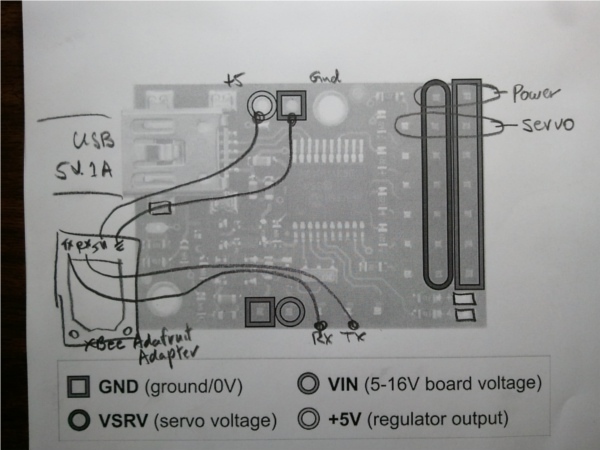 OK, so no response to my question so I continue to “try things”. Perhaps someone will see the errors of my ways.

Instead of powering the logic side (as opposed to the servo side) by a phone charger, I decided to see if there was any difference when I powered it from a USB line attached to a laptop. This is an independent laptop without any maestro software. So it should be acting like a dumb charger, right?

Now I see the green power LED is on (it was not on with only a charger USB) and the yellow LED is flashing (again, it was not with the USB charger).

So now the question is… what’s the difference between powering the device from a USB phone charger plugged into the wall and a USB cable plugged into a PC?

On the remote side I thought I could power the Maestro from a USB charger. Does this mean I need to build my own 5V regulator setup? I can do it, but would rather just use the 5V I get from the USB charger.

Thanks in advance for any tips,
Chris.

From the documentation about powering the Maestro:

In this configuration, if the computer (or other USB host) that the Maestro is connected to goes to sleep, then by default the Maestro will go to sleep and stop sending servo pulses. If you need to drive your servos while your computer is off, you can use the Never sleep (ignore USB suspend) option in the Serial Settings tab of the Maestro Control Center. Note that this will only work if the computer is supplying power to the USB port while it is asleep, and it will make your Maestro be non-USB-compliant.

What does it mean by “non-USB-compliant”?

Is a USB charger “non-USB-compliant”?

Now I set the “Never Sleep (ignore USB suspend)” setting ON and Apply.

What I see is that both the PC powered USB and the charger powered USB turn on the flashing yellow light, but they also set the Error light. As soon as I plug in the USB, the red Error light comes on.

The green power light is only on when the I’m powering from a laptop, not from the charger USB.

It sounds like you are trying to do a lot of different things at the same time. I recommend simplifying the problem a bit, e.g. first getting the Maestro to turn on correctly with the USB charger and NO XBee, controlling it with a direct wired connection (still no XBee), and then finally adding in the XBee. Anyway, I can try to address some of your questions and problems:

Does that help?
-Paul

It helps a lot, Paul.

I was looking in the Command application to see if it would show what it was sending to the Maestro, but that has eluded me.

I’ll keep posting what I find for future reference.

Here’s some sample python code that works with USB on COM6.

The final power pin arrangement was just like the drawing above. I hooked up a 12V 1A wall wart to the servo PWR and GND pins and a phone charger (5V 1A) to the USB plug.

There is no voltage regulator on the servo pins; just the raw output of the wall wart.

The XBee is being powered by the 5V out pin and the associated GND. The XBee TX/RX pins are being crossed over to the Maestro TX/RX pins; meaning TX on XBee goes to RX on Maestro, RX on XBee goes to TX on Maestro. As I understand it, you don’t actually need the RX on the XBee connected to TX on the Maestro unless you’re trying to read data back from the Maestro. In this setup, I’m just trying to make the servo move from 0 to 180 degrees; one way communications.

Wondering if it would be safe to connect that unregulated 12V to the Vin plug so I wouldn’t need the USB input?

I’ve connected a giant servo (perhaps overkill - GWS S689-2BB/MG/JR Giant Servo) to turn a damper in an air conditioning vent to see if I can temperature control the opening and closing of a vent to any given room in a house.

In my code, I created some values that represent the maximum and minimum range of the servo. You can see them as:

Then there are some other values (see code above) that I have no idea what they mean, but I needed them in the original sample code I found. The original range was from 500 to 5000.

Can someone please explain the relationships or point me to the documentation that relates these three range values; angle, µs, and whatever the 3rd value is?

Thanks in advance,
Chris.

So, does this mean that you have wireless communication with a Maestro working? If so, great!

Anyway, the code that you started with was for a different servo controller, and phrases like “absolute position in 8-bit mode” do not apply to the Micro Maestro. If you look at the documentation for the command 0x84 that you are using, called “Set Target”, in the User’s Guide, you should see that the units are quarter-microseconds. As for converting microseconds to an angle, that depends on your servo, and the conversion factor is not usually specified. You will have to calibrate it yourself.

12V is way too much for normal servos, which are usually designed for operation up to a little over 6V. The Maestro itself, however, is fine with a regulated 12V on Vin. Most wall warts these days are regulated - if yours is not, you should check the actual voltage coming out of it before connecting it to the Maestro.

By the way, if you do power the Maestro using Vin, you should note that the 5V output will be limited to about 20mA, which is likely to not be enough to power your XBee.

Yes, I have it working. Wirelessly.

I am powering the servo side with a simple 6V 500mA wall wart.

While the XBee uses only about 50mA in receive mode, it’s still a bit more than the 20mA you referenced so I am powering the logic side with a usb phone charger 5V, 1A.

My exercise was to show how it would be possible to control a damper in a heating duct. The duct/damper was purchased from Home Depot and it had a 100V to 24V transformer and a motor to turn the damper. You apply power and it mover the damper. To keep the damper closed, you had to keep power applied.

I removed the transformer and the motor and hooked up the GWS S689-2BB/MG/JR Giant Servo. I think it’s overkill, but I’m still learning how these things work.

I’ve been running a wireless sensor network to track various environmental values in my house; temperature, light, air quality, plug loads, etc. I send the data to sites like Cosm (was Pachube), Thingspeak, Open.Sen.se, etc. for storage and charting. I am using a wifi router re-flashed with OpenWRT and with python added as a scripting language. The sensor boards have an xbee radio and send up to 4 sensor readings each.

This is my first experiment about how to go the other way and control things based on the data I collect. Lots of fun to come.

I plan to show how I did this at the upcoming Maker Faire next weekend so thanks for your help. 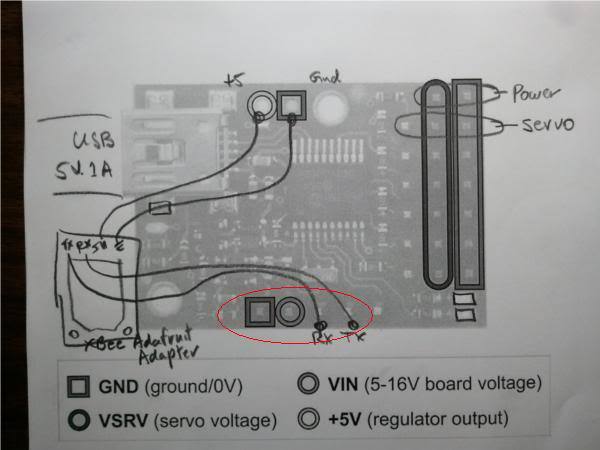 The circled pins line up conveniently with the pins of the xbee explorer (power regulated - 3.3-16V input) board. I use a 4-pin female/female jumper wire to connect them which keeps things neat on my airplane and quadcopter. You could also use a 3-pin jumper if you don’t need feedback from the servo controller.