hi sorry for the english but i’m young italian, i’m working on it.
I have a problem whit the QTR library ,maybe , i’m working with Arduino UNO and i have TWO QTR-1rc , i 'm buliding a line-follower but , the code give me always -1000 on the serial monitor and it doesn’t see the black-white change
this is the code thanks for the help

ok , and how the calibration works ?
i tried this , but it does’nt work

it is correct ?
thank you for the help

That code will calibrate the sensor when it is in a certain setup, but I do not know if that is the right code for your particular setup. Could you tell me more specifically what you are trying to do with the sensor? How do you have your sensor connected to the Arduino? What process are you following when you try to calibrate the sensor?

Hey, we are working with pololu sensors(QTR 8rc) sensors for the first time to make a line follower robot.
We uploaded the QTRRCExample code from the library for calibration.
Can you help,by telling us what we can infer from the values(screen shot of serial monitor and connections enclosed) and how to use them in our line follower code?
Thanks

here are the pictures of the serial monitor readings . 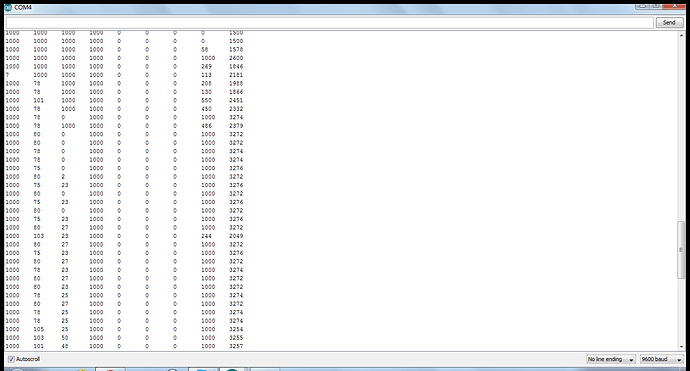 For line-following, you should keep track of the where the line is and the algorithm should try to maneuver the robot so it tries to center the line on the sensor array. You can find line-following examples for the QTR sensor here.

Hey Jeremy,
Thanks ,that was informative.I saw a few codes online which use the value(750) to indicate a logic high.As in,if the value of the sensor reading is over 750, it is over a black line.So,can i interpret my readings a similar way? From our calibrated readings,can we take a similar value?? And can the emitter pin be off for QTR 8RC sensors? 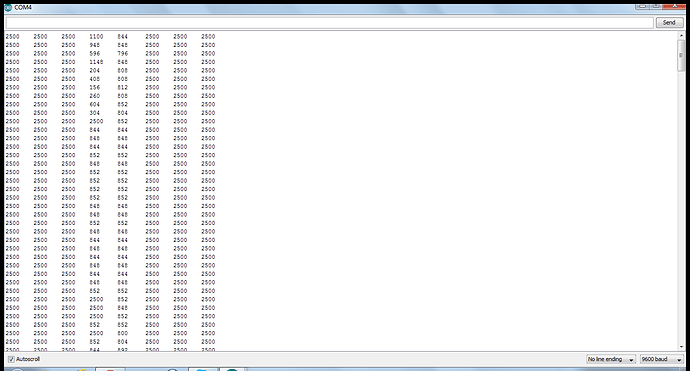 It is possible that the IR LEDs are not functioning as expected. A cell phone camera can usually pick up infrared light. Could you try using your cell phone to see if all the LEDs are lighting up? More information on this can be found here. Separately, you can test to see if the IR detectors are working by holding them up to a good IR light source like a sunny window to see if the values change.