Are you supposed to be able to use seperate logic and motor power on this? I tried, and could not get to work.
Works fine using same 12v and regulate down the 3v logic.

Yes, the board will work with separate logic and voltage supplies (there is nothing fundamentally different between this and using a regulator to get your logic voltage except in the regulator case your power supplies already share a common ground). Can you describe your connections in the setup that you thought should work but didn’t?

Thanks. I ended up getting it to work as shown in image.

I do have couple questions. 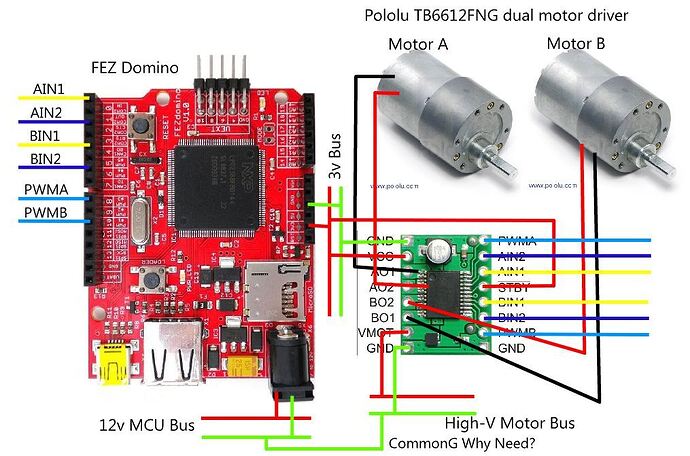 All of the grounds on the 1201 are internally connected, so your two power supplies won’t be fully isolated. Back EMF shouldn’t be a problem for your MCU supply, but motor noise could affect your signals and connected power supplies. Even if you had full electrical isolation, however, motor noise could still induce noise in nearby wires. There are a number of steps you can take to reduce the effect of motor noise on your system if it ends up being a problem (solder 0.1 uF capacitors across your motor terminals, route power lines away from signal lines, keep your power/motor leads as short and thick as possible, twist your motor and power leads around each other and/or add a ferrite bead).

By the way, you aren’t actually using the motors shown in your diagram, are you? The TB6612FNG motor driver would be underpowered for those motors.

“Given the connections shown in your diagram, you should not need the extra link between your grounds of your two power supplies. Maybe your connection between the MCU’s ground and the motor driver is not good? Can you show a diagram of the connections you think should work but do not?”

Hi Ben, thanks. The diagram already showed what I think should work but does not. I think I should be able to remove the gnd between rails at the very bottom. But can not. I have tried different wire, and reconnecting. But no joy. Not a big issue. Just at this point, it has become a vendetta to figure out why.

Your diagram shows a scenario that you said was working, so I was hoping to see the version that doesn’t work in case I’m not quite understanding what is going on. I’m imagining that you’re only removing the link between the 12V MCU bus ground and the High-V motor bus ground, which shouldn’t cause any problems. However, if you’re going further than that and removing the connection from the High-V motor bus ground to the motor driver board, then your problems would make sense.

My main suspicion is a bad ground connection between the MCU board and the motor driver (e.g. maybe there’s a bad solder joint on the motor driver’s upper-left ground pin?). Can you remove the extra ground connection between your two power supplies and use a multimeter to do a continuity check between an unused ground on your MCU board and the unused ground pad on your motor driver board? It also might help if you posted a picture of your system showing the setup you expect to work but doesn’t.