I was poking through the docs for the AVR Dragon, basically trying to figure out the wiring pattern for the devices I’ve got stashed on my workbench, and I realized the Dragon’s ISP header should let you use debugWire on the Orangutan and Baby-Orangutan.

The only concern I saw was in the caveats of debugWire mode for the Dragon, which requires the DWEN fuse to be set:

Note: Some precautions regarding the RESET line must be taken to ensure proper communication over the debugWIRE interface. If there is a pull-up on the RESET line, this resistor must be larger than 10Kohm, and there should be no capacitive load. The pull-up resistor is not required for debugWIRE functionality. Other logic connected to the RESET line should be removed.

I looked at the schematics for the Orangutan and Baby-O, and saw the pullup was a 10k and there is a capacitor between the reset pin and ground. I’m reading this to mean that using the Dragon to talk to an Orangutan or Baby-O with debugWire is not a good idea. But before bailing on it, I wanted to see if anyone else had tried this.

You could try removing the capacitor. On the Baby O, the cap you want is the fourth part from the bottom in the column of 0603 parts along the upper-left side (when the ISP connector is on the bottom). The 10k resistor (it says 103) is right above the cap. The connection to those parts runs under several other parts and to a via right above the mega168, so you can safely cut off those two parts by cutting the trace on the top side. This will still give you access to the reset line on the ISP and through-hole pads. The net is highlighted in the picture below:

We’ve used debugWIRE with the JTAGICE, and it’s very nice, so you should try it! (Just make sure not to cut PD0.)

Mmmmm… I might go that route if I wind up sacrificing a Baby-O to the Dragon. (That felt about as weird to type as it probably sounds.)

I’m guessing the reason they don’t want the capacitive load is it basically low-passes a fairly high speed communication line?

Yeah, I can’t wait to play with it. The simulator in AVR Studio is all well and good, but I’d like to be able to see what happens when ADC signals change, when an SPI or I2C device talks on the bus, etc. debugWIRE looks nice. Good to know it really is!

We got a request for a corresponding drawing showing the reset line routing for the newer B revision. (Note that the reset line also goes to the motor driver standby line.) 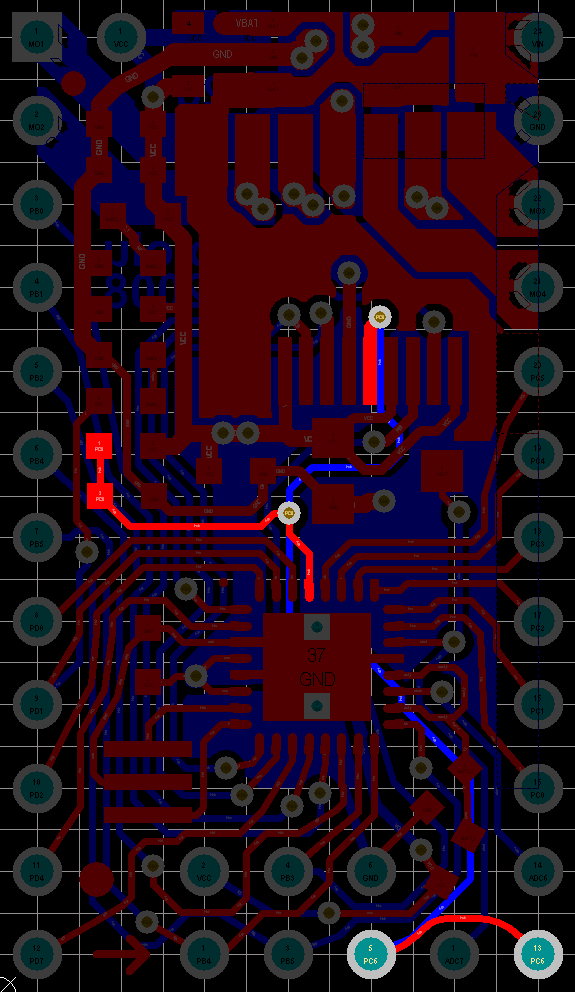 So, on the Baby O rev B, the cap is the lowest of the column at the upper left with the resistor next?