I am atempting to program the Baby Orangutan with the Arduino IDE according to Pololu documentation. I have installed the IDE add-on and can see the new features: Orangutan board, programmer, and examples. However, upon trying to upload the blink sketch I get the error message:

I am using Winows XP w Ser. Pack 3. The Orangutan is powered and nothing is connected to it but the USB AVR Programmer (1302). The red & green LEDs of the Orangutan are both on. The green pwr LED of the programmer is on and the red LED is flashing.

Where have I gone wrong or what have I failed to do?

I am sorry you are having trouble programming your Baby Orangutan with the Arduino IDE. From the error message, it looks like your Arduino IDE is unable to locate its AVRDUDE executable file, so there might be a bug with the IDE. I recommend that you upgrade to a newer version (1.6.4) to see if that fixes the problem.

If you keep having issues after installing the latest version of the Arduino IDE, can you search for avrdude.exe in your Arduino IDE files (e.g. C:\Program Files\Arduino) and post the full path to it here?

Alternatively, you could try putting the correct path to avrdude.exe into the platform.txt file that comes with the “Pololu Orangutan and 3pi Robot add-on for the Arduino IDE” download to see if it changes anything. You should be able to find the platform.txt in the libpololu-arduino folder that you copied into your sketchbook folder.

Also, if you do not already know, Windows XP is no longer supported by Microsoft. It would be good to consider upgrading to a newer Windows OS.

I am back at this problem again. I installed Arduino 1.6.4 and the Pololu add-on and everything appears as described in your documentation.

However, when uploading the simple Blink sketch, I get a new the error message:
avrdude: stk500v2 command(): command failed
avrdude: initialization failed, rc=-1
Double check connections and try again, or use -F to overide this check.
Connections are okay and I don’t know to use the -F overide.

I notice that there are 3 separate avr files in the Arduino hardware folder. One in the sub-folder, Arduino, one in Tools and one in libpololu-arduino.
Is this as it should be?

Can you run the AVR programmer’s configuration utility and post the error message that you get here?

I notice that there are 3 separate avr files in the Arduino hardware folder. One in the sub-folder, Arduino, one in Tools and one in libpololu-arduino.
Is this as it should be?

Yes, those AVR folders are fine.

I ran the configuration utility and did not get an error message only a screen identical to that on page 32 of the Programmer User’s Guide. The only difference was Ser. #, mine is 00068042.

I have run the configuration routine after a failed upload–red LED is on steadily.
I do get an error message which I don’t understand. See attached screenshot of config. rountine. 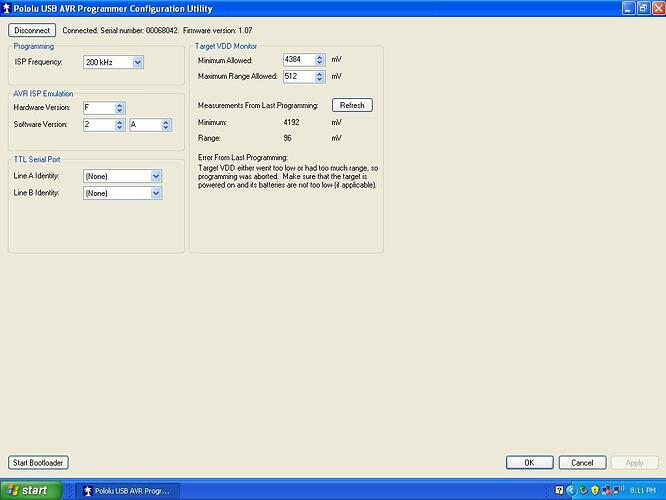 That error message means that the voltage of the power source you are using to supply the programmer is too low. What are you using as a source for power? Can you post pictures that clearly show your connections?