Attached is an image describing the configuration of a multi sensor project. In summary, the sensor devices acquire signals from externals ADC (using SPI) with an acquisition rate of 2000Hz maximum (with 3 bytes by sample). The network could have up to 10 devices sending data simultaneously to a master device connected to a PC (using USB). 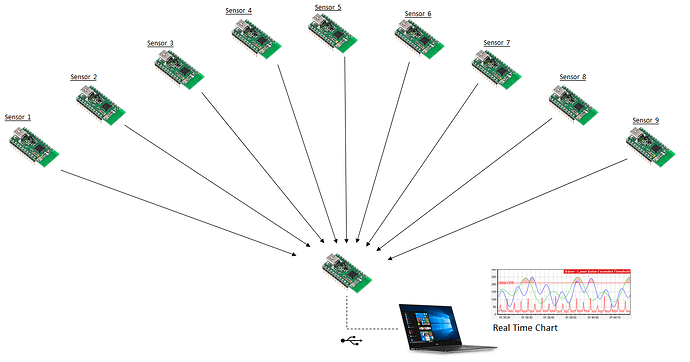 The Wixel device/SDK seem a good option to develop this project.

I have some questions/comments regarding the capabilities of the device and SDK:

Thanks for your feedback,

Thank you for your interest in the Wixel. We have not tested the performance of a setup like the one you describe. We did test the performance of the Wixel’s Wireless Serial App running on a pair of Wixels, and found that it could send about 10 KB of payload data per second, as documented in the Wixel User’s Guide. If you are trying to read from 10 sensors at 2000 Hz, with 3 bytes per sample, that would be 60 KB of payload data per second, so I do not think it would be practical to do that with the Wixel. If you can use a significantly slower sample rate, then you should be able to get something to work.

The more data you try to send, the more packets will be lost due to collisions where two Wixels are trying to transmit at the same time. Radio packets can also be lost due to other forms of radio interference. Please note that the wireless_adc_tx and wireless_adc_rx apps use the radio_queue library, which means that radio packets will not be retransmitted when they are lost.

Hi David,
Thanks for your quick reply. Appreciated.
Julio