No readings from right prox sensors

The class is starting to work on Sumobot competition by looking at the values that the proximity sensors return. We are using the simple app below. It works fine for 15 robots but two are not returning any values for the right and center_right sensor. i have checked that the right sensor is jumpered to pin 4.

Is there something else I can look at on these units?

/* This code allows us to explore how the robots find each other. */
#include <Zumo32U4.h>

//create an instance of the LCD
Zumo32U4LCD lcd;

The fact that you are getting counts from the front sensors with the left LEDs but not with the right LEDs suggests there is a problem with the emitters. Could you check what the emitters are doing with a camera? (The camera on a cell phone might work best; standalone cameras tend to have IR filters.) Could you also try pointing the IR emitters from a working Zumo at the detectors on the Zumo you are having trouble with to see if you get a response?

Thanks for the quick response Patrick. I tried both the phone camera and another emitting robot and neither elicited a reading on one side.

Hi,
I assumed that if the camera uses IR for range finding, it was on whenever the camera is on. There was no effect on the readings on the robot on non-functional sensors. On the functional robots, there was no change that could not be explained by the proximity of the camera itself. Is there something more I need to do to get the phone to emit IR?

What is the correct orientation of the LEDs? On this robot, one side has the Anode forward and on the othe 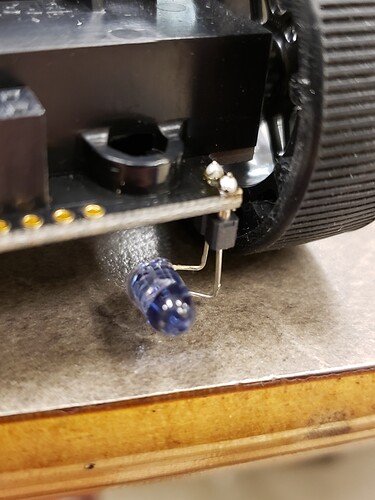 The cathode should be forward on both sides. Can you fix that and try again?

Just to clarify, I was not saying that you should test the Zumo’s sensors using your phone; your phone will not emit IR light. I was hoping you could use your phone to verify that the Zumo’s emitters are working by using your phone camera or another camera to detect IR, which may or may not work if your camera has IR filters. If your phone does not have IR filters, then you should be able to see a glow around the IR emitters when you take a picture. You could take a picture of a powered Zumo you know to be working to check if your camera will show the IR light or not.

Hi Patrick,
Ah - I clearly missed the point on the phone. My Samsung doesn’t seem to have an IR detection mode - at least that is documented.

Both robots now work with the anode forward on both sides. Thanks for your help with this. For one, the LED was in backwards and for the other, the LED contacts had become unseated when the front blade came loose.

Also, I dont know how much of your market is to classrooms but if it is an interesting market for you, here is a simple product suggestion for those who buy large numbers of robots and turn teenagers loose on them - a repair package with assorted nuts and screws and washers. A number of things have fallen off in use and I live in fear of not being able to find all the parts and pieces.

Thank you for letting us know you got it working and for the product suggestion! We do have many parts for our robots available separately for ordering as replacements. If you ever need to replace some parts for which we don’t have replacements available online, just email us and we should be able to help you out.