I need to be able to control up to 20 devices (Wixel Programmable USB Modules) from a master PC connected to one Wixel module.

I do not see any reason why you cannot do one-way communication from one Wixel connected to a PC to many other Wixels within range. As far as programming, you might start out by reading through the subsections of the “Writing Your Own Wixel App” section of the Wixel user’s guide if you have not done so already. It contains several links to helpful resources, including the Wixel SDK and the Eclipse IDE that we recommend.

I have taken a cursory look at the manual but, will look closer.

From what I read in Section 9.b, it looks like the Wireless Serial App can be used for this application. Does this sound reasonable? With this App loaded, how does one tell P0_1 (or any I/O line) to go high (or low) on channel xx?

Our Wireless Serial App only does radio communication between two Wixels, but another forum member was able to modify it so you could change the radio channel on one of the Wixels using a USB command (effectively allowing it to select which Wixel it is communicating with). You can see his post about it here. By the way, if you all want to do is control the I/O lines on the receiving Wixels, you might try looking at the I/O Repeater App for an example of how to go about doing that.

Thanks. I will take a look. The User Guide indicates that this can be done if one separates by 2 channels to prevent crosstalk. If you have a few minutes I would like to explain the entire topology we need and let you advise me. If so. Please call at
334.399.6142

Is there an active X (ocx) that can be used with VB.net ? If not, how can I use the Serial App in my VB code?

See the diagram below. MC’s can be Wixels or Arduino. 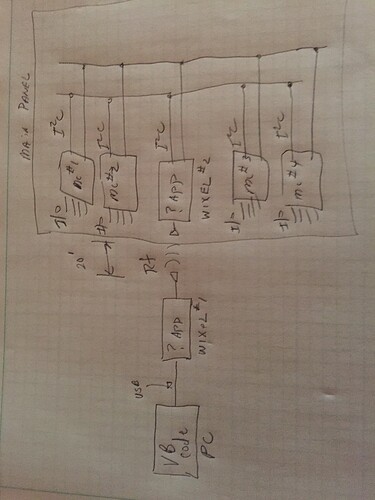 It is not entirely clear what you want advice on. If you have specific questions about how to use the Wixel, we would prefer to continue discussing it here. If you are asking for more general engineering advice, that kind of advice is typically beyond the scope of our technical support.

The Wixel does support I2C; you can find an example in the “Serial-to-I²C App” section of the Wixel user’s guide.

We do not have an ActiveX control for the Wixel with VB. You should be able to communicate with the Wixel from your VB code through the virtual COM port without it. You might find this reference page from Microsoft helpful.

To get started with the Wixel I have two Wixels connected to two USB ports on my PC. I have two instances of Hyperterminal running one using COM5 and the other using COM6. I gave loaded the USB to Serial App on both wixels. This doesn’t appear to work as I can’t type on one hypertrm and see the characters on the other. Both use 9600 BAUD and 8 bits. Do I have the correct App loaded in the Wixels?

it works with the Wireless Serial App.