I’m hoping to get some product suggestions a motor & possibly control system.

I was looking at some items on your site LP12V 48CPR, 4.4:1 6V but hoping you may have suggestions. I know an encoder will be required to ensure the speed auto adjusts to maintain desired outputs.

My main priorities are:

Although I’ve got lots of Arduino experience, my motor expertise is limited. I’ve also looked into drone, RC & CNC motors. Open to any suggestions, Thanks!

We do not have a good way to estimate the kind of mechanical load the strips you are rotating would put on the motor, so we cannot say whether those are a good match. Also, if you want multiple strips to be in the same position at the same time (or precisely out of phase with each other), you probably want some type of position control rather than just speed control.

In general, it is possible to get speed and position control from a brushed DC motor if you are using feedback. You would monitor the rotation rate and adjust the input power to make the motors spin faster or slower. Our jrk motor controllers can use feedback from one of the two encoder channels in a PID algorithm (which you can read more about in the Jrk user’s guide) for speed control. The RoboClaw motor controllers we carry can use both channels of the encoder to perform position control with a brushed DC motor. You could also implement your own system on an Arduino.

Stepper motors, in general, require less sophisticated control algorithms for precise speed and position control. You simply send a voltage pulse to a stepper motor driver and (if the torque required to move the load is well within the torque the motor can produce) the motor will move a fixed increment, so feedback is generally less important. Unfortunately, the torque a stepper motor can produce decreases with speed and it might be difficult to find a stepper that can operate at the speeds you mention (1800 RPM) with a direct drive system. Also, stepper motors generally have longer lives than brushed DC motors (the brushes themselves wear out).

We do not have any brushless motors or controllers for them, but I have heard of some products that appear to be able to perform speed and position control with them.

Thanks for the detailed input and links. I have read through everything thoroughly.

I entirely understand that the unknown mechanical load is a key factor. I can only speak to the fact it would mostly be air resistance of spinning a light weight panel approximately 3" by 30".

Your mention of Position Control would be very helpful. Does this only ensure it can stop at that precise angle, or if multiple motors are spinning at the same speed, is it possible to ensure they are closely at the same angle of rotation if frozen in a photo?

After some 3D sims I have realized the desired RPM could be halved to 900 RPM. I anticipate each motor needing to operate at 1 or 2 RPM slower than the motor beside it. This would have 6 motors spinning between 887 RPM to 900 RPM).

I believe I will require Brushless or Stepper to try and keep the noise down and last longer. Simpler algorithm speed control with Steppers would be ideal.

Is that realistic at all with a 900RPM requirement?
Do any products come to mind that might work?

Looking at it a little more carefully, the primary purpose of the RoboClaw’s position control is to reach a specific position and stop, which sounds like it might not be very useful for your application.

Our #2267 NEMA 17 and #1474 NEMA 23 stepper motors might work at 900 RPM if you use a high enough voltage supply. The pull-out torque curve in the datasheet for the #2267 NEMA 17 motor shows about 20 N*cm of torque from the motor at 5000 half-steps per second (using a 24V supply), which is about 750 RPM and higher voltage supplies allow faster speeds with stepper motors. This thread here on our forum might be useful for more information about getting stepper motors to work at high speeds.

Stepper motors tend to hum at the frequency of the step rate so using finer microstepping to smooth the motion and increase the step rate above audible frequencies might help. Also, using a lower current limit (which will decrease low speed torque, but should not interfere with higher speed operation) will also decrease the volume of the humming.

Thanks again for the additional details, its greatly appreciated.

After more tests I’ve realized a target speed of 600 RPM (and variations for 10x motors between 585-600 RPM) will work by changing the build to be triangular (see img).

The Roboclaw’s position control could work to ensure if the piece is OFF they are in the same resting state, but believe brushed motors are louder which is an issue.

Re pull-out torque curve, I’m not entirely sure how to read this to discern RPM, but will continue reading more since I need to know it.

Your reco is great thanks. If i downsized to Nema 14 and A4988 do you have any major reservations? 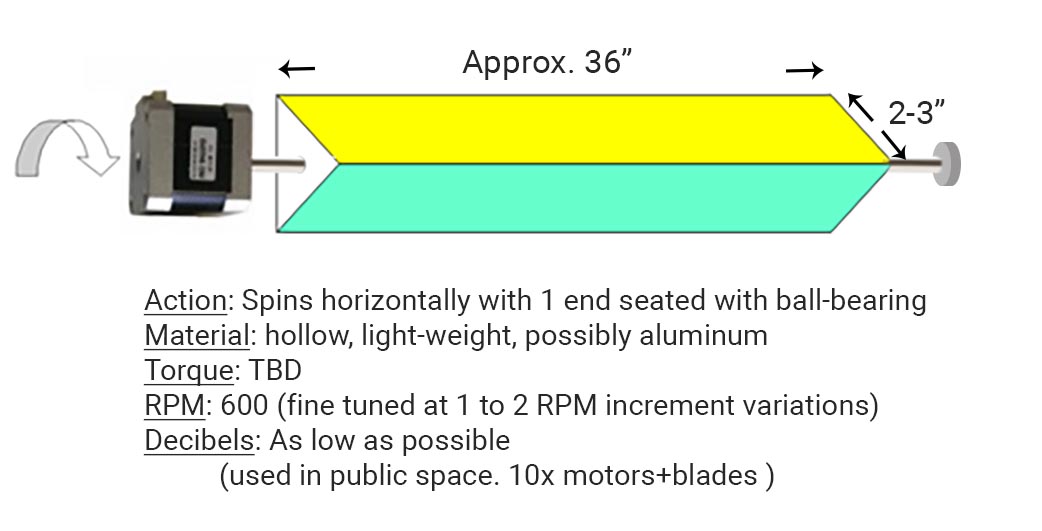 The pull-out torque curve simply shows torque vs rotation speed. If you look at the datasheet for the NEMA 14 motor you linked to in your last post, you’ll see that the torque at the end of the graph at 3.2K pulses per second (which, in half step mode and with the motor having 200 steps per rotation, is about 480 rpm) is only a fraction of the initial torque and it is likely that the practical speed limit for the motor under the conditions shown there is a bit less than that, even with a very light load. The forum thread I linked to before has some discussion of how those pull-out torque curves relate to achievable speeds. The electrical properties of the motor coils in our #1209 NEMA 14 motor make it a better choice for high speed operation.

The A4988 driver should be capable of driving either of those NEMA 14 motors.