Robotics and electronics discussion Share your projects
jwatte August 13, 2017, 3:35am #1

In addition to my walking remote control airsoft robot, Onyx, I also pour love, time, and money into an autonomous rover, nicknamed “The Money Pit.” I’m currently up to version 5, called “V for Victory” because I’m great at modesty!

I placed 2 out of 20 at the autonomous race meet-up in Oakland today. Here’s a training run (I don’t have video from actually competing, because I was focused on other things then!)

In addition to driving on race tracks indoors, this chassis is intended to be robust. It can, for example, climb stairs!

Here’s a glory shot of the 'bot: 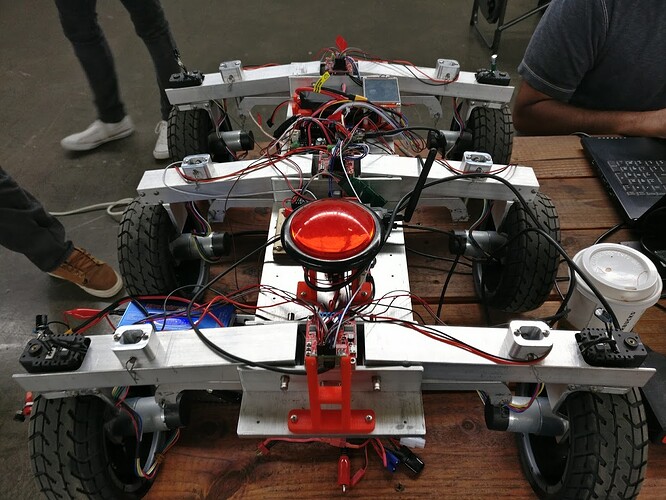 The bot is using a variety of components from Pololu:

It also uses a number of other parts:

Now, if I had to ask for something, I’d love to have motors one size stronger than the current 37D, still with gear boxes and encoders. I’m currently speed limited by the power of the motors; I tried 35:1 gearing and ended up burning out those motors, so 50:1 is the lowest gearing I can go, which with 7" wheels ends up with about 1.5 meters per second top speed.

And if I could ask for something else as well, I’d like a better fastening mechanism than D shafts, because there is a bit of a “wheels coming off” problem. I use 6mm reamed 24mm hexes to adapt to the wheels, and two 3mm set screws, but there’s still a sideways holding force problem: 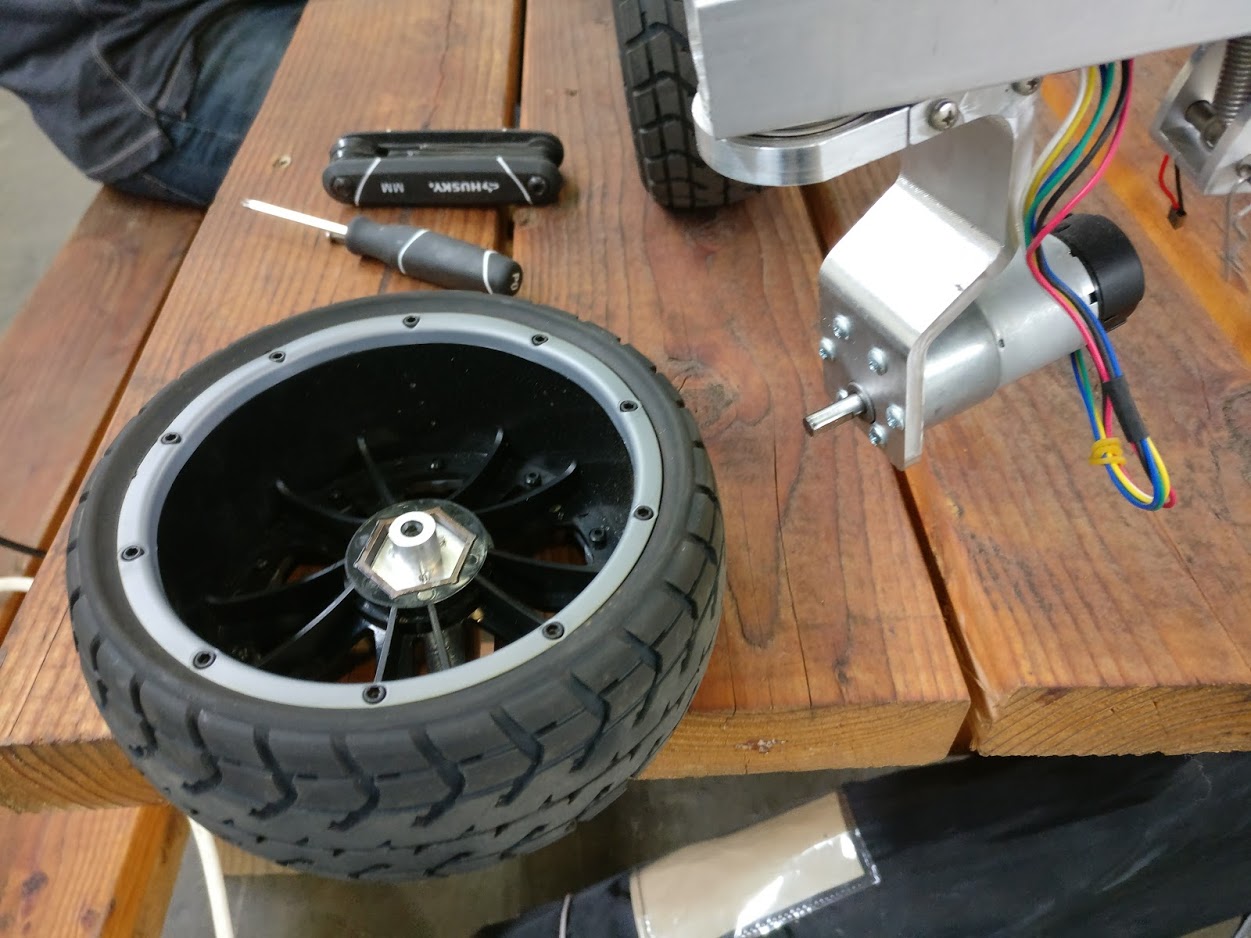 Maybe I’ll put a 3mm hole in the shaft itself for the set screws to dig into, or maybe even just use a regular M3 screw at that point?

where did you get the wheels?

Good question! Took a while to find them, because I wanted slick wheels that won’t catch when turning in high grass.
They are pavement front wheels for 1/5-scale “Baja” type buggies; these particular ones are from King Motor: http://amzn.to/2w4N2JH
I got three pairs. They use 24mm hexes, so I machined 6mm hubs to adapt them to the Pololu motor shafts. I think someone actually makes such adapters these days, but I couldn’t find them and the whole point of this hobby is to make my own hardware

V for Victory looks awesome! Thank you for the feedback about our 37D gearmotors. We are currently looking into adding higher-power gearmotor families to our catalog, but it will probably be at least a few months before we have something available.

Have you considered increasing the supply voltage some to get a little more power out of the motors? If you increase the voltage a little on your 50:1 gearmotors, you could get a little more speed without raising the average current (though it would probably decrease the lifetime of your gearmotors and put them more at risk of catastrophic failure should the gearmotor get stalled).

Thanks for the note! I’ve previously run them at 4S (16V fully charged.)
Unfortunately, your prediction is correct: overloading them kills them through overheating at that voltage.
(One of my test tracks is a very steep driveway)
See, this is why I think Pololu should start making brushless controllers and sell brushless motors.
Why should the RC car people have all the fun? The brushless ESCs are cheap and cheerful, but only accept PWM input (boo hiss!) and don’t let you read back the commutation count in lieu of encoders (ack pfflt!)

I’m considering getting some brushless RC motors with encoders, both because they run smoother than sensorless, but also because I can then tap into the Hall sensors of the motor itself to get a read on how much it’s rotated. Doing direct drive onto 7" wheels would still be a heavy load on the motors, so I’m still feeling there’s a space available where you could sell:

I’m sure you can find suppliers for the brushless motors (whomever makes the Turnigy and Integy brands come to mind.) And there are enough chips and reference designs that a “smart” two-way brushless controller wouldn’t be too hard. Roboteq sells some, at $500+ pricing – I’m rooting for you guys to give them a significant pricing shock

If I were in my young carefree years, perhaps I’d even try to make that myself, as there’s sure to be a business there of some unknown size. But you guys have all the eyeballs and name recognition already, so I’d much rather just prod you into doing it!