Well, I can’t really see from the picture how everything is connected to power. Are you sure that both the Maestro and the ShiftBrite are connected to the power supply?

Checking the serial mode is irrelevant (since you aren’t using serial commands) and “enabling” the lines just means you are setting the outputs to some values, which is not useful - your script will do that anyway.

I guess it’s possible that the first command is getting corrupted - you could try sending it continuously in a loop like this:

Have you seen any light come out of your ShiftBrite at any time?

That new line makes the script run, the little red triangles bounces all over. The stop scrip button is red now. that never happened before. The yellow led on the maestro flashes twice quickly in a repeating pattern which should mean one output is high. I checked the voltage on the output side of the shiftbrite and I have 6.1V

I saw the led light once when I disconnected the usb cable from computer the led glowed and got hot and I disconnect it from cable.

How can I test my shift brite leds to see if they any good?

I would still like to figure out how to turn them on and change colors with the maestro.

Hello,
I tried your configuration file with a Maestro and ShiftBrite over here, and it worked fine exactly as you posted it - I plug it in to USB, connect power, and click the “Run script” button, and the LED lights. I am very worried by the way you said the LED lit up and got hot when you disconnected it from USB. Mine does not get hot even running at full brightness and 6.1V. Does your Maestro run correctly when disconnected from USB?

What is the power supply that is giving you 6.1V? Can you take a picture, maybe zoomed out a bit more than your other ones showing how it is connected to everything? Did you ever make any obviously incorrect connections, like reversed power or a short from power to ground?

No, I dont remember making any incorrect connections. The maestro works with servos 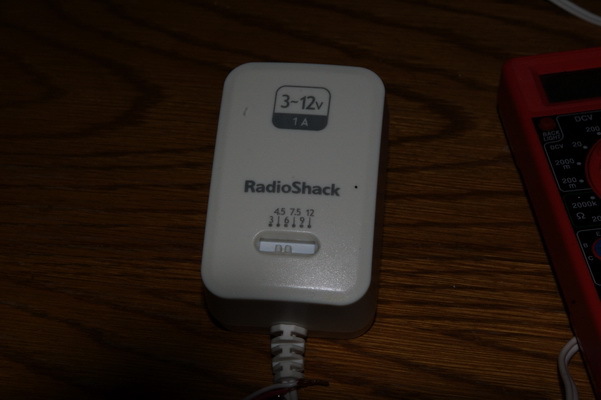 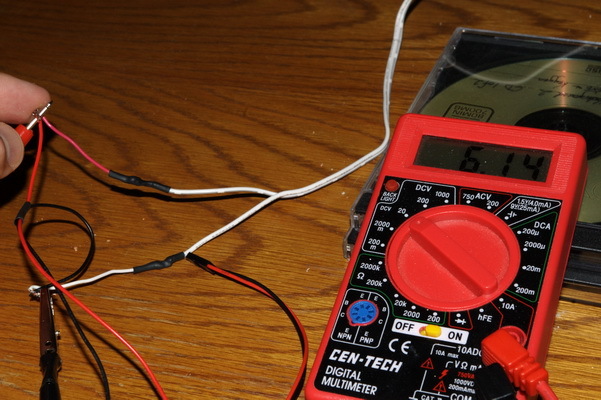 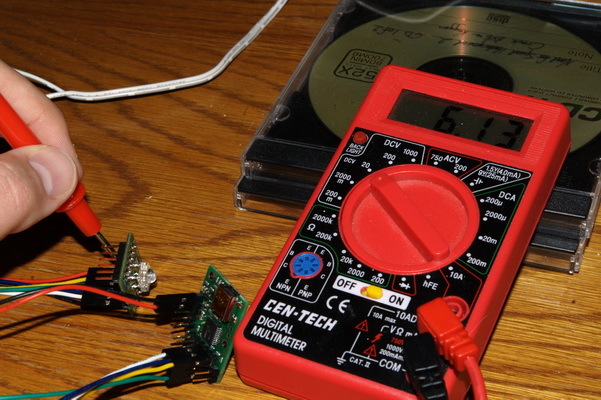 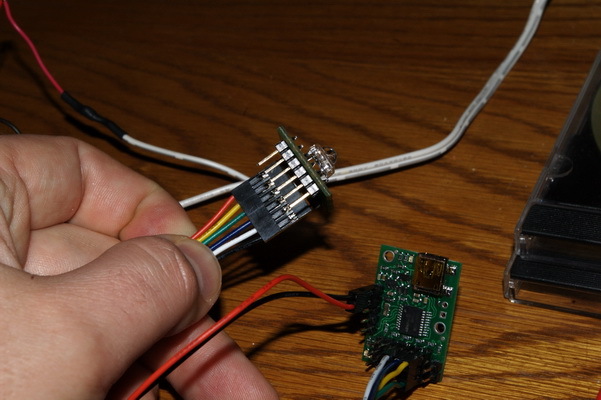 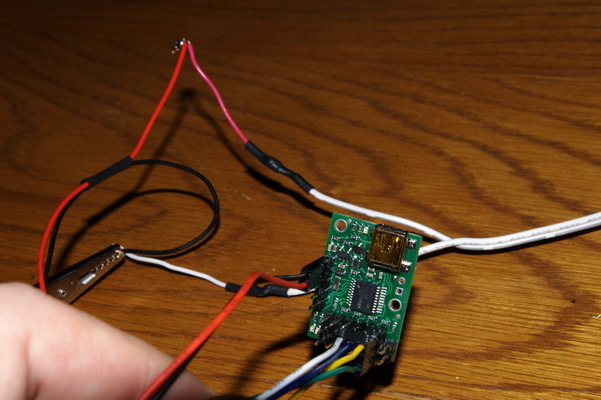 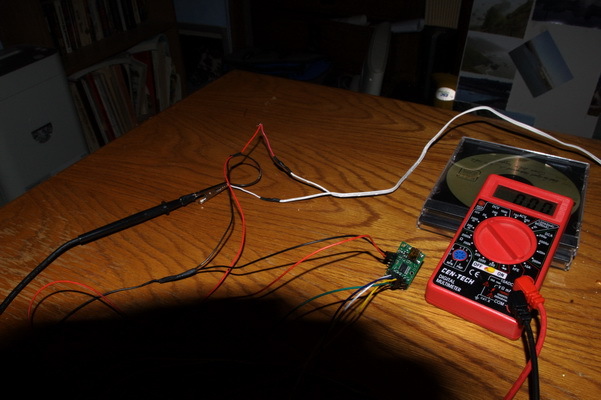 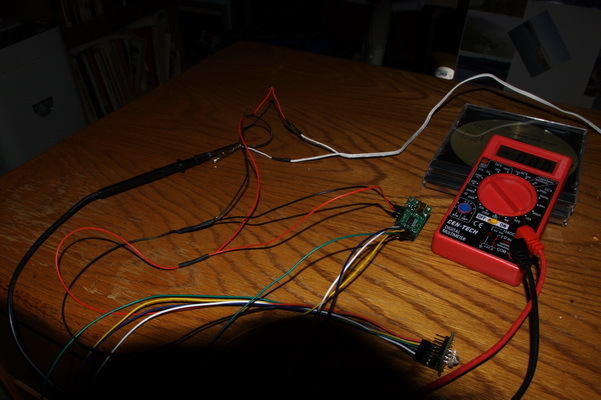 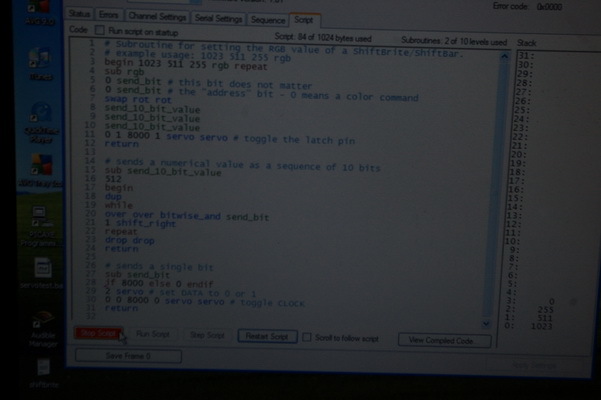 Well, I do not know what to say now. It looks like everything is connected correctly. It would still be good to know whether your Maestro turns on under the 6V power when not connected to USB, but otherwise I would just check every voltage (including 0V, e.g. by measuring with respect to 6V) at the pins on the ShiftBrite. Test that the voltages connected to Maestro outputs toggle correctly when you drag the sliders around. If all the voltages seem okay, and you are still running the configuration you posted earlier without success, then you probably have a damaged ShiftBrite.

We would be happy to take a look at it if you would like to send it back: send an email to paul at pololu.com, and I will get back to you with an RMA number. Though really, for a $5 part, it might not be worth waiting - you could order another one or two and be extra careful with static electricity, connections, and you will probably get it to work.

Dang! I am hearing you, I will check the voltages. I had hoped you would see some bonehead mistake I had made and all would be right with the world. I wonder though if it could be SOMETHING in my script that is stopping it from working. Perhaps you can upload your working code here to the forum and I will copy it straight over and try it.

As I told you, the exact configuration file that you posted worked just fine for me over here. So it is either your connections or something wrong with the ShiftBrite. Hopefully you will find that there is just some wire loose somewhere!

robp790: I noticed in one of your photos that it appears you have the multimeter probe wedged between the V+ pin and the nearest output.

Shorting power directly to a data output pin is usually a bad idea, and if that’s what you’ve been doing all along then I’m afraid your ShiftBrite is now toasted. There’s a slim chance it will still work but not pass data to the next device. However it sounds like nothing you try works, and I have to assume the worst.

Edit: I took a second look at that photo and zoomed in, seems like an optical illusion and the probe is actually on the outside of that pin. However, if you did ever short that connection, it would explain the problem.

I ordered a new shiftbrite. It came in today. Using the modified code. It turns on. I get one color at a time. I sort of thought that example script was out put many changing colors with the stack changing so much.

Great, I am glad it is working for you now! The example script was just a subroutine called “rgb” that sends a color value to the ShiftBrite, and it did not work when you tried to run it by itself, remember? It is up to you to use that function in your own script, and the example I gave you as a starting point was just to send a single color command in a loop like this:

It is really important that you understand what that means if you want to write more complicated programs. Basically, the words “begin” and “end” define an infinite loop. Within that loop, the numbers 1023, 511, and then 255 are placed on the stack, and then the subroutine “rgb” is called. That subroutine does a lot of complicated things to send a message to the ShiftBrite, and in the process it uses up those three values. When rgb returns, the stack is empty, ready for another repeat.

If you want to add more color commands within the loop, you can separate them with millisecond delays like this:

That alone should get you pretty far. If you want to do more complicated things than just simple sequences, of course you will have to learn more programming.

Cool! Thanx for you help and patience!

Does that mean you have it working great now?

Hi,
I’have been going thru the shiftbrite example code and i think I finally got it!
My question is what is the output rate of data this way?
How many bits pr second is the mini maestro able to clock out this way?
How long are the toggle periods?

Does that mean you have color sequences working now?

The script can send out somewhere between 5 and 100 color updates per second, but I have not characterized it beyond that. One simple way to do this would be to write a loop that repeatedly calls RGB and then adds one to a variable sitting on the stack - then you can just watch how quickly the number increases over time. The Maestro is certainly not a high-speed output device, but it should be enough for simple applications.