Robotics and electronics discussion Software and microcontrollers
3ncrypt3D July 24, 2019, 1:30am #1

I am working a Remote Control Giant Scale P-51 Mustang in the Miss America Color Scheme to be completed for a 4th of July 2020 Party, using a Spektrum 12 Channel Remote Control Receiver. After racking my head around working 16-18 channels into a 12 Channel Receiver, I found your products and became extremely excited, bringing back an ancient love interest in electronics and robotics. The Landing Gear and Gear Doors/lights/radiator doors were stressing me out, then Suddenly my project had an (very) EXCITING answer.

Could someone point me in the right direction. What is it that I am missing here? 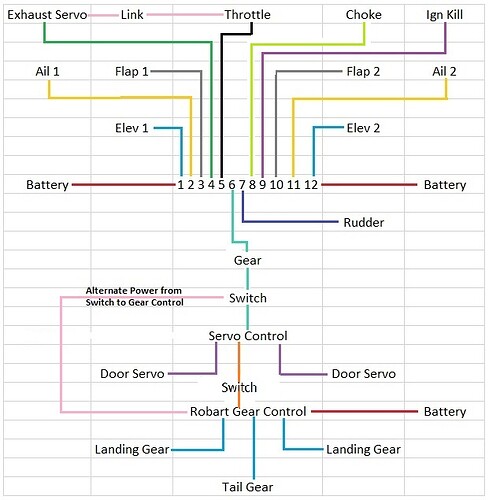 It is not entirely clear to me what you are trying to do, but from your description, it sounds like you might be sending a hobby RC servo signal from your Spektrum transmitter and not a valid TTL serial signal. The Maestro does not accept servo signals as inputs; although, you could use a separate device like our RC switches to convert a servo signal into a digital signal that the can be read from a Maestro channel configured as an input.

If you are sending TTL serial commands, you can find a list of valid commands in the Serial Servo Commands and Serial Script Commands sections of the Maestro user’s guide. Note that there is no script command for reading the TTL serial input, but there are commands that can directly control servo channels and interact with a script. For example, one work around for “reading” a value from the serial port would be to use one of the servo channels as a dummy channel that is controlled by serial commands, then read that channel’s position from your script. Alternatively, you might be able to sue the “Restart Script at Subroutine” or “Restart Script at Subroutine with Parameter” commands to interact with your script in a useful way.

Thanks for the advice Brandon.
You are correct, a rc signal from the Spektrum Transmitter to a rc switch then to the maestro to control the script. I was completely reading into the serial ports wrong. I just hooked the rc switch up to a empty channel and see what I have to do from there. With any luck the script portion will be as straight forward as it seems. I will post this project up as soon as I get it all working. Thanks again.