Hello,
This is the kind of situation where a picture would be worth a thousand words. Can you post one?

You definitely need to connect the grounds of the two controllers together - any single ground connection should suffice, since all of the grounds on either board are all already connected together. It is unlikely that there is a common ground through your power strip. I do not totally understand the rest of your power setup (e.g. where are Maestro “servos 6 and 7”?), but I assume that it is not an issue since the boards are both running, and you can tell they are not working by the LED states alone.

The undocumented blinking LED pattern of the Mini SSC is just another kind of serial error. It would be interesting to know what happens when you send just a 0x80 - can you try that?

Here is the definitive reference on daisy-chaining. Please make sure that 0x80 is the first byte you are ever sending to the serial chain, so that the Micro SSC can learn the baud rate. You can test the Maestro by itself, with no connections to the Micro SSC, by connecting TX to RX and sending some bytes using the serial transmitter, looking for whether the bytes are echoed back. If you have some other source of serial output, you can also test the Micro SSC by itself. It is possible that the USB dual port mode might be easier to use, and it is definitely worth a try if you are still stuck on this.

Thanks for your help, Paul! I’ll take this a step at a time. Here is my Maestro-only setup using a regulated wall-adapter type 5VDC supply (not Pololu’s this time, but it is fine). As you suggested, I used a Pololu jumper between the TX and RX pins so Pololu’s serial transmitter application would echo any byte(s) it transmits: 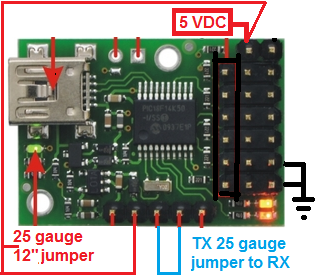 Before transmission I have a green steady LED and a double-flashing yellow LED. I send a single byte, 0xAA. Upon transmission I get a steady red LED and keep the steady green and double-flashing yellow. I do not get any received byte.
I have a second, brand-new Maestro, straight out of the plastic envelope. I used short 25-gauge jumpers and some alligator clips to apply the same 5VDC from the wall adapter’s plug to VIN and GND. I used a 12" 25-gauge jumper between TX and RX. After pulling and reinserting the USB, stopping and restarting the transmitter application and selecting the newly assigned Command COM port, I get a steady green, a flashing yellow on and off equally at about 1 Hz, no red LED, but no echoed message in the transmitter application either. I used the new Maestro and nothing but USB power and the same jumper, in case that is supposed to work. Again, steady green, 1 Hz flashing yellow and no red LED, and no echoed message. If your TX to RX trick works, and of course it should, it isn’t working for me! Weird, is it not? Looking forward to your reply. You’re always very impressive in this forum.

Hello,
The Maestro comes configured for UART mode, so you have to put it into one of the other modes to use its USB-to-serial feature. Can you get it into USB chained mode and try again?

Paul, you were absolutely right. When I broke out the new Maestro, I forgot to reconfigure it from its default, UART detect baud rate. I changed it to USB chained, and got my echoed serial transmission as expected. Great job! I then tried the other Maestro which gave me so many weird results, and got the steady red LED, even after I desoldered shared power. I’ve decided I broke that one somehow. I then attempted to make the Mini-SSC work with the new Maestro, and eventually succeeded! It wasn’t perfectly easy, though; there are a series of steps to be made pretty much in order. This is worth passing on, so I’ll be explicit for others after me to find this, as I wish I could have days ago.
I wired the Maestro and the Mini-SSC (8-servo serial controller) like this: 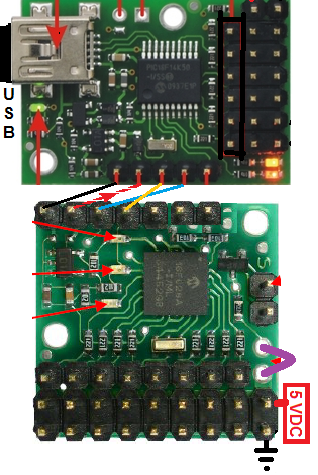 Notice the Mini-SSC shares 5VDC power between the servos and the logic (I used a 1-amp (the bare minimum) wall adapter from Pololu and matching barrel jack soldered to the servo +5 and ground rails). The Vcc=Vs jumper is in place, bypassing the regulator. It also puts the servo power’s +5 volts on the VIN pin. I used a jumper between that pin and the Maestro’s VIN pin to power the Maestro with 5 VDC as well. It worked. Later I took the jumper off to see if the USB would provide enough power to send serial signals to the Mini-SSC, and it did. I wonder if it would for many parallel Mini-SSCs? If not, my jumper from VIN to VIN works . GND is, and must be, common between the Maestro and Mini-SSC(s). TX from the Maestro goes to one or many Mini-SSCs. If there’s ONLY one Mini-SSC, TX from the Mini-SSC may go to RX of the Maestro. When I jumped between my only Mini-SSC’s TX and the Maestro’s RX, I could see my serial transmissions from the PC echoed back in the transmitter application.
I ended up following your recommendation, Paul, and reconfigured the Maestro from USB Chained to USB Dual Port. Everything still passes through the USB and Maestro, but I can just ignore the Maestro and talk to the Mini-SSC on its own port, the TTL Port. I had to look at the Device Manager for the new port numbers; on the earlier Maestro, my computer assigned COM 4 to the Command Port and COM 5 to the TTL Port. On the new Maestro, the Command Port is 8 and the TTL Port is 7. Even the order changed. After changing to Dual Port, I was able to get it all working pretty quickly with the above-pictured wiring. To test my setup, I plugged one servo into channel 0 of the Mini-SSC, and nothing into the Maestro. To avoid seeing that pretty red LED shining bright, I found that a certain sequence of power-up and startup events works best:

So thanks, Paul, you’ve done it again, and I’m up and running! If I ever figure out what killed the first Maestro, I’ll let somebody know. Probably the usual-- cosmic rays, a full moon, and Murphy. And maybe some static electricity…

Hello,
Your description makes sense to me. I am glad that it works for you now!

USB should be able to provide at least 100 mA and probably 500 mA to the Maestro, which would not only be enough to power the Maestro - at 500 mA, it could be the 5V supply for all of the controllers in your chain, if you like, and you could entirely separate the servo supply from the logic supply.

If you want to know why you are getting a red led on the Maestro, you should take a look at the errors tab of the control center. I would be interested to know what you find, since I cannot think of how sending a single 0xAA could possibly cause that. Have you tried resetting the Maestro to its factory settings?

I would be slightly surprised if static electricity killed it. We get a lot of static out here in the winter in Vegas, and while I try to be careful about it, I have received quite a few painful shocks directly through various pins of my Maestros, and I have yet to notice any damage. I am still betting on incorrect configuration or damage from an electrical short.