I’m a newbie. I have a maestro 6 with an r/c continues rotation servo to to move a mine car on my garden railroad in and out of the mine.
when I make a sequence to go in and out, the first time it stops in the wright places, if I run it in a loop after every sequence it stops a little short. after a few times it goes off the end of the track. Help.

Are you rotating your continuous rotation servo for a set amount of time between each stop to try to control it? You might try adding a separate sensor to your servo to try to keep track of its position more accurately. Alternatively, you might consider adding sensors to the your track where you want the mine car to stop. You could then have the maestro use these sensors to stop the mine car each time it triggers a sensor. One way to do this might be to have a reed switch on your mine car and place magnets at your stopping points.

It is hard for me to suggest more than that without more information about your setup. If you want to post some pictures of your project, I might be able to recommend other ways you could try to solve the problem. By the way, your project sounds really neat.

If I have the time the same on move left and move right it stops short coming back to right and stops long on the left every time it runs a sequence it stops even shorter both ways until it runs off the end… If I make the time longer on the right move it does the same thing only in the other direction. I tried different times but it will not do the same movement every time. I hope you understand what I’m trying to do I’m a newbie at this. I attached photos one of the computer screen and the mine car the blue arrows are were it should stop every time but it doesn’t it stops short on the right move and long on the left move. I tried uploading a video I couldn’t make it work.
Nigel 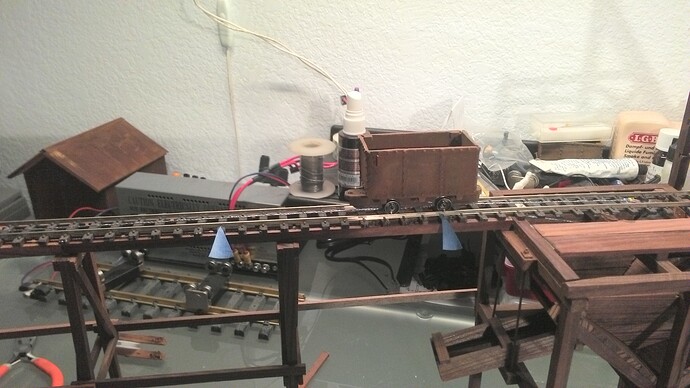 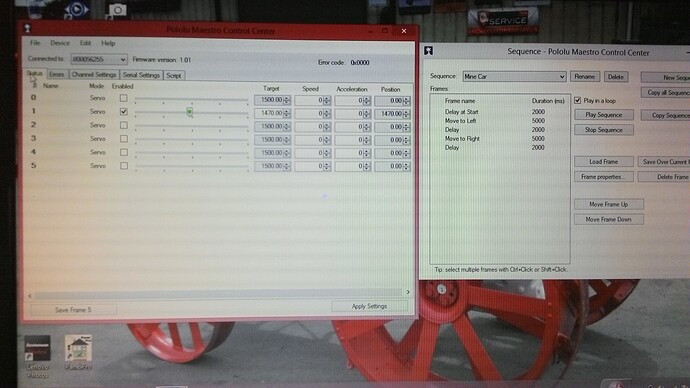 Thank you for posting pictures.

If you are using a continuous rotation servo, you might try adjusting the delays some more. Keep in mind that the servo might not perform completely symmetrically, so one delay might need to be longer than the other.

It looks like you do not need the mine car to travel very far; you might consider looking into using a multi-turn servo, which will let the Maestro control the position instead of just time intervals. However, I do not have any good recommendations for where you might look for one. You might try doing an Internet search for “sail winch servos”.

Thanks for the info. The more I look at it I think the speed is different from left to right.
Witch would make the distance different. How do I make the speed the same both directions.
I tried to change the speed on the statues screen but it didn’t make a difference.

It might also be caused by uneven loads in the different directions. For example, your system could require more torque to pull right than left, which could lead to a noticeable difference in speed. Depending on your servo, you might be able to adjust your target position to help correct this.

For a continuous rotation servo, the speed setting in the Maestro Control Center will adjust how fast the servo reaches the speed set by the target position (i.e. the acceleration).