Maestro 6 will not control any servo

I have a 6 channel Maestro Micro I purchased with 2 HiTek servos HS-485HB and HS-625MG. To test the Maestro Micro I have used one or more of the servos in a number of ports with the same problem.

I have connected the VIN and BAT+ pins with a soldered jumper. I am using a 6-Volt Duracell lantern battery to provide power for test.

From the materials available online, I first connect the servos. I have tried 1 but usually both, in all channels. After that I connect 6V battery leads. At this point the yellow light starts flashing because there is no communication. I connect the USB cord to the computer and then the green light turns solid.

The connection to the Controller program on Windows 10 seems to be working because when I switch the channels to Input, it seems to be reading from the pins. When I switch to Servo mode for an attached channel, the settings can’t be changing indicating some sort of communication or detection.

However in the manual tab, I cannot move. The green dot moves after I move the blue arrow with no movement or recorded error.

I am sorry you are having trouble controlling your servos. Can you verify that both of your servos are working normally (e.g. with a standard hobby RC transmitter and receiver)? Can you also post pictures that clearly show how you have everything connected? 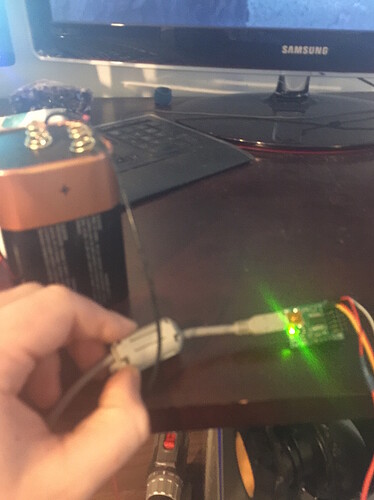 Don’t have any hobby RC transmitter/receiver… this is my first foray into servos. I’d be really surprised if they were both defective. When I switch the channels to input, I see very low values (since nothing is connected to the pins), which makes me think it’s a software issue and not hardware.

The thing that irks be is the lack of error handling. Shouldn’t the software fault if the servos aren’t moving? Why is the green dot moving when the servo isn’t?

Standard hobby servos do not make their feedback available. The signal pin is an input; nothing is intentionally produced on it to be read. So, there is no way devices like the Maestro can determine the state of a servo (e.g. moving or not moving). Accordingly, it makes sense that you are not measuring anything interesting when you try to read your servos’ signal pins as inputs on the Maestro. The green/blue dot in the Maestro Control Center moves because it is reporting the current Target position the Maestro is sending out on a given channel (if that channel is designated as “Servo”).

Your picture does not make it easy to see your connections. For example, it looks like only a single terminal of your lantern battery is being connected to, and it is not easy to trace which colored wire is going into which pin on the Maestro. Can you post content that is more in-focus that clearly shows your connections? If it helps, you can post multiple pictures that include a close-up of the pins being connected to the Maestro. Also, if you have a multimeter, can you measure the actual voltage your lantern battery is producing?

The reason I mentioned the input from the pin when I switched the channel to input was this suggested the microcontroller was connected to the control pin. The focus is being messed up by the bright LED’s. I will try again without hooking up the the USB. The battery is putting out 5.7 volts.

My thinking now is that the pulse rate is set too low on the channel. It defaults to 200 Hz when it needs to be 50 Hz for my servos. I wasn’t able to directly change some of the settings so I was thinking they were somehow being autodetected, but upon in depth reading of the manual I see it should be defaulting to 50 Hz. I will report back.

UPDATE: Switched the frequency to 50 Hz, still nothing. I am going to Hiteks website to see if I can get some better specs on the pulse rate.

I am sure these are the correct specs from the Hitek website. The servo is holding but not moving. Not sure what to do at this point.

EDIT: I notice in the picture the Rate is back to 200. I noticed you need to enable all 6 servos to get the rate to go down to 50 Hz. I did that and still there is no change in behavior. 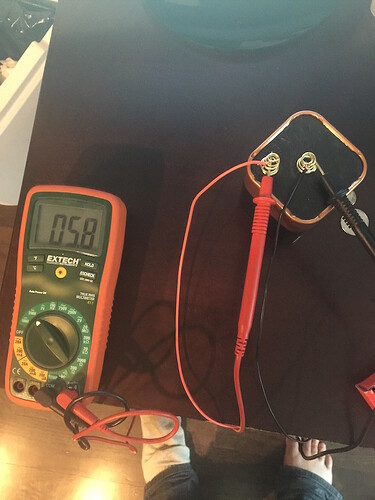 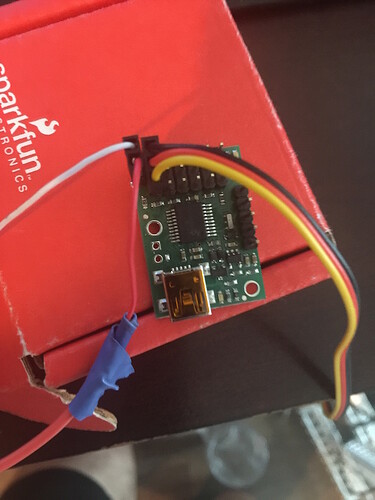 As I mentioned before, the servo is holding position (I don’t know if this indicates power but no signal) but not moving. I’m not sure if both those servos are defective. I am receiving another one today. I will update with results of my Arduino test.

Your connections seem fine, especially if the servo resists changing its position, since that would mean it is being powered appropriately. You might try resetting the Maestro, clicking on the “Status” tab, checking the “Enabled” check box for the channel your servo is connected to (channel #0 according to your picture), and then clicking and dragging the slider. You can reset the Maestro by clicking “Device” > “Reset to default settings…”. The default settings include setting each channel’s mode to “Servo” with a pulse rate of 50Hz.

If that does not work, can you upload a video that shows your system and screen when you perform that test? It would also be useful to verify that those servos are working nominally. So, I would be interested to know the results of a test that tries to get those servos to work with an Arduino and something like the Arduino Servo library.

This is resolved, my HS-625MG was defective out of the box apparently. My HS-485HB didn’t have enough torque to move the mechanism it was integrated into. So I was mostly testing the HS-625MG so I wouldn’t have to disassemble. Strangely enough, the HS-485HB and the HS-625MG had the same symptoms… they would hold but not move.

Probably going to use my Arduino controller for my project but I’m keeping the Mini Maestro around to test EVERY SINGLE servo out of the box before I get it deep in the middle of something.

Thanks for your support.