hi, im working on a fedora/olpc laptop (the green toy everyone loves/hates)
i followed the readme and got sudo mono ./MaestroContorCenter working
but i get following error popup on startup:
"There was an error while starting up libusb-1.0"
yum install libusb
didnt help, i also tried installing from source. any pointers?

Without these details, I can only guess about your problem, but I can tell you that you need the libusb-1.0 package installed, not libusb-0.1. It looks like under Fedora this might be called libusb1. Can you try installing that?

installing all the libusb1 packages got it working
sudo yum install libusb1*
i suspect the correct one was libusb1-static, but my linux is to shallow to find out for sure…

btw. i previously installed from source the latest package from the libusb.org sf repository (libusb-1.0.8)

i have another small problem, the servo control rows are overlapping.
changing the resolution on this thing is beyond me 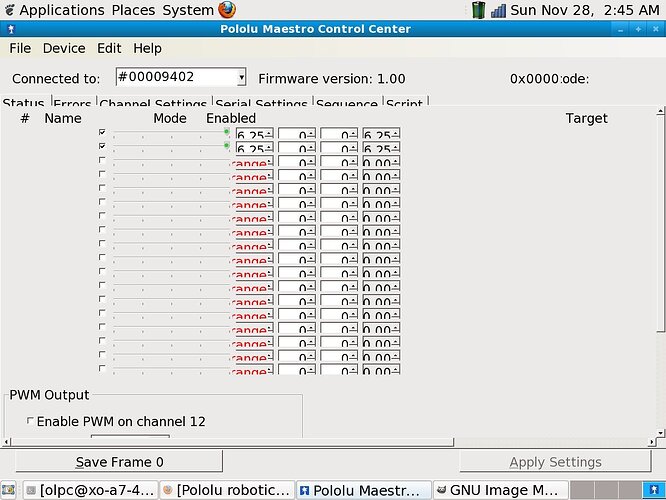 Hello. I’m sorry that we forgot to write back earlier.

The font on your OLPC appears to be appears to be a lot bigger than the font size on typical computers. Is that the standard font size on an OLPC? It looks like some parts of the Maestro Control Center are scaling correctly with the font size, and others aren’t. I’m trying to figure out how to fix the application. In the mean time, you could try decreasing your system font size and see if that works for you.

The device is detected.

NB : I also have installed libusb1 from the source on the libusb website. (libusb 1.0.0) before installing the packages on yum. I don’t think it is necessary though.