Why are you not selling high discharge Li-Po batteries?

Li-Po batteries have made NiMH batteries obsolete in the RC hobby because they are:

They even are not as harmful for the enviroment as the NiMH ones !

Its only disadvantage is that they can cach fire if you are not carefully when charging.

I use Li-Po batteries in my RC heli, and in my robotics projects. I have to buy them from China. It would be nice you offer them here.

Thanks for your thoughts. The charging difficulty and concerns about over-discharging are part of the reason we’re not selling Li-Po batteries. For products that we make, such as the 3pi robot, we like the standard (e.g AAA) package with battery holders so that our customers are not stuck getting some very specific battery just from us. Another reason we haven’t really considered carrying Li-Po batteries is that they seemed easy to get at regular hobby shops, which would make it difficult for us to compete. Are you getting them straight from China because of better prices, or are the ones you want not readily available here?

I buying from China mainly because better prices, for example:

Because its high discharge capacity, you can run any small robot from this single cell, if we need a higher voltage, we can use a step up power supply (as the one you carry) or simply we put in series two cells.

A similar battery it costs around $9 here.

You can check it out here:

I’m not sure what the shipping costs and times are, but the $2.72 at the source you mentioned is the kind of price that makes me think it will be hard to compete on these kinds of products. In light of your comments, however, I will pay more attention to the various solicitations we get from Chinese battery manufacturers.

Just to add a point to this post. Personally, I love Li-Po batteries and use them very often, but I agree with Jan. They are not the type of batteries you should be giving to novices or people who don’t understand the danger associated with charging them. Also, if you discharge them too far, they are desined for the bin. I know there are a lot of people who know all the required info to use Li-Po’s safely, but if you have that level of understanding and experience, then you should be able to source them elsewhere and modify your project to use them.
I also find it extremely hard to believe any reseller in the US could compete with the company you linked to. Hobby King work very closely with their supplier of Li-Po batteries, and they are the only retail seller of hobby Li-Po’s made by them as far as I’m aware. Also, they tend to suck the supply dry very quickly. Shipments of hundreds of a single type of battery often sell out within days.

The performance of Li-Po batteries are far greater than NiMH, but you’ve really got to know how to use them, and you have to make the initial outlay to get a good quality charger and balancer. I suspect that a lot of Pololu customers may benifit more from a battery that they can leave switched on without worry, can charge by plugging a simple power supply pack into the wall, and really just don’t have to worry about. But for people that really want more performance and lighter batteries, maybe it’s a good thing that they have to search for them and find more information before they have the potential to do damage with them…

You could sell this kind of batteries: seeedstudio.com/depot/lithiu … th=104_107

The battery includes a protection circuit against overvoltage, overcurrent, and minimum voltage.

I use this battery with the dc-dc that you sell to build small robots. 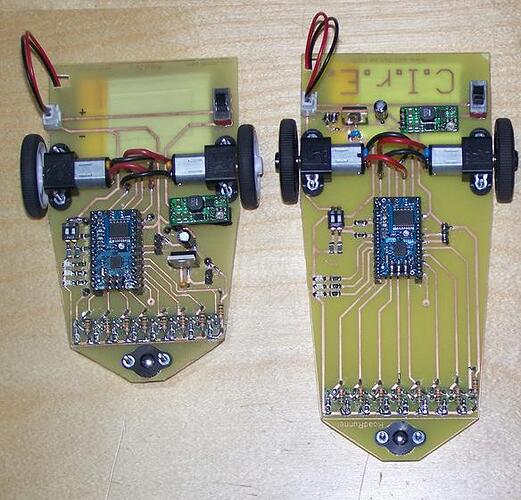