I asked a student to put fresh batteries in to my 3pi and now the LCD display won’t, well, display. I’ve done the whole LCD contrast pot ‘thing’ so I know it’s not that.

I’ve tried the display in someone else’s 3pi - no joy.

I’ve tried their display in my 3pi - no joy.

A common issue that can damage the LCD on the 3pi is to install it backwards. You can see how the LCD should look in the following picture. 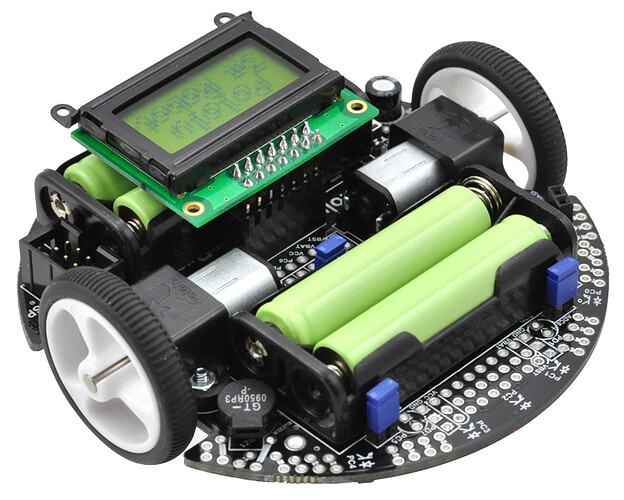 Can you check to see if the LCD might have been installed incorrectly?

Please note that if you installed the LCD from the other 3pi Robot backwards, it is probably damaged too.

I haven’t seen it the wrong way round as I left them to change the batteries themselves - anything could have happened.

What damage could occur? Looking at the schematic I’m not sure what could be fused/overloaded/reversed???

It never occurred to me that there could be a wrong way round otherwise I’d have supervised them! I can see that the plug & socket aren’t keyed so I guess I’m not the first to fall victim to this situation.

The other display worked in its original unit after I tried it (the right way round) in mine - so that’s not damaged.

I can still do motor stuff but calibrating line following is tricky and of course I can’t see the battery voltage reading now - which I am aware I need to be careful not to let drop lest it never wake after a programming attempt.

Is this fixable at all?

If the LCD is all that is damaged, then you can replace it with this LCD and header. To be sure the problem only involves the LCD and not some further damage to the 3pi, can you try testing the 3pi again with a working LCD, being careful to keep the correct LCD orientation? Since you have previously attempted to adjust the LCD contrast potentiometer, you might need to do so again if it is not displaying with the working LCD.

After a more scientific testing session - as in peace & quiet and a clear desk - I’ve established that it’s only the LCD module that is kaput. As I’ve a pile of them from other projects, I’ve transferred the header pins over and we are back up and running again.

As a minimum, I’d suggest it would be appropriate to add a warning to the box / documentation in line with the warning about programming with drained batteries.

Preferably, key the pins so that it’s not physically possible to put in the wrong way round.

Thank you for your feedback. We do have warnings about the LCD placement in the "Important Safety Warning and Handling Precautions section of the “Pololu 3pi Robot User’s Guide” which we think is an appropriate place for them, but we will keep all of your suggestions in mind.