I currently have 3 Jrk motor controllers running on 24v and controlled by RC through a Futaba receiver. One jrk was connected to the receiver will all 3 wires to supply power to the reciever. The other two only had their RC signal and ground wires. Everything worked great. I then added in a RoboClaw Solo 60, that was also wired to the reciever through a ground and signal wire only. The problem is if the RoboClaw is running at all, the other 3 jrks start flashing their red leds and say they lose input signal, and also start twitching. Even when the roboclaw is commanded to move so slowly that the motor isn’t moving yet at all, the problem starts. If the rc signal goes to zero and the roboclaw is at rest, the other 3 are fine. I thought maybe it could be a ground loop issue since all the motor controllers have their power and signal grounds tied together, and by grounding all of them to the reciever I made a loop. But if I take a ground off any motor controller to the reciever, it barely gets any signal at all. Just an occasional little movement. I also checked an rc signal midway through the cable with a scope and it looks fuzzy, but only approx 1 volt of noise.
Any idea whats going on?

1V of noise is pretty significant since the signals are only 5V. There are several things you could try to limit electrical noise.

If you try those things and it doesn’t improve, can you post more details about your setup, including information about the motors and power supplies you are using as well as how everything is connected? Additionally, can you post pictures that show all of your connections, as well as scope captures of the noisy RC signals? 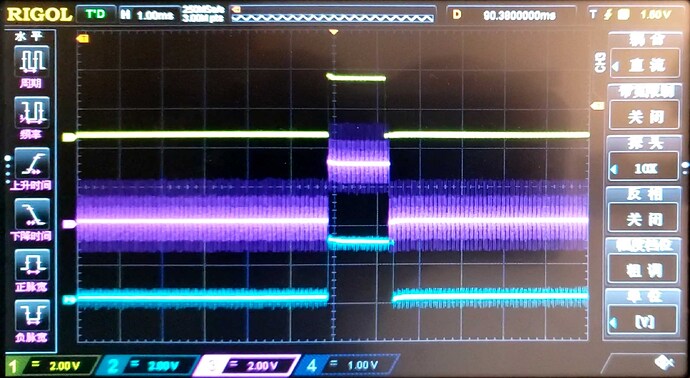 This is what they look like with the roboclaw running. Obviously the pink one is WAY too noisy, I didn’t check that one before. The blue one is noisy enough that the motor on that one “ticks” approx every second. Just a super tiny jerk that sounds like a click. This is just straight unshielded wire. The odd thing is the pink trace is the longest wire, a good 2 feet, but its also furthest from the roboclaw. I’m going to try making shielded servo wires, but is there anything else for noise? I tried a quick 0.1uf ceramic cap between the servo signal wire and ground which killed the noise, but then the motor had jerky movement.

Some details about the setup:
Very large Johnny 5 full size robot. Temporary battery setup with two 12v 20ah SLA batteries in serial. Motors are from banebot, two 775 motors in parallel in to a planetary gearbox. So one driver runs the dual motors as a single unit. 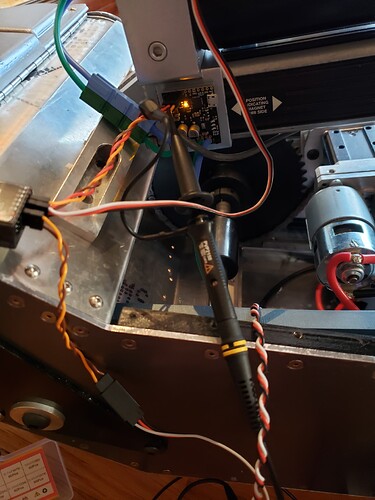 One jrk is shown here on the lower actuator (yellow on the scope), the one that powers the receiver. You can see a bit of the banebot motor there. The roboclaw (blue on the scope) is down in the tray below the motor. There is another jrk (pink on the scope) on an actuator about 2 feet above all that. Its the red/white/black wire going up. 10 gauge wire from the batteries in to a 120amp switch, then split to the 3 motor controllers currently being tested.
Nothing else currently connected on the robot.

Well then, it’s not really the servo cables that are the root of my problem. Just overall lots of noise when a motor controller is running. I’m getting 8volts peak to peak of solid noise even on the battery terminals themselves when running the roboclaw. Around 6v noise with a lower powered jrk on the actuator in the last picture. 20ah SLA batteries, sort of abused with some amp flow motors before this.
Is that kind of noise at the batteries normal??
I even stuck a little piece of wound up wire on the end of a scope probe and moved it around to get a sense of where the noise is being picked up. In the front of the robot where the main wiring is, I get again 8 volts of noise picked up, even though I’m still 3" from the wiring (due to robot thickness). Motors off, all noise is practically zero. 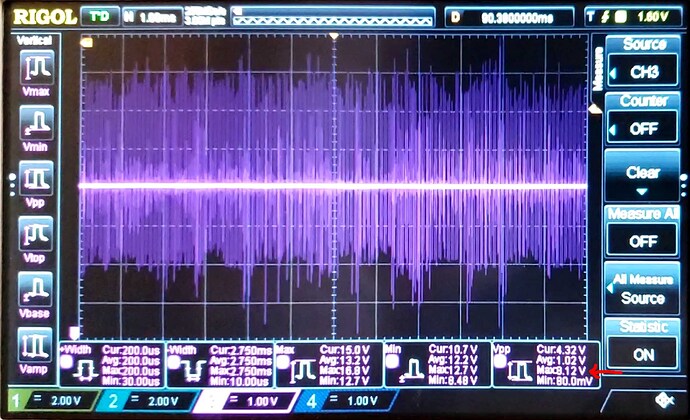 High power motors (especially brushed DC motors) can cause a lot of noise, and there is no special circuitry on the Jrk or RoboClaw controllers to prevent noise and back EMF from reaching your battery (which is sometimes used as “regenerative braking”, and is discussed a bit in this thread). So, it is not surprising to see noise on the VIN line. The tips in this app note about “Dealing with Motor Noise” might be helpful.

You might also be able to reduce the amount of noise generated by adjusting how you are running the motors, for example, using some acceleration/deceleration limiting.

The problem is the older silver cased RoboClaw Solo 60 v2. It is over twice as noisy as their newer versions. The 2x60 driver v7 board works great. Much less noise and no issues now. I had two old Solo 60’s that were both the same.