I’m trying to synchronizes the elevation mechanism in my large scale (8’) model battleship. The system uses continuous rotation FS90R servos running through a gearbox, but I am having a problem with the speed of the servos; I cannot find three that run at the same speed, so after a minute or two, the guns no longer elevate together. I was hoping to use one of the Maestro series servo controllers to be able to receive an input from a single analog radio channel and output it to three servos, using the software to adjust the servo speed separately and synchronize them that way .

Am I on a completely wrong track here, or is there a way to accomplish that?

I’m open to other suggestions too as long as they start with a servo signal from my radio. Thanks in advance for any help!

It is common for continuous rotation servos to not spin at the same speed when given the same input signal, but you might be able to get them a little closer to the same speed by adjusting the middle-point potentiometer if you have not done so already. If that is not enough, adding a separate device to process the input signal and send separate signals to each servo like your described seems like a good plan.

Unfortunately, the Maestro cannot accept an RC signal as an input directly. Depending on how you want your system to work, you might be able use something like an RC switch with digital output with a Maestro. The RC switch can be configured to toggle the digital output once the RC signal has reached a threshold, so you can essentially use it like a button and have the Maestro react and control your servos when it is triggered (e.g. from a switch on your transmitter). Alternatively, you could use a separate microcontroller like an Arduino or one of our Arduino-compatible A-Star controllers to process the signal and control the servos accordingly.

By the way, it might be difficult to get all of the servos to stop at the same height if you are just using timing; if your application requires this, you might consider using some limit switches to get them to stop in some particular locations each time.

Thank you, that’s food for thought. I might have to go the Ardunio route if I want to continue using servos. My next experiment is to switch over to plain gear motors and use an ESC to drive them. I built a simple gear train that connects from the servo (or soon, motor) to the the guns via a lever mounted on the final gear, like the drive of an old steam locomotive. That way I don’t have to worry about setting limits; once the gear passes a certain point the lever travels down. Anyway, I appreciate your time in replying. thanks again! 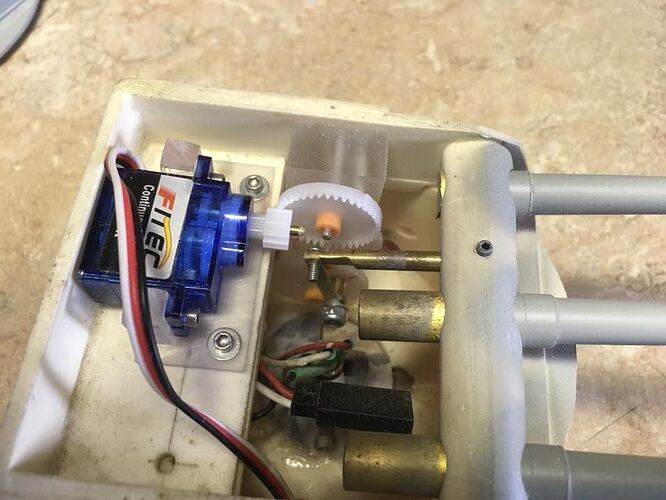