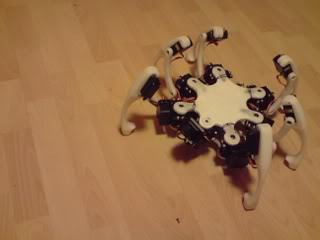 This started as a final year project at Uni to create a control
algorithm for a 3DOF Hexapod, which included Forward kinematics
(6DOF or body orientation, 3DOF for locomotion) and Inverse
kinematics (determine each legs orientation). Since finishing the
project I have been writing an App for the iPhone or iPod Touch
capable of not only being the controller interface for the user but
also able to run the control algorithm. To my knowledge making it
the first robot to use an iPhone as its brain. Here is the first video

Before I had the iPhone App working the control algorithm ran on
my laptop, which made it possible to use a PlayStation Sixaxis
controller

And Briefly it became a Quadruped…

Wow, that’s impressive. Is the wireless link done through bluetooth? What kind of receiver do you have on the robot?

What servo controller are you using?

How did you make the custom mechanical pieces?

Really nice! I especially like the way the quadruped walks without losing its balance. It would be great to see your complete parts list and more detailed pictures if you have them.

Thanks for the complements

Is the wireless link done through bluetooth? What kind of receiver do you have on the robot?

The wireless link has been the hardest part to get working, due to iPhone not supporting serial bluetooth communication without paying lots of money, the App emitts its commands over Wifi. I have been trying to use a WiFly GSX (sparkfun.com/commerce/produc … ts_id=9333) in Ad-Hoc mode to create a Wifi network for the iPhone to connect too. But until the wifi is working I am using a laptop to turn the Wifi to bluetooth. Which means currently there is a BlueSMiRF bluetooth modem aboard the hexapod.

It would be great to see your complete parts list and more detailed pictures if you have them.

I have a few Images of the Quad, 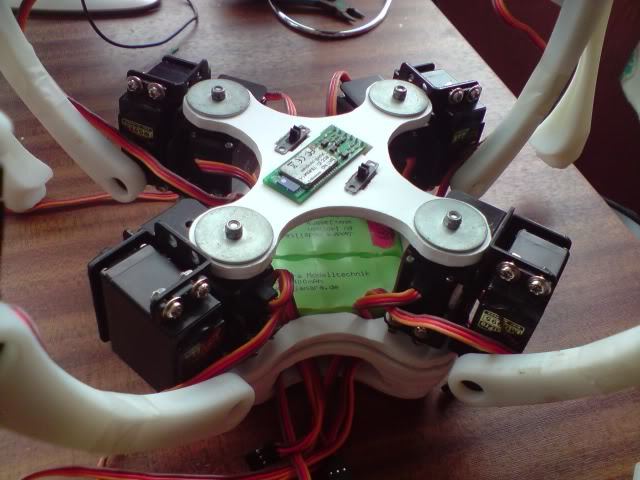 The Servo controller is mounted below the batteries in the caverty in the base. 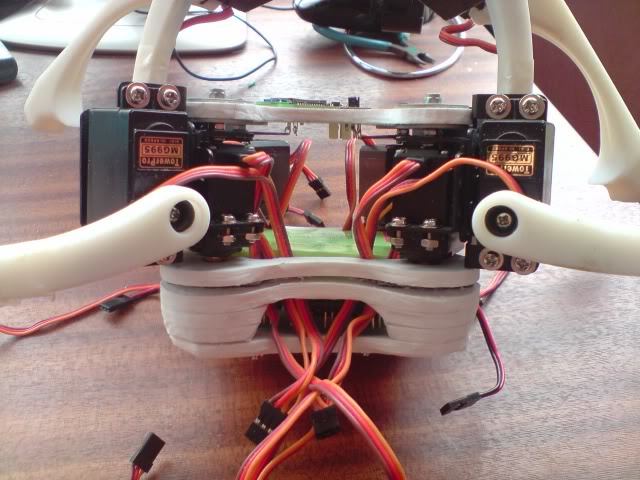 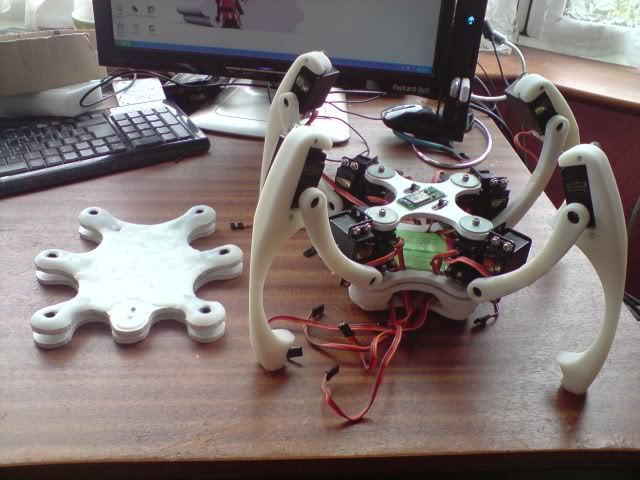 What a nice piece of work.
It’s fairly big. Did you use any software to model it an make a blueprints ?

It would be nice to see it moving =)

What 'bout modeling software ? Any suggestions ?

I have just finished writing a couple of Android apps that allow computer-less
control of the hexapod. Either Controlled directly over bluetooth from an Android
device or by using the Android device to convert the iPhones Wifi signal to bluetooth.

Did you use any software to model it an make a blueprints ?

The legs were designed using AutoCad and were then rapid prototyped for me at my University.

I like how the legs are kind of shaped toward the feet. Gives the robot a certain biological fluid feel.