How to tell if 23201a has built-in power capacitor

I recently bought 3 of these, in ‘partial kit’ form, from my local distributor.
I’m concerned that these may be older stock, and thus lacking the built-in power capacitor (introduced Dec 2011), to protect against LC spikes.
They’re going on projects with Dual VNH5019 boards, driving 24V motors on pwm up to 9 amps, and I’ve been seeing some electrical noise issues on my prototype, so I’d prefer to be proactive now rather than sorry later.

How can I tell if the capacitor is present ?

If its not, what type and value of capacitor should I add, to give adequate protection ?

The new revision of the 23201a board has an 0805-sized, 10 uF capacitor in series with a 1 ohm resistor, which I have highlighted in the attached picture. The original board did not have these two components (so it only had 6 components above the main chip, not 8). 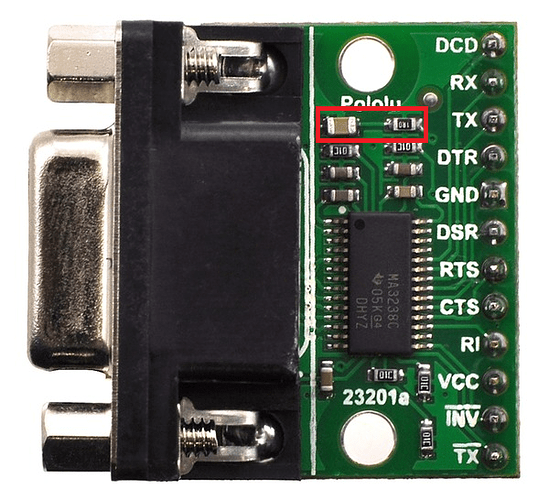 it seems I’ve got 3 of the old boards

I don’t have any SMT components, and even if I did, ‘something similar’ looks difficult on a finished, old revision board. Certainly not a wise move for a SMT ‘virgin’.

Can you suggest suitable voltage and capacitance ratings for the electrolytic option ?

Anything over 10 uF should be fine for an electrolytic capacitor.

I didn’t end up using these as planned last year, but they’re on my desk now, so I thought best to solder the caps on before I need them. But then I realised I’m not 100% sure; where should the caps go ? Between Vcc and GND ?

Yes, you want them across VCC and ground near the board to prevent voltage spikes on VCC. Make sure the polarity is correct!

Thanks for the prompt clarification.