Servo arms fall and crash towards the centre of our planet when power is shut off. They also hum and vibrate when they are holding loads. This wouldn’t need to happen if they had a brake that was applied whenever the servo stopped mechanically moving.

What brakes, spring tensioners etc is everyone using to prevent this stupid problem that servo manufacturers seem not to have noticed (even though its completely obvious)?

Please see this attached image of a dentist light, which does not crash to the ground when repositioned. It doesnt matter if its mounted from a wall or a ceiling or the floor. It doesnt simply resist gravity, it resists slipping in all directions, as would be expected from any competent mechanical design: 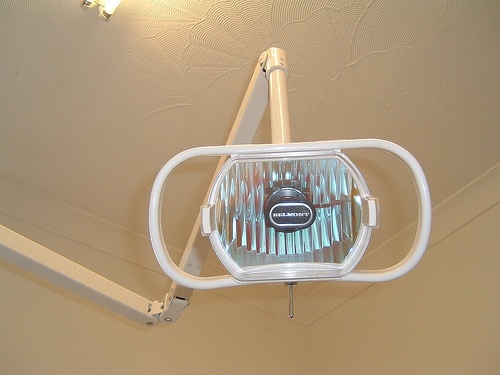 I assume that there are tensioning springs pulling on the pivot screws of each joint. In the case of robot arms using servo motors, what is the equivalent? Any intelligent person getting into robotics for the first time would assume that servos have tensioners built in, or at least sold with tensioners in a bundle by default. To not include them is like selling a car without brakes.

We applaud your trying to think about how an intelligent person might approach things, but your mix of aggrieved whining and arrogance would not be attractive even if you were right, which you are not. Balanced-arm lamps are certainly a reasonable source of inspiration, and if you look into them, you will see significant system-level design beyond what is achievable at just a joint in isolation.

Motors with brakes exist, but using them would likely add substantial control complexity. For instance, if a servo is straining against a load, when do you decide to give up with the motor and just engage the brake? Small movements under varying loads would also be difficult since you would have to coordinate releasing the brake and engaging the motor in a way that doesn’t cause excessive movements during the transitions. Certainly this is beyond the scope of what is practical with RC hobby servos and their standard interface.

For others reading this post: one of the concerns from the support staff when I proposed this response was that the harsh tone would discourage timid beginners from asking questions. This rebuke is specifically for those who, like Zxen, think that a good way to get free expert advice from strangers is to barge into an unfamiliar field and call everyone incompetent and make all sorts of demands. We welcome questions from beginners who are respectful and make an effort to help themselves. For instance, if the original question had been something like, “why don’t servos have brakes built in?”, we might have pointed to my introduction to servos, which covers why RC hobby servos do not have various features robot builders would like.

Free expert advice from strangers? I’ve given your company thousands of dollars.

Do you know this is the only servo brake link on the entire internet?

Its catastrophic that this is what people find when they get here.

There needs to be an off-brake installed. This is likely a pull solenoid that is activated via a Y splitter from the microcontroller to both the servo and the solenoid. The solenoid needs to simply switch off 100% when there are any pulses, probably through an RC Switch similar to this one:https://www.pololu.com/product/2803, and then switch on 100% when there are no pulses. Unfortunately, this product is extremely difficult to use and probably wouldn’t do the job correctly anyway. I have tried other RC switches, but they usually activate only when there is clockwise direction more than 50% arc for some crazy reason. This industry has so few useful products for robot construction its infuriating, and the guy I’m responding to has the same ‘don’t complain’ attitude that I see everywhere. Complainers change the world for the better. I hope someone will suggest a decent RC switch, now that I’ve 99% solved the problem on my own as a beginner.

Servo arms fall and crash towards the centre of our planet when power is shut off. They also hum and vibrate when they are holding loads. This wouldn’t need to happen if they had a brake that was applied whenever the servo stopped mechanically moving.
[/quote]

A hobby servo is used to operate the controls of a toy.
That’s what servo makers intend them to be used for and they are designed to do that task only.
You are using a hobby servo for a task it was never intended to do.
Doing so the onus is on you to find out how a servo can be used for the purpose you want to use iy that is not the purpose it was designed for.

That means you need to design the geometry of your machinery and or gearing of the servo to ensure your machinery never places a load on the servo that is any more than it is designed to hold during its operation.
Servos are sold with the operating limits provided so clearly you failed to use those values to make the summary calculations and determine if the rated load value was adequate for the load your machinery would exert on the servos.

And add the braking device you failed to include in its design to account for the fact servos were never designed to hold any load when not energised as it is not needed for the purpose they are intended to be used by the makers of them.

The alternatives to you researching how to do that yourself is to either pay someone else to do it for you.
Or if you don’t wish to spend any money or time to resolve it fully you could get a stick free from a nearby tree and use it to prop up the lamp when there is no power to the servo.
Cheap but effective.