This is so basic it’s going to be embarrassing but I bought all these parts to learn something new so I have to ask.
I’m building the Hexapod Walker project and I suspect I may have fried the sensors right out of the box. I hooked up the sensor wire from the Sharp GP2Y0D810Z0F Digital Distance Sensor 10 cm to the servo power pin instead of the signal pin on the Micro Maestro USB 6-channel servo controller. Dumb. The sensor red lights are on all the time but no sensing and I have channels 3-5 set for input in the Maestro Control Center. At the same time I bought the parts for the Walker I also bought a Sharp GP2D120XJ00F Analog Distance Sensor 4-30cm to play with so I connected it up up CORRECTLY this time and the lights don’t come on at all even with 4.87 USB volts at the pins on the back of the sensor. That makes no sense either unless an analog sensor won’t work on an analog Maestro. Am I missing a setting somewhere? The servo side of the Maestro works as it should. In my research, I read in the Maestro User manual (4.a. Status and Real-time Control) that channels 1-11 are analog and 12-23 are digital. The Sharp sensors in the material list for the Hexapod Walker are digital and the Micro Maestro in the list is a 6-channel which should have analog input?? I’ve attached a picture of how the Analog Distance Sensor is wired in. So the question is did I fry the Maestro as well as the Digital sensors? Pretty discouraging for a first timer. Granted, it is mostly self inflicted but still… I should have bought extras. 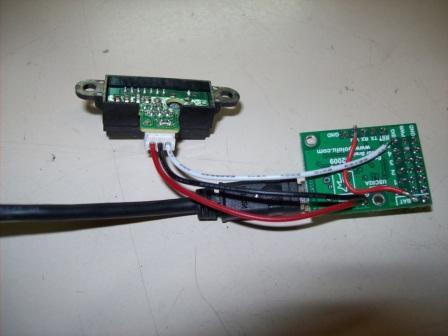 You might have broken your digital sensor, but the analog distance sensors do not have any visible LEDs, so from what you have said, there is no reason to think they are broken. What do you see in the control center? You should be able to measure the voltage on the sensor’s signal line and compare it to the value displayed in the control center.

If you want to test your digital distance sensors more thoroughly, power them at 5V and with the signal line not connected to anything, and let us know what happens.

Oh, I forgot to mention that the current consumption of the analog distance sensor is higher than our rating of the Maestro’s 5V output. It should work when powered by USB, but the regulator might not be sufficient to power it when running from an battery.

Paul:
Thanks for all the info on this problem. This forum, and the way Palolu responds to people of all skill levels are what influenced my decision to buy here. I love the instruction and diagrams. Well, the stars were aligned correctly this time when I assembled the Hexapod Walker. I tested the sensors individually and they all worked as they should. The analog sensor had varying output voltage when connected to a 5 vdc PLC power supply and the LED on the back of the digital sensors blinked off and on as the circuits opened and closed. The lenses on the front of the digital sensors did not light up at all, that was not supposed to happen I take it. I re-assembled the walker and it works as advertised and I don’t have a clue what was wrong. Maybe I had the sensor input wires switched. I know I was looking for the non-existent lights on the analog sensor. This is going to bug me until I figure it out. I’m going to get a couple of extra digital sensors and try wiring one backwards and see if I get the bright lights in the front. I can use them on the 6x6 Wild Thumper I bought too. Good lesson here though. Take your time and be methodical.
Thanks again for your help.

I am glad that it is working for you now! Now, I am not sure what “bright lights in the front” you are trying to see, but on the analog sensors you can actually slightly see the light emitted in normal operation. It is near-IR, so it looks quite dim, and the beam is very narrow, so you have to look straight into it to see anything, but it is visible. I do not remember whether the digital sensor emitters are at all visible. Alternatively, both of these should show up quite well on a cell phone or other cheap camera, which is typically sensitive to IR.