my project is not a robot, but a model machine I want to build for my companies exhibition next year. I nearly finished the design, but now need a way to control the machine’s motion. So I came across Pololu and was wondering if this would be the right choice. I read through the manuals and some forum posts, but my question seems to be to general.
Here’s what I need:
I need several servos to move different axis on the machine, therefore I need to input a position and the servo should move there (so far so good). As I understood normal RC servos have a specific range of movement (angle) and move back to a zero position as known from RC cars. But there are servos which are modified and can turn 360 degrees, but then don’t give position info back. Is that true so far?
So how accurate is that movement? If I use it for my machine and one cycle is 360 degrees, meaning after one cycle all servos should be at the zero position again. So I move servo one 180 degrees, delay and then move another 180 degrees, am I at the zero point again? What happens if I move the servo several times forwards and backwards and the total is 360 degrees, am I at zero position?
Is this servo controller any use for my project, or do I have to use a totally different approach (stepper motors, other encoder,…)?
Hope you understand my concern. Any answer is highly appreciated! Thanks

Servos do not have a special “zero position”. They can turn to point at any angle over their range of motion, which is typically about 90 degrees. A servo controller like the Micro Maestro simply gives you a way to use a computer to specify the target angle. You might consider an angle near the center of the range of motion to be “zero”, but there is nothing different about that from any other angle.

Now, modified continuous rotation servos do not have any sense of what angle they are pointing at, so all they can do is turn continuously one way or the other, or stop. There is no way to “move one servo 180 degrees”, so I do not think that is what you want. If you need multiple turns with feedback, you typically would want an encoder motor or stepper motor.

I am not sure how you expect me to tell you what you need for your project, since you have not said much about it, but if you have more questions, you can ask them here.

it’s a bit difficult to get a starting point if your project is more or less in designing stage, but I think you gave me the correct input to ask further.
First of all here’s a try to explain what exactly I’m trying to do (see the picture of a similar machine):
At number 1: there are four rollers to feed wire into the machine. Those rollers are controlled by one “servo”. My software needs to give this “servo” a command like: turn rollers by 720 degrees foreward and then stop (reverse should be possible but nut necessary). For this “servo” there’s no need for reading a position.
At number 2: those are the slides. Each slide’s motion is controlled by a cam, which is controlled by a “servo” with an output shaft. This “servo” needs to have a feedback about its current position as a common command would look like this: turn CW 10 degrees, delay 1s, turn CCW 20 degrees, delay 1s, turn CW 180 degrees, return to 0 point.
Not shown in picture: A winding device which is just a shaft rotating a given number of turns (i.e. 1.25 turns) and should be able to return back to a defined/set zero point.
Hope this clarifies what I’m actually trying to do. I am just a bit confused about the terminology of servo, stepper motor, etc. Thanks for the help so far. 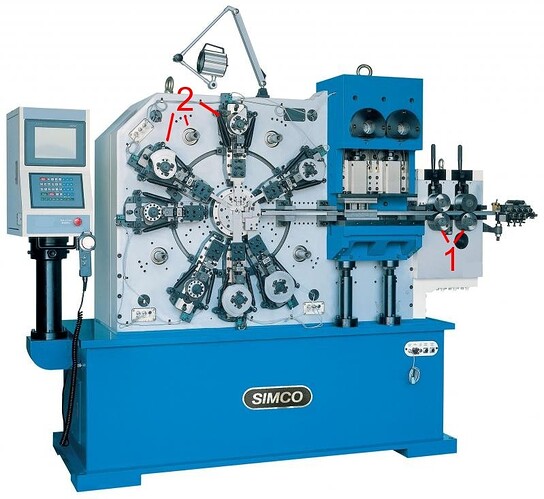 So when I read the description about the encoder (Metal Gearmotor 37Dx52L mm with 64 CPR Encoder) you posted, it sounds like the right choice. But how is it controlled, by what controller? Is it as “easy” as the Maestro or much more effort in designing and building?

The encoder motor offers more reliability and better performance in some ways, but I think that the easiest way to go for what you are talking about is a stepper motor. You will need to get a stepper motor driver (unfortunately, ours are currently out of stock), but then you can just send it pulses to tell it how far to turn. Using an encoder motor requires constant monitoring and feedback, which is a lot harder.

By the way, we also sell a “sail-winch servo” that is capable of rotating through a range of more than 360 degrees, so it might be able to do what you want for part of the setup. It does not, however, allow continuous rotation.