Whilst building the expansion board I tried an old arduino trick and put the xbee module into the sockets to keep them aligned while I was soldering the sockets to the board. Unfortunately the solder must have leaked into the socket and pin 3 become permanently attached inside the socket and is now broken off the xbee module and sitting inside the socket. Looks like Pin3 is Data In which seems pretty important so I am thinking I might be screwed from an xbee perspective. I only built them on there because I had an old working pair of xbees laying around in the bin.

I don’t have a particular need for xbee (planning on using mbed mostly) so my only thoughts are that I could solder on the wixel headers and invest in the new wixel hardware or trash the expansion board and the broken xbee and start all over if I want to use xbee.

Was a little surprised there was no pre-assembled expansion without buying a whole new robot.

I am sorry you had a problem. Can you post some pictures here that show the current state of your expansion board and XBee? 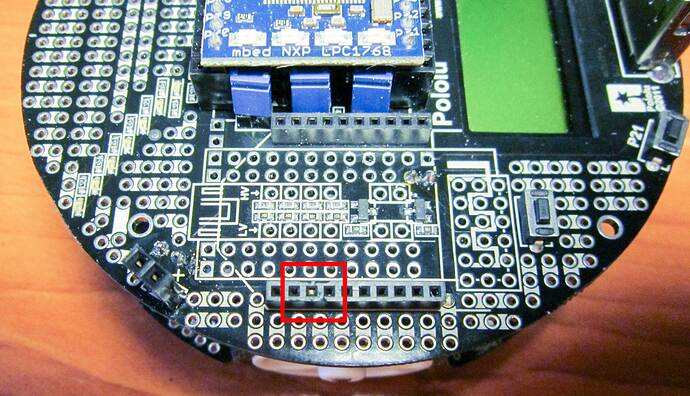 The Xbee’s missing pin’s pad looks OK on the side shown in that picture, but it looks like the trace on the PCB that connects the pin to the rest of the circuit on the PCB would be on the opposite side of the board. So, I cannot tell if replacing the pin would repair the XBee. If you are careful, you might be able to desolder and remove the 10pin header on the expansion board. Also, it looks like SparkFun sells XBee sockets, which you might use to replace the one on the m3pi expansion board.

Well I think the Xbee is at least repairable but the pins are smaller than the normal .1" arduino-size headers that I have laying around. Any idea where I could get a male header strip the right size. You really should warn folks about those sockets because as you can see from the comments at sparkfun they are notorious for this problem https://www.sparkfun.com/products/8272

Unsoldering the whole header is a bit beyond what I am willing to risk. Seems like an invitation for total disaster. What about the wixel scenario? If I went ahead and soldered on the wixel headers would a wixel module clear the now-defunct Xbee socket? (I don’t have any wixels).

The footprint for the Wixel shouldn’t interfere with the XBee headers so you should still be able to use a Wixel on the shield.