I have 6 x 3400F Maxwell ultracaps in series, with balancing – recharging to about 14V from a solar panel daily. When I switch the Ikea Dioder LEDs on, they start to change colour as the voltage drops below 12V. A regulator that maintains it at 12V would be ideal for maintaining steady light – however I have noted large capacitor power sources do not always perform as expected with DC-DC voltage converters. 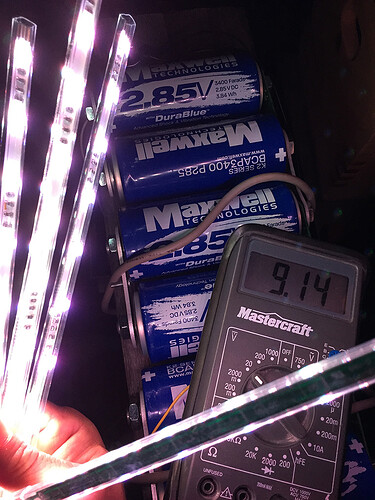 Thanks in advance for your response.

We have not tried our regulators with super capacitors, so we cannot give you much advice. I would not expect much trouble when powering a switching regulator from a super capacitor (there are more issues to worry about when using a regulator to charge one instead).

In general if the voltage on them is dropping because they are having a hard time supplying the necessary current for your LEDs, adding a regulator might keep the voltage up, but it might also have trouble handling the current. How much current do you expect your LEDs to draw at 12V?

The original LED power supply sources up to 5W at 12V, so only about 0.5A, a 2A regulator should work easily. Mainly I was concerned because the ultracapacitors have very high specific power or power density, they can source hundreds of amps very quickly (which is why they are used to start cars), – can the regulator handle this kind of transient during switching. Capacitors also have effects batteries don’t, a further complication.

I used one of your buck converters [https://www.pololu.com/product/2885] to change them from a 320W panel (8A at 40V) but it got very hot, not sure if that’s normal behaviour or not. So if there are issues around charging them, do say what they are! I don’t want to leave it charging and go out if I haven’t used it properly.

Even though supercapacitors can source lots of current, they won’t just push it into a regulator or other load. Generally, a load draws the current it wants from the source, so as long as your LEDs do not draw more than the regulator can handle, it should be okay.

As for using a switching regulator to charge a supercapacitor, the main issue I was thinking of was the uncharged capacitor looking like a short to the regulator and thus, the regulator not turning on. There could be other issues after that point, but as I mentioned, I do not have much experience with supercapacitors. You can probably find plenty of advice elsewhere online though. For the D24V150F12 regulator specifically, outputting 8A with 40V is at the very edge of its capabilities, so it is not surprising to me that it would run very hot or even overheat.