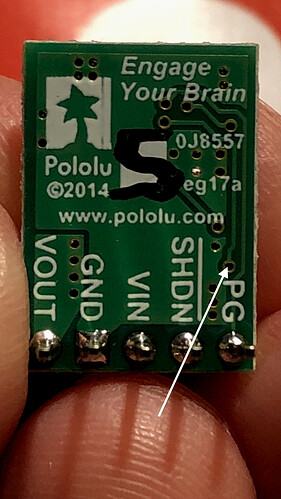 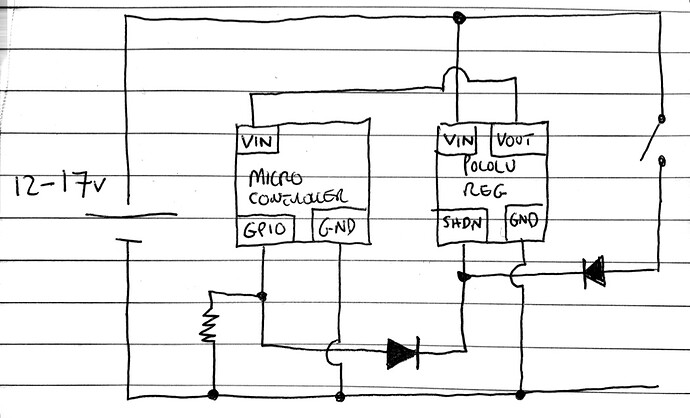 I have a couple of questions regarding a project I’m putting together. I’m a relative beginner at this so please bear with me…

I have a D24V10F5 which I’d like to control using a switch and an Arduino board. I’ve enclosed a schematic of my proposed circuit and a pic of the regulator. I would like to be able to turn on the regulator / microcontroller using a switch and then have the microcontroller turn itself off in software. I’m aware of the Pololu pushbutton switches but I’m really pushed for size in this project.

My plan is to first of all break the trace annotated on the pic in order to cut the connection on the Pololu regulator between SHDN and VIN.

When the board needs to turn itself off, the GPIO pin is sent “low”, turning the regulator off.

My questions…
First of all does this sound correct / feasible?
Will the SHDN pin be pulled “low” correctly in the above instance through the diode? I’ve added a pulldown resistor to the GPIO output, but I’m not convinced it’s needed.

Secondly - have I got the correct trace to cut on the Pololu regulator? I’ve considered attempting to remove the resistor but it looks too small for my big clumsy fingers.

Many thanks in advance!

Your general plan seems feasible, but there are a few details that need to be worked out better. First, the pull-down resistor in your schematic should not on the GPIO; you would want to put it on the SHDN pin instead.

Next, cutting that trace will disconnect the SHDN pin on the regulator chip from the pin on the header, so that will not work. You will have to remove the pull-up resistor I circled in the picture below. 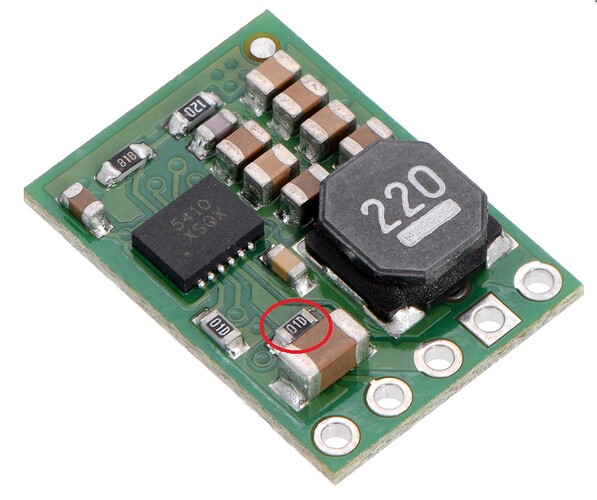 Also, I am not sure what your switch is, but you may have trouble ensuring the switch does not bounce to much and closes long enough for your regulator and microcontroller to get going on their own.

Presuming that there is enough time for things to start up, there will be an interval where the SHDN pin will be connected to both your power supply and the high GPIO signal, which could lead to problems. The diodes you have are probably enough to prevent anything from breaking when that happens, but to be safe, you might consider adding in-line protection resistors.