For my project I’m trying to power a generic 4.8-6V RC servo (link here) through a D24V10F5 5V buck regulator, itself powered by a 12V wallwart.

I tried running a simple turn and return code as below:

I tried two suboptimal workarounds that appeared to work:

I feel like i’m missing something frustratingly obvious here, but i don’t know what, and unfortunately I don’t have an oscilloscope to test this for myself. Does the D24V10F5 generate a lot of EMI which interferes with the servo PWM?

I just ran my setup through an oscilloscope.

I don’t think there’s any EMI on the PWM signal since it still looks clean during operation: 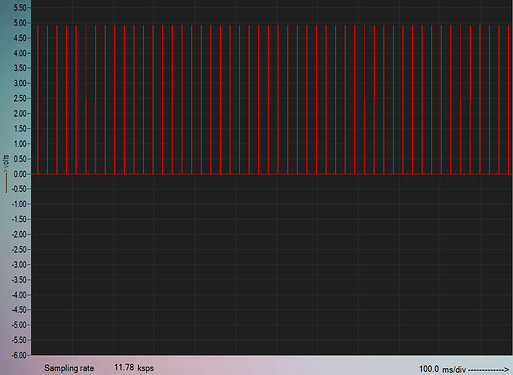 But apparently the D24V10F5 was failing to deliver a stable 5V to the servo: 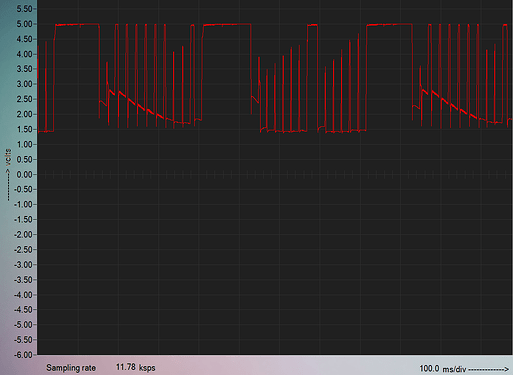 This was measured while the servo was tasked to hold a constant 900us position. It constantly and rapidly oscillated around the target position.

Is this a product defect or am I doing something wrong?

A typical servo of that size can easily draw short bursts of current in excess of 2 A, which would be well beyond what that 1 A regulator can supply. How were you measuring the current when you concluded it was peaking at 300 mA? Can you look at the current draw on your scope and post some captures of that, both when it is powered from the regulator and when it is powered directly from your wall wart?

Solved the problem by getting a D24V50F5 instead. It seems the servo was drawing more current than a D24V10F5 can handle.

A bit confused why a 5V 1A wallwart works ok though.

I expect if you just look at it with your oscilloscope, you will get a better understanding of why you didn’t have any issues with the wall wart. (Probably the voltage drops were not as pronounced.)