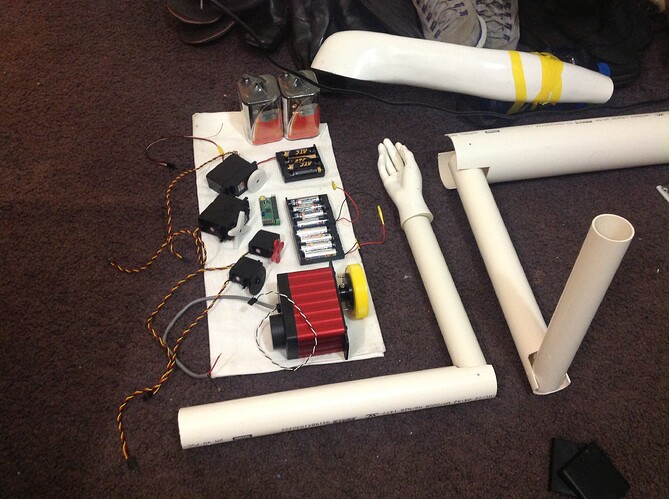 I just bought the really nice Torxis 12v servos, but because of their gigantic size, they will not fit inside the arms or even shoulders of my full-scale humanoids.

I understand that servos require gearing, but doesn’t everyone agree that the shaft being off-centre renders them pretty useless for most robots?

I need cylindrical shaped 6 or 12 volt hobby servos. The shaft must be in the middle. The wires must come out the back. This way they can be put in the middle of tubes and rotate things such as shoulders, necks, elbows and wrists.

Anyone know where I can buy some? The only ones Ive found have been industrial for lifting hundreds of tonnes of concrete.

If they truly arent manufactured for hobbyists, which pulleys and belts work best? Is there a way to know which parts will fit which servos before I have to buy all of them and use trial and error? Each shipment costs me $150 for postage alone.

Nobody has replied to any of my previous posts, so Im guessing this forum might be the wrong place to ask. If anyone is out there, please reply.

I am not sure where you might find servos with shafts in the middle, but you might look into other motor designs. I have seen other automated humanoid projects use car window motors for their joints. As for pulleys and belts, you might try looking for them at websites like ServoCity, FingerTech Robotics, or SDP/SI. In particular, ServoCity lists which servo spline outputs their products work with.

If you have not yet, you might try posting your questions on animatronic specific forums.

Thanks Jeremy, I only just found out yesterday that the term ‘robot’ is used in forums mostly by people assembling little toys and remote control cars, and that ‘animatronics’ is used for full scale humanoids. I’m relieved to see that the animatronics people are using hobby servos - I was worried I would need to spend thousands of dollars on servos.