Cotrol a servo with Orangutan Lv?

I’m new in robot world. I have a little robot with an orangutan lv, i know how to control motor and use inputs to control it. But now I’m trying to control a servo with this board. i Know hot to conect the servo but when i try several exemples codes form arduino librarys but my servo doesn’t move. I tried these:

int potpin = 7; // analog pin used to connect the potentiometer
int val; // variable to read the value from the analog pin

i tried to put the servo in a digital I/O but it doesn’t works.

Servo myservo; // create servo object to control a servo
// a maximum of eight servo objects can be created

Please help, i don’t know how to cotrol it .

How are you connecting the servo to your Orangutan, and how are you powering it?

ok here i left you an image how i conect it, but in the pin nº 5, analogic, i’m not sure but I think that my servo is analogic. i tried in digital output but it didn’t works.
tell me there are something wrong? 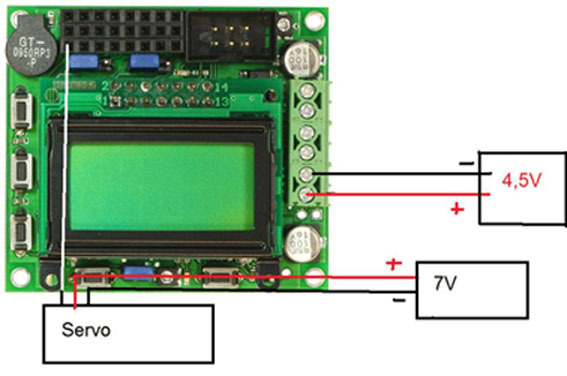 Do you have a ground connection between your 7.5V and 4.5V power supplies? Without a shared ground, there is no way for the servo to measure the voltage of its control line.

No i haven’t a ground betwen my 7v and 4,5 power suplies.

Are you telling me that it is the problem?

I will try it… i hope that works

There are potentially a few other problems with your setup. First, analog and digital servos typically respond to the same control signals. The descriptor “analog” or “digital” refers to the internal electronics that take care of the servo’s positioning feedback loop. You do not need to us an analog input pin to send signals to an analog servo (analog pins on the Orangutan can only be used to read analog voltages; they are still digital lines when used as outputs).

Second, your code implies that the servo is connected to Arduino pin 4, which corresponds to mega168 pin PD4, a pin that isn’t even brought out to the 3x8 female I/O header on the Orangutan LV-168. The I/O header has pins PD0, PD1, and PC0 - PC5. In terms of Arduino pin numbering, these would be pins 0, 1, and 14 - 19 respectively. In your diagram, you are connecting to pin PC5, which is Arduino digital pin 19. 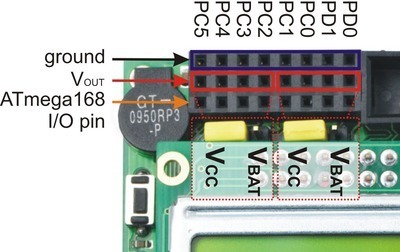 I don’t know the details about how the Arduino servo library works; can it control a servo on any digital output pin, or does it require connection to a hardware PWM output?

Ok thanks for the informatio, i didn’t know it.
The second problem is solved, mistake mine.

About the question, "how the Arduino servo library works; can it control a servo on any digital output pin, or does it require connection to a hardware PWM output?"
I don’t know, i was trying to learn and understand how it works…

is there another way to cotroll the servo with orangutan?

I assume the Arduino servo library documents how it works and what its limitations are, so that would be a good place to start looking for information.

Controlling servos isn’t that difficult, especially if you can use delays to achieve the pulse timing. If you need to be doing other things while generating the pulses, then it becomes more challenging, especially if you want to control multiple servos.

If you want some sample servo control code, please take a look at the example in our Pololu AVR library, which you can download here.

The servo control sample program can be found at:

I had the same problem, but I found this library much easier to use.
It’s been designed so that you can run many servos at once but it works just as well with one.

Once you’ve installed the library, it’s easy! Here’s some code for an easy test I wrote. You turn the trimpot and it turns the servo.

It’s not pretty code but I hope this helps anyone else with the same problem.