Control servos and leds with Maestro 6, using a Reed Switch

I would like to expose the “draft” of a project and ask you two question about the use of Maestro 6 to control servos and leds using a Reed Switch.

My intention is the following:

A) Use the “button or switch to control servos” script to control 1 servo and 2 sets of LEDs connected to three different channels on a Micro Maestro 6.

B) The servo must stay running all the time when “on”.

D) The other set (Y) is to fade in and out when “on”, thanks to a little circuit which the set will be attached to. The circuit, for his turn, will be connected to the controller.

E) I will use a magnectic reed switch to act as the puch button on the script.

F) The sequence will be:

Thank you for your attention.

I do not see anything wrong with using a reed switch with the Maestro the same way you would a pushbutton. I am not sure what you mean when you say you want the servo to remain running until you turn it off. Do you mean continue rotating in one direction? If so, you should use a continuous rotation servo, which allow you to control the speed of the servo with hobby RC servo signals (instead of the position like a standard servo).

By the way, it sounds like you might have some kind of additional circuitry for controlling your LEDs; is this the case? Depending on your LEDs, it is usually good practice to avoid powering an LED directly from an I/O pin by using something like a MOSFET.

Yes, I want the servo to rotate continuously until receive a command to stop. Is there any problem to connect a servo like this directly to a channel? I would like to make the servo rotation speeds up by increments until reach a desired velocity.

About the Leds, yes, both sets have several leds. One of them is pretty simple, being just six Leds connected in serie; the other set is composed of four Leds driven by a circuit which makes them to fade in and out.

Both sets will be connected to separate channels on the Maestro 6. Would that be possible?

You can control a servo directly from a Maestro channel (the Maestro provides the logic signal, which does not need to source a lot of current). Please note that you will still need to power the servo. You can find more information about options for this in the Powering the Maestro section of the Meastro user’s guide.

It sounds like you might not be familiar with continuous rotation servos. Continuous rotation servos allow you to control the speed of the servo with standard servo signals (instead of the position). The speed will be determined by how far the pulse width signal is away from the neutral (which is typically around 1500us). If you are interested in more details about servos and how they work, you might consider reading through our Introduction to servos series of blog posts.

It is possible to connect your different groups of LEDs to the Maestro, but as I mentioned previously, you should not be driving the LEDs directly from the Maestro I/O pins. You might consider using some RC switches with small low-side MOSFET to safely control power to your LEDs using the Maestro: 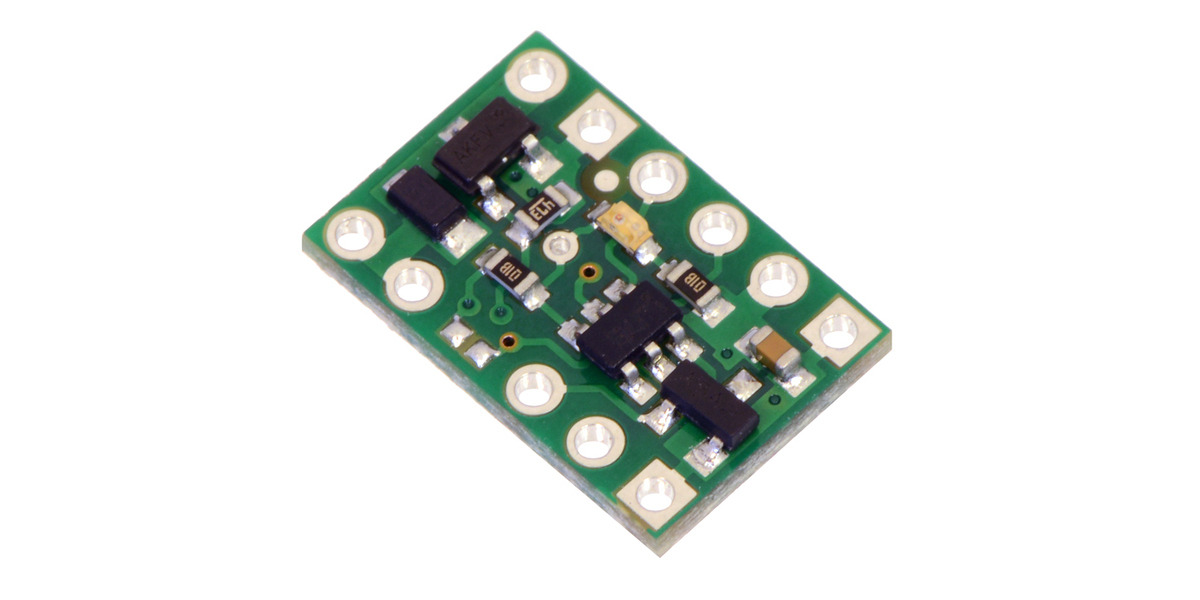 This RC switch converts hobby radio control pulses to digital on/off signals and has an integrated small, low-side MOSFET that allows it to drive small loads (up to around 3 A), such as lighting or small actuators. The activation threshold and...

I built the circuit and everything was ok except for one detail. I am using
a continuous rotating servo which has only two wires (+ and GND).

The positive wire has to be connected to the signal pin of the channel or,
otherwise, the servo would be continuously running and I want it to be
turned on just when needed.

However, the signal pin delivers only around 3V and the servo needs 9V. I
think that the only way to bypass this problem would be installing a
voltage regulator to step-up the voltage from the signal pin to the servo.
Is that right?

I suspect that you have a DC motor. Unfortunately, the Maestro cannot control DC motors directly, so you will need an additional device in between the Maestro and motor. I recommend using an electronic speed controller (ESC), which is a motor controller that respond to servo signals. We have a line of Simple Motor Controllers that can act as an ESC which you could use, but you could probably find simpler, cheaper options on other RC hobby sites.

Thanks you for your detailed answer.

Yes, it should be a DC motor. I am a novice. Sorry!

However, since I don’t need to control it’s speed, nor the direction, could
the solution I presented works?

I only need the motor to turns on and off in an sequence and moment
programmed in the script.

The Micro Maestro’s signal pins can only source up to 20mA, which is probably not enough to even start spinning your motor, so using a step-up voltage regulator will not work. It would be best to use an RC switch with small low-side MOSFET to control the power to your motor from your Maestro as Brandon suggested in his last response to you.

Ok, thanks for the advice.