I’m ready to order a 3pi, but am wondering what sort of battery charger I need. Any recommendations? The more specific the better; I’m new to robotics and have never even visited a hobby/rc store!

BTW, it would be really nice if Pololu sold a suitable charger, perhaps in a combination deal with a 3pi, programmer, batteries and charger. It would be nice to just open the box and have everything I need to get started.

I haven’t used this one in particular, but it looks like it should be nice:

The features you want are ability to charge 4 NiMH cells in series (they are usually in battery packs, not in battery holders like on the 3pi) and to be powered by AC (a wall outlet). In general, having more flexibility (1-8 cells in the example I linked to) is nice for future projects.

Also, since the 3pi just uses ordinary AAA batteries, you can buy battery chargers (into which you stick the batteries) at most general electronics stores. For example, I saw this at the Radio Shack web site:

The small downside to a charger like that is that you have to remove the batteries from the 3pi to charge them.

Thanks for the feedback about getting chargers. We’re on the lookout for something appropriate, but it’s difficult for us to sell things competitively when you can get them at Costco or Best Buy.

Thanks for the quick reply, Jan. I had considered the out-of-circuit charger but would not want to have to remove the batteries each time. It looks like the LCD needs to be removed to get to the batteries, and I’d be concerned about a connection failure after a while.

It looks like this particular charger has spring-loaded terminals, so I’d need to make up a cable to connect it to the 3pi. What sort of connector would I need for that?

Any other charger suggestions from anyone are still welcome, preferably something simpler and more “plug and play”-like if such a thing exists.

You can simply use two jumper wires, plugging one side of each into the spring-loaded terminals and the other side directly into the female charge header on the 3pi. Additionally, you could solder the two wires to a 2x1 male header strip or right-angle male header strip, which would plug directly into the 2x1 female charge header. The single-row male headers come with 25 pins, but they can be broken into smaller strips as desired.

Thanks, Ben, I have some male headers left from an Arduino project and will go that route.

Sorry to ask such basic questions, I represent the “people with C programming experience who want to learn robotics” element of your target market and some of this is new to me!

Thanks for the help, I’m looking forward to getting started.
H.

No problem at all, everyone’s got to learn somewhere. I hope the 3pi gives you a fun and informative introduction to robotics! Good luck with your projects and don’t hesitate to post here if you have further questions.

If I can offer a suggestion -

Now that the robot bug bitten, you’ll soon find yourself facing a a wide array of platforms, and battery types - NiCad, NiMh, Lipos, and for the bigger robots, sealed Lead acid. And like many of the electonic devices around your house, none of them use the same type of charger. In addition to robots, I do build radio control models as well, so I bit the bullet a couple of years ago, and bought a Triton computerized charger. Best decision I’ve made in a while - there’s pretty much nothing that it won’t charge. The current version of the charger is running about the same price as I paid, and can be found below:

The prince may seem steep (and you will need a 12V power source as well), but I can assure you (based on personal experience) that you’ll save money in the long run.

I very much agree with md10bldr. If the 3pi is the only thing you’re ever going to use with rechargeable batteries than a cheap one-purpose charger is totally fine. I played around with individual chargers specific to battery pack chemistry and number of cells for years, and in hindsight I wish I had picked up a good all-purpose charger like a Triton long ago. 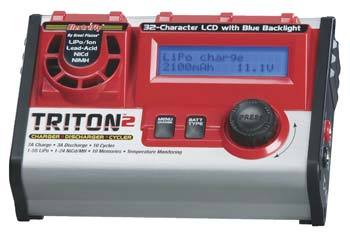 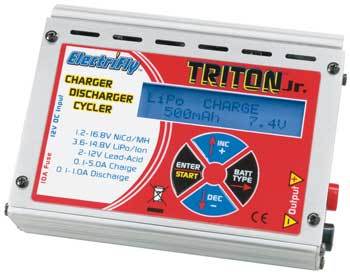 The Triton 2 is a fantastic charger, but its probably more capability than you need. I recently picked up a Triton Jr at my local hobby store, and I couldn’t be happier with it. It’s smaller than the Triton 2, costs less (TJr: ~$75, T2: ~$130), and is quieter. The Triton 2 has a fan that is on during all charging/discharging, while the Triton Jr is essentially an aluminum heat-sink with a charger inside. If you’re going to be good stay around while your batteries while they charge, you might not want to have to listen to the fan.

The Jr doesn’t have the extreme capabilities of the Triton 2 (for example: lower max charge and max discharge currents, the TJr will only charge up to 12V lead-acid batteries, the T2 will charge 24V packs, the TJr can charge up to a 4 cell Li-Po or Li-Ion pack, the T2 can charge a 5-cell pack, etc), but it’s still incredibly versatile. I would equate this to the difference between a car that can go 100MPH and a car that can go 150MPH. Some people do actually want/need the extra speed of the faster car, but the slower car is still plenty fast for the vast majority of driving.

That said, I was having still having trouble deciding which one to buy, until I talked to a friend who had bought a TJr, returned it (store credit only) and bought a T2, then regretted it and wanted his TJr back. He has offered to trade me his T2 for my TJr (plus the difference in cost), but I haven’t taken him up on it…yet.

P.S. As the previous post mentions, keep in mind that, as with most/all professional battery chargers, you will need a separate DC power supply for either Triton. The T2 manual says:

To achieve the absolute maximum output power, the power source must be capable of delivering
at least 6.5 amps of current while maintaining 12 volts DC.

Before you drop $50-$100 or more on a power supply, keep in mind that you can scavenge one form an old PC tower. I haven’t yet felt the need for “absolute maximum output power” anyway, and cheap 12V 3A switching desktop power supplies like one of the ones here work just fine.