Case Study of a "Case Mod"

Most computer geeks who go for case mods put in windows (no doubt to go with their WinDoze), often with bright lights and decorative internal cables. Or custom paint jobs. Or elaborate cooling systems. Occasionally, you’ll see a computer case veneered in hardwood. Once in a while, you’ll even see a computer that’s been steampunked (just do a GOOGLE image search on “steampunk computer”).

My own case mod is a bit different in nature. It just involves an unused drive-bay on my beautiful new beige (yes, BEIGE!) computer case (one I’d specifically bought for the large number of front-panel drive bays).

I’m into sight-gags on computers. I’ve used a “brick wall desktop pattern” ever since I customized my first Macintosh floppy disk back in the late 1980s. My hard drive icons are either flowchart symbols for disks, or more recently, 1970s-era removable disk packs. My icon for Mozilla Thunderbird is carrying a bottle of Thunderbird (you know, the cheap wine!).

I’m also a fan of Bill Holbrook’s “On the Fastrack” comic strip. It’s a workplace strip, but one with both a strong computer element (much stronger than Dilbert’s) and a strong fantasy element (like a shape-shifting dragon, named “Candy Moatmonster,” as the company’s chief of security). And one of the running gags of the strip has been a desktop computer so ancient that it has a huge wind-up key sticking out of it.

And I’m also a contrarian as far as computing power is concerned: instead of wanting fast, overpowered boxes to make up for the shortcomings of WinDoze, I prefer to run older boxes with faster operating systems. For example, my notebooks are 486s, running IBM PC-DOS 2000. My Mac is a “bionic desk lamp” iMac. And this case mod is on a DOS/Linux dual-boot, one that originally had the motherboard out of a Fry’s cheapie, then when that motherboard somehow lost its ability to run Linux at any reasonable speed, I installed the motherboard out of an old Dell XPS D300. (NOTE: Dell motherboards of that generation have proprietary power connections: industry standard ATX power plugs will fit, but if you actually apply power, something gonna blow up!)

I wanted a wind-up key. An animated one. Sort of like the ones they make for automobiles, only smaller.

The first idea didn’t even make it to the prototype stage: a little battery-operated motor designed to hang from a Christmas tree branch, and slowly spin an ornament hung from it. Clever, and the RPMs were in the right ball park, so I ordered some, CHEAP, out of eBay, figuring that if all else failed, I could use them for their intended purpose.

Turns out they don’t have much torque hanging shaft-down, the way they were intended to, and if you turn them on their side, it’s hard enough to get them to start, and nearly impossible to keep them from stalling.

Regarding the computer itself: when my cheap DOS/Linux dual-boot from Fry’s blew its hard drive AND its monitor, I decided to get a brand new custom job. Big mistake: turns out that the custom job, while probably fine with WinDoze, couldn’t run DOS without crashing, and refused to recognize a second floppy drive, or even its own serial port. It went back without my even attempting to install Linux. Fortunately, the custom-builder had a “no-questions-asked money-back” policy, and I just managed to get it back on the last day to do so.

So I gave it a bit more thought. And I realized that there was something else small and cheap, that ran on low voltage DC, drew very little current, and turned very slowly: a battery operated clock movement. So I ordered a high-torque movement, designed to drive oversized hands, and hooked a driveshaft onto the second-hand shaft of the movement. 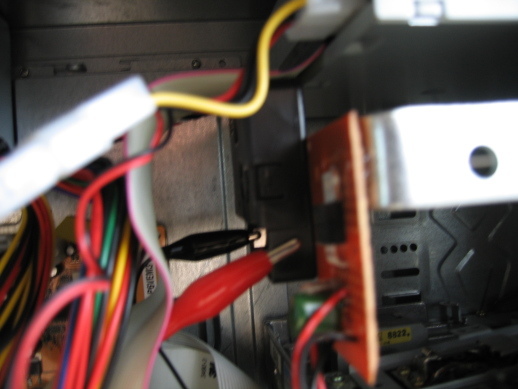 It was a bit slower than I would have liked, and it moved in distinct ticks, but it sort of worked.

But the more I futzed with it, the more it kept stalling.

And it was about that time that I determined that the motherboard had somehow lost the ability to run Linux with decent response times.

Then, I requested, and was given, the salvage rights on one of the old Dell XPS D300s at work. And I decided to look again for a better way to drive my sight-gag.

So I did a GOOGLE search once again for low speed motors, and happened upon a reference to a Solarbotics GM-2. Hmm. 38RPM. Not bad: a little fast, but one more level of reduction would work. Now if only I could find a vendor who could supply ONE of them, without charging me more for shipping than the motor itself costs . . .

Then I found them at Pololu. Along with something else.

So the Solarbotics GM-2 would work, if I could add one more reduction stage to it. But what kind of reduction? Gears, unfortunately, are neither cheap to buy (as I found out on Pololu and other web sites) nor trivial to make. Chain drives tend to be greasy, and besides, I have neither sprockets, nor drive chain. Friction wheels might be a possibility, but they require fairly heavy pressure to work well. Or I could use a belt drive, if I could find some sheaves.

I didn’t have far to look: Pololu has sheave kits from Tamiya, and with their 70140 kit, I could rig a double belt drive with almost a 3:1 reduction, and still have enough parts left over for either a double-belt 2:1, or 2 stages of single-belt 2:1.

So I took an ordinary 5 1/4" drive-bay blank-out plate, and added a block of 1x2 poplar, to give it enough thickness to support the piece of Plastruct tubing that would be my main drive shaft bearing. The drive shaft is .081" brass rod.

I mounted the motor on the blank-out plate, with a thin foam pad to try and suppress some of the noise, poking its shaft through a hole in the pad and the plate. I found a double bushing that would snugly fit a 4-40 machine screw, mounted a pair of 11mm sheaves on it, and screwed it to the end of the motor shaft.

Finding another double bushing, one that would snugly fit the driveshaft, I mounted the pair of 30mm sheaves on it, mounted it on the end of the drive shaft, and crushed the end of the shaft slightly, so that it wouldn’t come loose. I also added a single bushing of the same hole size, to help keep the shaft from sliding out the back.

The belt stock that comes with the Tamiya sheave kit looks to be little more than common rubber band stock; this wouldn’t hold up inside a computer case. So I used large, skinny O-rings. In fact, after “ballparking” the size of O-ring I needed, I used the O-rings themselves to figure out where to put the motor. 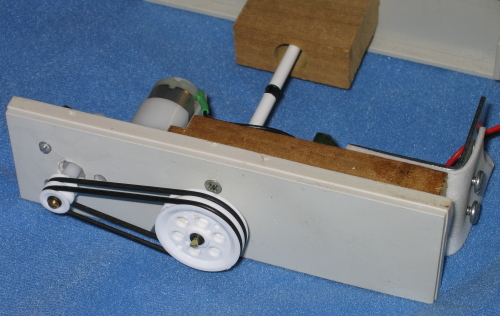 Since case fans normally tap the 12V bus of a drive power cable for their power, I’d do the same thing, with a simple 5VDC regulator to cut the voltage down, and a .1 microFarad capacitor to absorb any electrical noise generated by the motor.

Then I took some more of the Plastruct tubing, and made an outer shaft to match the drive shaft in the earlier version This done, I did a test fitting, so that I could cut the drive shaft to length, and figure out how to mount the drive unit.

After cutting everything to length, I hammered a flat spot in the drive shaft, so that the outer shaft would have something to grip, drilled and tapped the mounting bracket I’d marked up at the test-fitting (for 2 6-32 screws to go in drive mounting holes in the bay), and screwed the modified angle bracket to the end of the piece of poplar (with more craft foam to absorb as much noise as I can). 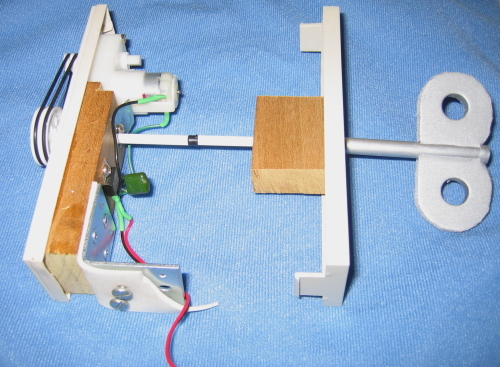 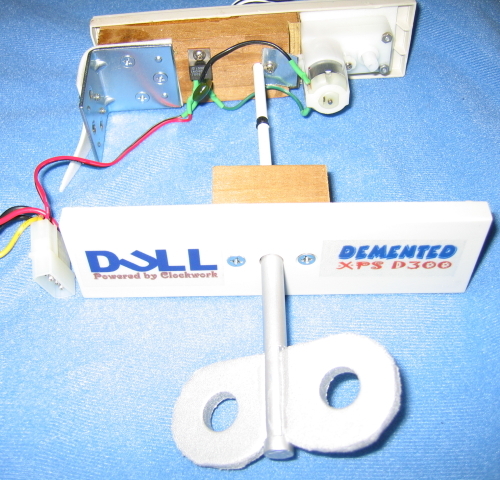 The key (more craft foam, with a shank made of Plastruct tubing and brass tubing) and the front bezel (another drive bay blank-out plate, also with a piece of poplar mounted on it), are from the Mk. I version; note that instead of a “DELL DIMENSION XPS D300,” it is a “DULL DEMENTED XPS D300” Just as the whole idea is inspired by On the Fastrack, “DULL” is a nod to the computer company that figured prominently in a Get Fuzzy storyline.

I suppose that if I found I could still hear the GM-2, with the case closed up, over the case fans and hard drive, I could always add a simple switch that would cut off power to the motor if the key was out. I’d have to drill out the block on the back of the bezel, to accept some sort of feeler.

(And to the moderator who removed the spam posting I saw the other day, THANKS!)

So I’m not exactly clear on what it is. Do you put it in a CD-drive-size bay on your computer and it looks like the computer is a wind up toy? Do you have any pictures of it installed?

Or more generally, that it’s such an antiquated system, it’s powered by a mainspring instead of electricity.

Do you have any pictures of it installed?

Give me a bit of time, and I’ll try to provide one that shows it in action.

It’s rather bulky, for a small, grainy black-and-white image, but here is an animated GIF loop of the finished case mod.

Once all 77 frames load, it will move at normal speed. Full color would have been around 2M

as an animated GIF, and at the moment, I still have no place to put an AVI.

Wow! That looks like so much fun when you actually see it sticking out of a case. The case looks otherwise pretty normal, but when I look closer I’m surprised by the key turning.

One place you could try hosting your video file is YouTube.

A tighter crop on that picture, animated at 7 frames per second (but in full color, since it’s only 48 pixels square), is my new Linux throbber.

And when I finally think of a new password so my sysop can unlock my web site, I’ll store the video there (and probably remove, or if necessary, politely ask a moderator to remove, the bulky animated GIF attachment from the thread).

Ok, now U have a partially-wooden computer =))
But looks very unusual and cool =) Have U been asked, if er computer works on springs and how long does it lasts on one wind ? =)