I have a MICRO MAESTRO 6-CH USB SERVO CONTROLLER.

Servos are connected correctly. Signal to the inside . Dark wire to the outside.
Powered by 4 AAA batteries. 1.5 Volt X 4 Negative to outside

When I plug up a servo I can control it but it never stops vibrating. The servo gets hotter and hotter until it burns up. The buad rate was set a default 9600. I turned the baud rate down as low as 2000 but that did not really seem to help. I have burned up muliple servos.

Constant vibration from a servo is definitely not normal. How are you controlling the Maestro? If you are only using the USB connection, the baud rate parameter is not relevant. Can you try using the Control Center and setting the position to 1500us, which most servos should be able to handle? What do the servos do when channel is off/disabled (for example before you set the position)?

Finally, your servos might just not be able to handle the 6+ volts that you are using. What servos do you have? Can you easily try 3 cells instead of 4?

Note: Center 1500 position is the same as any other. It will just set there and vibrate.

What do the servos do when channel is off/disabled (for example before you set the position)?

I am out of good servos I guess. One was working last night but I can’t get it to respond at all now. That’s the 4th one. I guess I will have to find another one. I am pretty sure though that with the channel off there was no activity at all.

I really do not know what might be causing the problem. Have these servos worked for you with an RC receiver or any other kind of servo controller before? Can you post a picture of your whole setup, including a burned-out servo?

Hello!
I’m having the same problem with my 6CH controller. Regardless of servo voltage, the servo hums when it is enabled. This occurs whether controller is USB connected or running on its own power. I’ve only lost one servo, a TowerPro SG-5010, but I don’t want to lose another one. Could a firmware update help?

In the true nature of answering one’s own question, upgrading the firmware on my controller fixed the vibrating servo-burnup problem. While I did already appear to be running the most up to date version, apparently it had became corrupted as directly after replacing the firmware the servo vibration stopped. I hope this information helps others!

That’s interesting - but did you try “Reset to default settings” before doing the firmware upgrade? It is possible you just had some weird settings that were causing the vibration.

I did “reset to default” multiple times and it did not help me. I will upgrade firmware this weekend. I have not updated it at all yet.

Have these servos worked for you with an RC receiver or any other kind of servo controller before? Can you post a picture of your whole setup, including a burned-out servo?

I have the same problem with my brand new Maestro 6ch controller. I got it today, installed the driver, pluged it to my computer and connected it to a batterypack. But the servo is just vibrating. Not moving, just vibrating.
When i activate the servo in the Maestro Control Center, it starts acting randomly. The servo works fine with other RC receivers.

I uploaded a photo showing the setup. I haven’t tried to burn up a servo jet, but if it should happen, I’ll take a picture of it. The red and white wire are 6V (300mA). 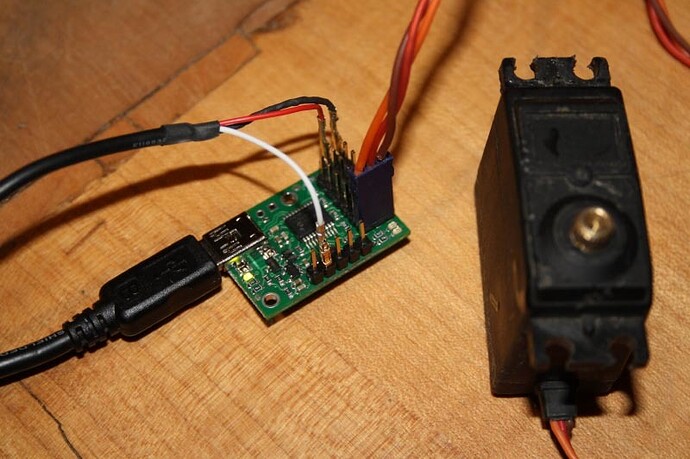 The firmware is up to date, version 1.01
Is it possible, that i got a corrupt product?

What do you mean when you say that the wires are 300mA? If you mean that your battery is only rated for 300mA, that is definitely not enough current for a servo. Did you use the same battery with the RC receivers?

The servo worked with 300mA and RC recievers.

I changed the battery to 6V and 2600mA. But it didn’t change anything. The servo still acted random and stopped working after a few seconds. Well, take a look at theese pictures. A few hours later I burned up the Maestro, too. But that was my fault 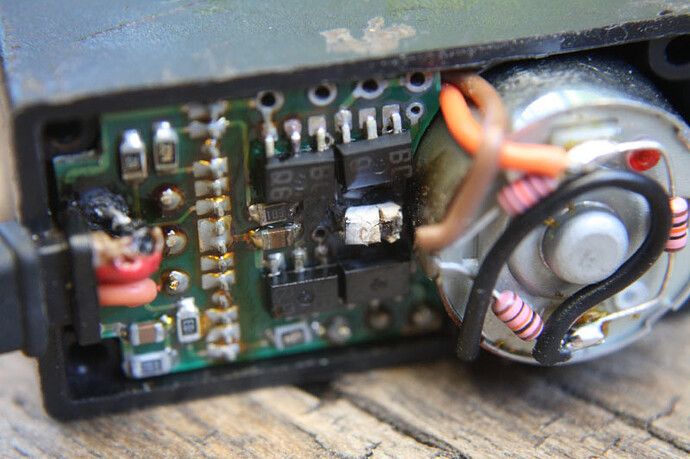 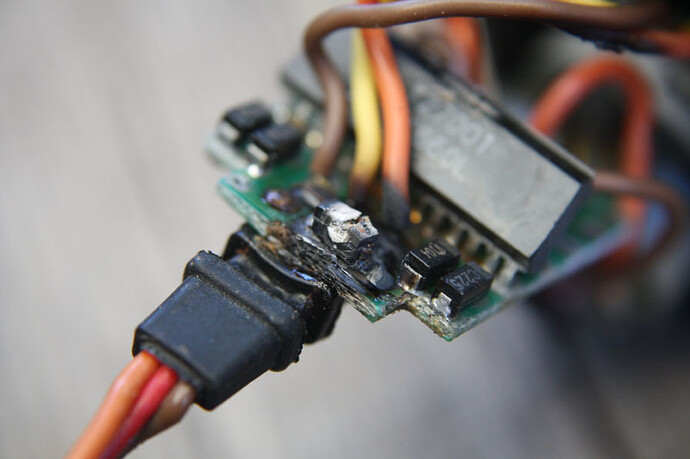 It sounds like you are confusing mAh and mA.
How did you destroy your Maestro?

Oh, i mean Ah. Interesting read, by the way.

I accidently touched one of the connections to the main chip on the Maestro with a cable from a battery. Now its getting really hot when I connect it to a computer using USB. No LEDs are lightning and I’m not able to reset it using RST.