Bluetooth Receiver for a Chronograph

Hi, guys. Just wanted to post my recent Pololu-enabled project here. I should mention the majority of my electronics projects up to this point usually involved either a PC power supply or a 12V car battery. Looking at some of the other projects here made me feel like I was playing with LEGOs.

My goal was to build a wireless Bluetooth-to-Serial receiver for a CED ProChrono Digital chronograph. (The chronograph uses optical sensors to measures the velocity of objects traveling overtop of it.) The chronograph has a 3.5mm stereo jack that serves as a serial interface. CED sells a wired serial-to-USB solution, but I wanted the freedom to use the chronograph without the limitations or fuss of a wired connection.

The call to use a wireless Bluetooth option was pretty easy to make given the abundance and availability of Bluetooth-to-Serial modules. Just about anything with the HC05/HC06 chipset would work. Power, on the other hand, had lots of variables. Although the Bluetooth module will take a 3.3-5V input, I wanted to give it a 5V input to make sure I got maximum range out of the Bluetooth module antenna. I had also done enough research to know that I wanted a switching power regulator, but that was about it.

The chronograph uses a 9V battery for its power. Eventually, I want to get the Bluetooth receiver integrated inside the chronograph enclosure and tap the internal 9V battery. However, in working up the prototype I wanted to build an eternal unit to get the bugs worked out before I started tearing up the chronograph. For the external unit, it was basically a balancing act between battery size, voltage, capacity, and current draw.

Many, many thanks to Grant for his generous assistance in working through the power options with me and educating me at the same time. I ended up using the Pololu S7V8F5 for the initial prototyping since it allowed me use just about any battery source for the testing. When I finally built the external receiver I was balancing battery size against run-time and ended up using 2xAAA with the Pololu NCP1402. I figured I could get more run-time out of the NCP1402 since it’s a step-up regulator and more efficient with a lower minimum voltage.

The hardest part of the build was getting the virtual COM port working over Bluetooth in Windows - that was straight-up voodoo, and I’m still not exactly sure how it works.

Here are some of the pics of the prototype as it developed: 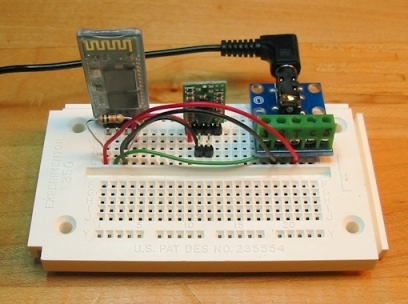 Inside the enclosure. You can see the NCP1402 in the upper right. 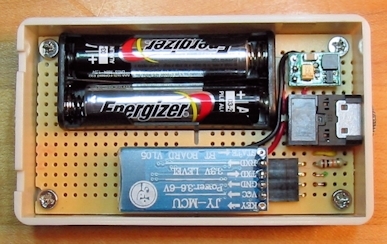 Thanks for sharing your project with us. We will be adding it to our Community Projects page.