Bitten of more than I can chew!

I took a leap and landed in it! I have never programed in c or any micro controllers. I’ve always wanted to and seen the Orangutan SV-328 on special so I grabbed one. I’ve done Basic on PCs and thats about it (thinking I should have started with a Basic Stamp). Anywho… I can learn quickly just need a bit of a jump start to get things rolling.

So the plan is to mount the IR on the servo so it can scan for a clear path and wander around my house aimlessly till I get a bit more advanced. At the moment I’m not worrying about the servo I just want to get some readings and it moving without human interferance!

I need a bit of code to show me how to setup the input from the ir and spit it out on the lcd so i can get some data to use when writing the rest of the code. Also a little sample of how to make it interperate this reading and perfom an action (stop,backup,turn ect). I have scoured google and come up with a lot of adurino stuff but not much orangutan (might not be looking in the right places?). Once I have that I should be right! Then I’ll try nut out the servo control and add some encoders.

The Pololu AVR libraries make it easier to do what you want to do, but I think the biggest hurdle for you will be getting used to the C programming language. I suggest as a first step you search online for a good C tutorial/primer (there are a lot out there) or buy a book on C. Once you’re more comfortable with C, I recommend you look at the example programs included with the library and try to understand them. Specifically, you should check out the LCD examples, the servo examples, and the analog input/ADC examples (you would use the OrangutanAnalog functions to read the your distance sensor). You can then use these as starting points for your own programs.

Unfortunately, I don’t have time to teach you C or write substantial code for you, but I can try to answer specific questions about things you find confusing, and I’m happy to give you feedback about your programming attempts.

I have worked out the motors by looking at examples. using time delay (no encoders yet) I have made it move around in a square pattern.

Now I would like to start moving the servo. I tried the example code but none of it seems to make the servo move I have tried different pins each time but no response. The servo is connected to PD0.

Oh I forgot, is it possible to make a turn command? e.g

makes a 90 right turn. can i make this into a command like “turn_right90” so instead of writing the 2 lines of code I can just write turn_right90?

Can you describe how you are connecting your servo and post your code?

Oh I forgot, is it possible to make a turn command? e.g

makes a 90 right turn. can i make this into a command like “turn_right90” so instead of writing the 2 lines of code I can just write turn_right90?

Yes, in C this is known as a “function”, and a good C tutorial will tell you how to make your own functions. In this case, you can make the function:

You can then call this function elsewhere in your code.

The servo is plugged straight into the io using the power from the on board regulator. this is the code i have tried and there is no response.

In order to figure out what you might be doing wrong, I need you to be really specific. Which servo wire is connected where? Also, can you confirm that you actually understand what that program is supposed to do?

Can you see how this is not specific? Please put yourself in my position. If I was doing something that I thought should work but didn’t, what would you need to know from me to help figure out what it might be? In this case, it’s very important that I know what I/O line you are connecting it to!

I know you think you are connecting power to power and ground to ground, but I’d like to have some way of evaluating whether you are doing what you think you are, especially given that you’ve openly admitted to being new to this kind of thing. At this point, maybe it would be easier if you posted a picture of your setup so I can see your servo and how it is connected to your Orangutan.

Also, this might seem like a silly question, but are you sure the Orangutan is actually running the program you posted? Maybe you can make it write something to the LCD when it starts, and write something else when you push the button, so that you can be sure the program is running properly.

I’m not new to electronics just micro controllers and the programing of them. I also know how to use servos because I have model helicopters and cars which I built myself.

The code is the sample code that comes with the libraries off your site. I’ve used all three samples and none of them move the servo. one does give readouts on the LCD of the servo pulses. I’m sure the programer is working because I have loaded my own code and it runs it fine and I even loaded the demo program back on it to make sure it still works 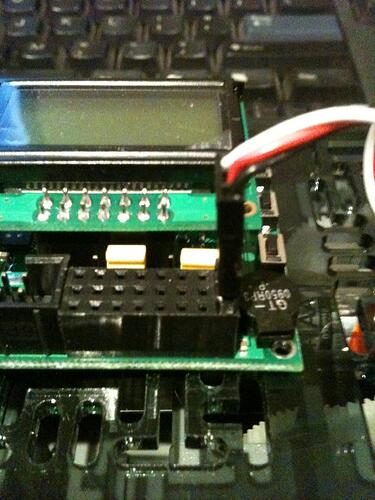 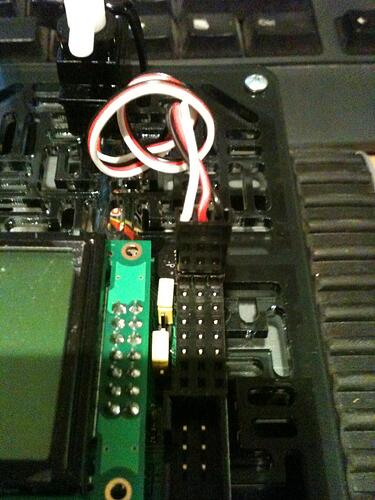 In your pictures, you are connecting your servo to pin PC5, while the code you posted is sending servo pulses to pins PD0 and PD1.

I have tried all different ports and all the example codes and none of them make it move. Just then i tried it on the right port and nothing. There is one that uses all 8 ports and still cant get it to move.

What is your power supply and what servo are you using? Do you have an independent way of verifying that your servo works (e.g. an RC receiver you can plug it into)? I assume you don’t have access to an oscilloscope? If not, do you have our USB AVR Programmer (you could at least use the programmer’s SLO-scope feature to verify that the I/O line is outputting a signal something that roughly looks like RC hobby servo pulses)?