A bumper of some type is needed to protect Balboa’s circuit board from damage in the event that the robot loses its balance. Although Lego blocks were suggested for this purpose, a more elegant solution is to use a pair of 3M X 7M Lego Technic Angular Beams (#4140327), which have a short angular extension at one end. The holes in these beams line up nicely with the bolt-positions on the sides of the chassis and the beams are installed with the angled section pointing up in the direction of the circuit board. I added a 12M Cross Axle (#370826 or 3708) between the free ends of the beams to provide a handy carrying handle. With the Lego parts installed, Balboa still balances without any adjustments to the Balancer sketch and still is able to pull itself up from a resting position on its back. 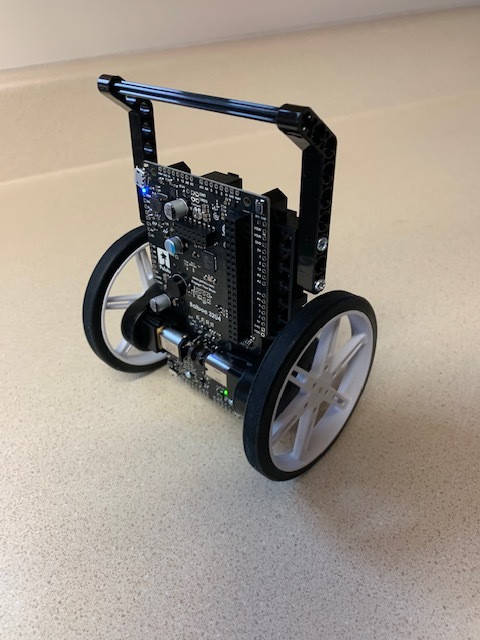 That is a fun idea! Thanks for sharing! Also, a Bumper Cage Kit is already included with the Balboa robot; is there any specific reason you wanted to use LEGO, instead?

I will try out the bumper cage later, but for initial tests I wanted to protect the circuit board with something closer to the unprotected configuration shown in the demo videos. The Lego Technic configuration I used keeps the lying-down starting angle close to the unprotected value and adds minimal mass, allowing Balboa to stand itself up without any adjustments to the script parameters.

The Lego Technic solution also allows building in other features using standard Lego Technic parts. For example, a framework could be added to hold an added sensor such as an ultrasonic rangefinder.