I just received the Balboa robot and put it together.
Before connecting the Balboa, these directions to install the A-star windows drivers were followed:

Once the driver was installed I got a successful installation dialog:

My problem is the Balboa is not connecting correctly to my Windows 10 PC via a USB data cable.
My first thought was a bad download so I uninstalled this above inf driver and used the one from github:

https://github.com/pololu/a-star.git
But this didn’t work either.
After both installs I attempted a PC reboot but didnt have success there either.

I’ve attempted with 2 different USB micro data cables but can get no success.
Both USB cables have been double checked to ensure I can see my phone data when using them.

No success yet uploading any Arduino sketches to the Balboa
When the Balboa and my PC are connected only 2 leds power up:
(1) the led by the micro USB powers on a steady green
(2) the led by the A button flashes once a second.
(looks like the standard Blink sketch)

The power button works toggling the blue led off and on.
I’ve not seen any other LEDs light up.
The batteries are fully charged as they read 9.4 volts at the solder points with a multimeter

Here is a screenshot of my device manager: 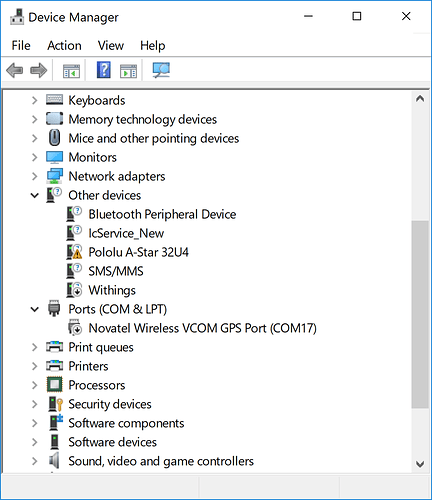 Hitting the reset button does not change the above device manager configurations.

Is there anything else I can try?

Can you double-click on the “Pololu A-Star 32U4” device entry in your Device Manager and post a screenshot showing the “Device Status” box?

Amanda,
Thanks for getting back to me.
I have not been using a USB hub but plugging the Balboa’s USB directing into the PC’s USB ports.
Also I have tried the two available USB 3.0 ports on my laptop.
Here is the screenshot of the Properties/Device Status Dialog Box : 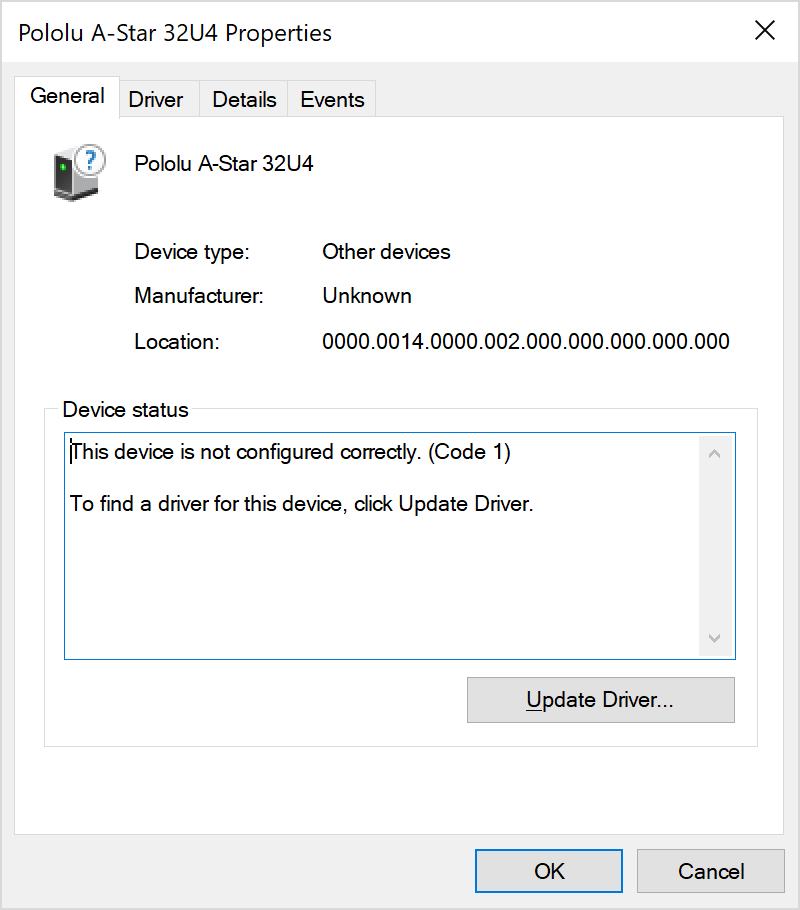 Can you post the full file path of a-star.inf? Can you open the Details tab, select “Hardware Ids” from the Property drop-down field, and post a screenshot of the window?

Here is a screenshot of my a-star.inf Windows explorer directory:

Here is a screenshot of the Hardware Ids tab:

I don’t see any issues with the A-Star driver’s file path or the hardware ids listed for the device entry. Can you post a screenshot showing the Driver tab? Also, can you quickly press the A-Star’s reset button twice within 750 ms, putting the A-Star into bootloader mode (the yellow LED should be fading in and out slowly), and see if there’s an entry for the A-Star’s bootloader in your Device Manager?

Here is the Driver tab screen shot of the Balboa: 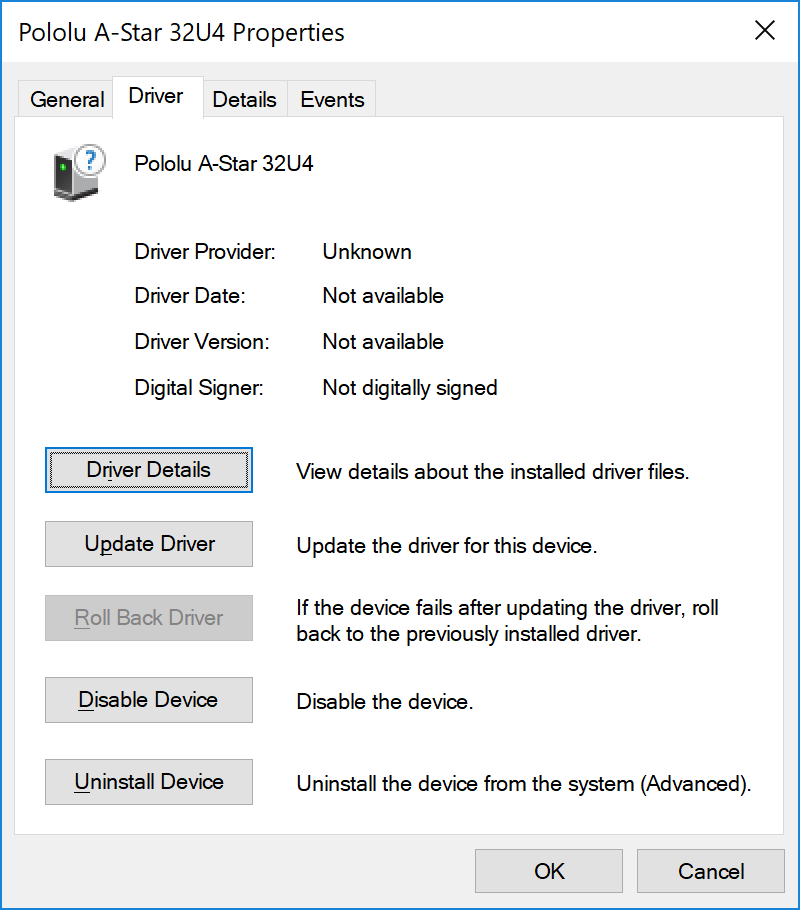 Successfully put the Balboa into bootloader mode.
Yellow led slowly faded in and out.
Here is the a bootloader entry properties in the device manager: 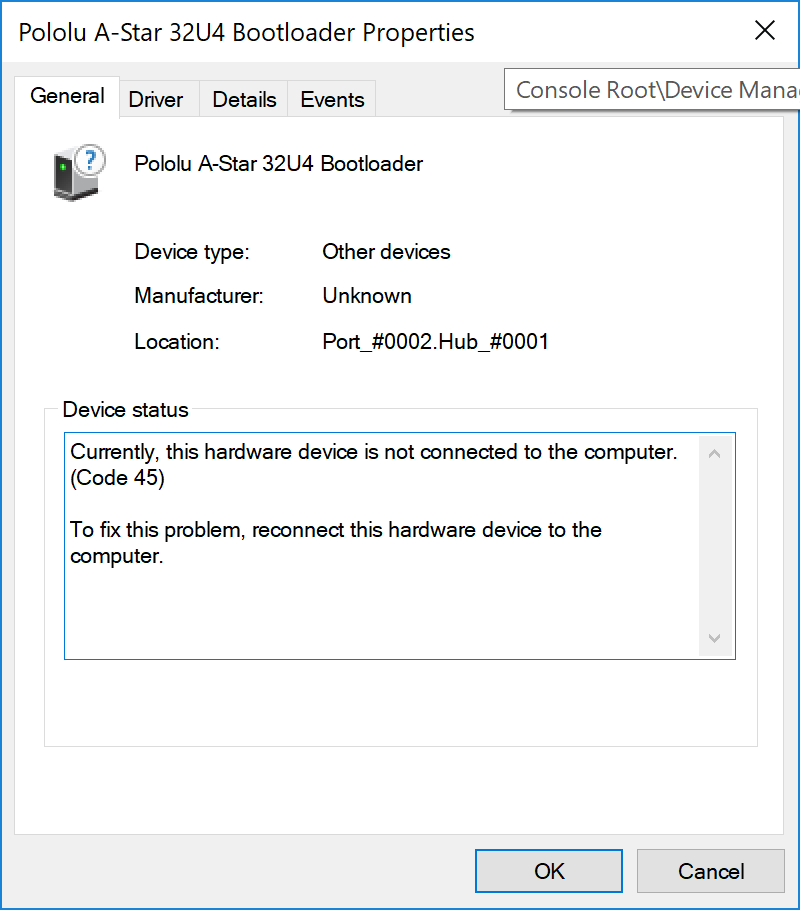 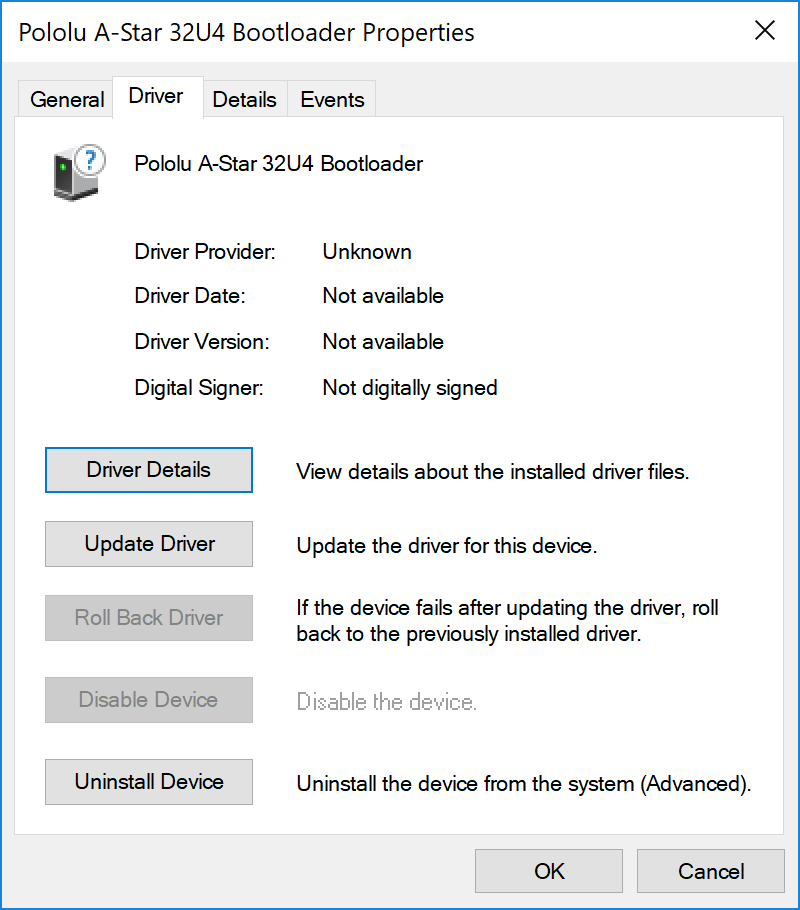 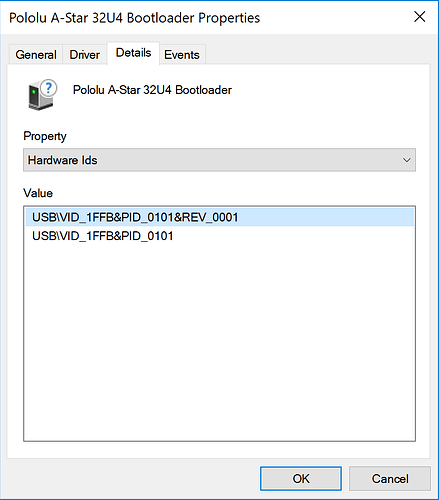 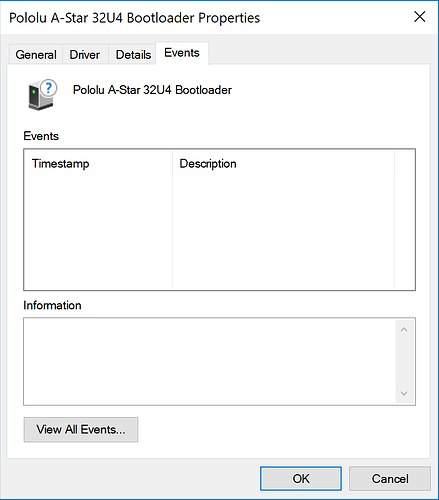 It seems like your computer is able to detect both the sketch and the bootloader of your Balboa, but it does not want to use the driver (a-star.inf). We have not seen this issue before, but maybe if we get more information on your system, we might be able to figure it out.

Can you connect the Balboa to your computer (if it is not already), run the “System Information” app from the Windows Start menu, save your system information by clicking File->Save and post it here?

If possible, can you try a different computer running a different operating system like Linux or macOS (specifically running macOS 10.11 through 10.14)?

Here is requestd info:
info.zip (1.8 MB)
When I get a chance, will try it on another PC/OS to see if the Balboa works from there.

We looked at your system information but unfortunately did not find any clues.