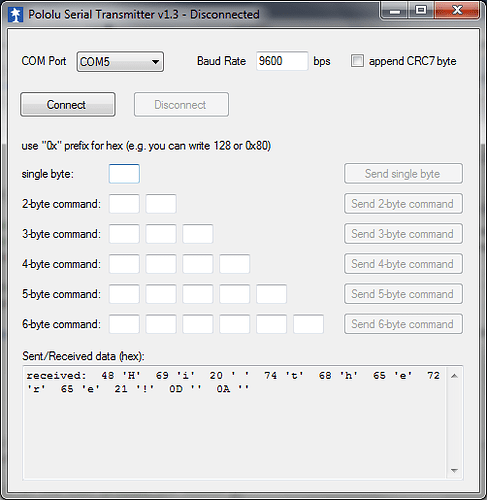 Pololu serial transmitter v1.3 Hi there.png502×515 42.5 KB
I am struggling getting the UART serial transmission going on my Baby-O, there is communication but the baudrate does not seem to match.

For testing I used the Pololu Library example, as I do not have any buttons I moved the “Hi there!” outside the push button action and created a 1 sec interval.

[code]/* uart3 - an application for the Pololu Baby Orangutan B
*

// process_received_byte: Responds to a byte that has been received on
// PD0/RXD. If you are writing your own serial program, you can
// replace all the code in this function with your own custom behaviors.
void process_received_byte(char byte)
{
switch(byte)
{
// If the character ‘G’ is received, turn on the green LED.
case ‘G’:
green_led(1);
break;

For reading the serial I use the Pololu programmer attached to GND, TX and RX of my Baby-O

I tried some other examples but nothing was successful.

I created this with Atmel Studion 6.2 and after creation of a new project I copied the software from the library description documented on the pololu website. Does this create an omission. Is it possible to open this example directly from Atmel Studio?

Looking further I noticed that Hi there! is actually there, the 48 represents the ASCII code for ‘H’

Can I prevent that from happening?

How do I send numbers?

Serial data transmission is working as expected. What is it that you really want to do?

I want a list of MPU6050 sensor values. It appears that when the motor is running the noise is too much for my logic to handle. In order to solve this I need some filtering. I read a lot about KALMAN filtering and wondered if I could extract my sensor values and put them in an Excel simulation sheet so I can test my logic and determine the output before putting it into my program.

The following code allows me to grab a value from the sensor and send it out by serial logic. In this case I prefer PUTTY as this gives a clean column of values which can be copied directly into Excel.

The Serial Transmitter just give too much information of the received message.

This test program shows the functionality to send a series of values in a column. Now I have to put that into my prototype and get me some real data.

[code]/* uart_tx_poc - an application for the Pololu Baby Orangutan B
*