I have been using the AVR Programmer to program an Atmega16 chip. Things have been going great and I have been very happy with the product but now…

I decided to go to the next step and solder a 6 pin header to the to the b, a, tx, rx, gnd, and vbus connection points on the side of the board so that I could experiment with the scope and serial connections features. I thought the soldering went well but then I plugged in the avr programmer the LED light went on for a moment and then the LED turned off. I tried unplugging and and reconnecting still no LED. I no longer get any LED and the programmer is not in device manager anymore. I must have broken the programmer while soldering.

Is the programmer very sensitive to heat, could I have held the 45 watt soldering iron on the board too long and fried something (if so what is too long.) Is there any chance that I can repair the programmer?

I’m sorry you’re having trouble with your programmer. Can you post an in-focus, high-resolution picture of your solder job? Do you have an estimate of how long you were holding the soldering iron on each pin?

Hi, In an attempt to see if I could get it to work I already desoldered the pins so they are no longer in. I would say at the most about 5 seconds. Is there a way I can test to for resistance to check for burned out components or is repair not an option? If get another one what would you recommend the longest time I should hold the iron to the pin? Thanks for your help

The programmer is not unusually sensitive to heat, so I think your soldering would have to have been really poorly done to damage it. Five seconds per pin does seem slightly long, but I was more worried about damage from solder bridges. Was the programmer powered while you were soldering to it? Is there any chance you accidentally knocked off any components while you were soldering?

Before you try soldering again, I suggest you read through some soldering tutorials to make sure you understand the appropriate technique, and you might benefit from practicing on some perfboards or broken electronics before you try again on something real.

Is your programmer still non-functional? What happens when you connect it to USB? Some pictures of the top and bottom of the board might still be helpful in identifying any damage you might have done.

It was not powered or plugged in when soldering. I will post some pictures this evening. It is still not working, when I plug it in I get no LEDs and no com ports in device manager.

After the soldering job I plugged it in and saw the red and orange lights go on. I then programmed the atmega chip via the 6pin ISP as I had been doing before (no changes to the bread board configuration). The compiler AVRGCC failed to see the programmer, I then noticed the LED fading or being intermittent very briefly and I unplugged the USB. I replugged it in and no LEDs turned on. I unplugged the 6 pin ISP, replugged the USB, still no LEDs.

I will post some pictures tonight and maybe you can tell if damaged a bridge and if there is any possibility of fixing it.

Did you have anything plugged into the serial pins when you noticed the LEDs starting to fade out?

Ben, another question. I just realized that perhaps I damaged the programmer with my configuration of the bread board.

I am sharing a few of the ISP pins on the Atmega16 with the LCD. In the past when I program I have had no problems but occasionally I would get an error and need to plug and unplug the the isp and usb, reconnect and then programming would work. Is it possible the by sharing the ISP pins with LCD pins I may have shorted the programmer or damaged it somehow. Perhaps, it is just a coincident that it happened right after my soldering of the header pins.

thanks for your help

It’s possible that could be the culprit. The programmer uses two of its programming pins as digital outputs and one as a digital input. If you happened to connect the programmer’s outputs to pins that the LCD is also treating as an output, you would be shorting two outputs together in a way that could potentially damage something. In general, it’s a good idea to leave the programming pins free, or carefully determine that whatever you connect to them will be safe and not interfere with programming.

Do you need to share your programming pins with the LCD? If the LCD has an SPI interface, you could potentially control it using software SPI (it’s pretty easy to implement master SPI using arbitrary digital I/O lines in software).

I will change the configuration so that the LCD is not connected to any of the pins that the programmer uses (I think I have room to do this). If it was shorted is there any chance of repairing the programmer (replacing a resistor…?).

Also, if i have to purchase a programmer can I just purchase a new board, I do not need the ISP cables or USB cables?

Unfortunately, I think the board is likely not easily repairable, and if you damaged it by shorting something, the microcontroller could be permanently damaged. I’d still be interested to take a look at some pictures of the board in case I can notice anything amiss, but I’m not optimistic you’ll be able to get it working again. If you want to try again with a new programmer, please email us and we might be able to get you a discount on a replacement.

Here are the photos let me know what you see. 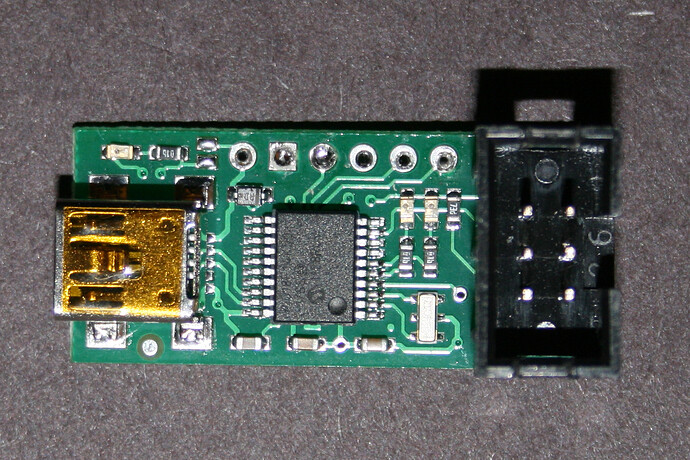 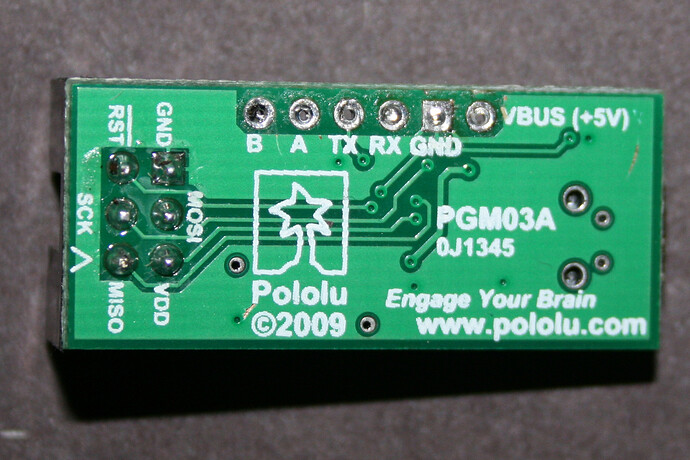 Thanks and if I can not get this one to work I will email you thanks for the offer.

Thank you for the pictures! (I really appreciate the detail and that they are in focus.) Unfortunately, I don’t see anything obviously wrong, although I do notice a few places where the solder mask has been scraped off and the underlying copper is exposed on the bottom of the PCB. I don’t think this by itself would explain your problems (unless whatever made the gashes caused a short), but it might be an indication that the board has been exposed to some rough treatment that could have also caused other problems.

Yes, I noticed the scratches to. They happened after the board was no longer working. I used pliers to take off the plastic from the header pins thinking that some soldered seeped through and made a short between the plastic and the board. When I got the platic off the pins it was clear that no such short had occurred.
Thanks Ben.