Aruino UNO at 3volts with a Wixel

er new person here - 1st post [/idiot mode]
am I right in thinking that if I connect a Wixel to a UNO running at 3 volts (2AA), I can dispense with level-shifting the signals?

On the Arduino Uno website, they say that the minimum allowed input voltage to the board is 6 V, so how are you going to power it at 3 V?

ah
it’s actually just an ATmega 328 with the UNO bootloader, rather than a “proper” UNO so I was contemplating running that at 3 volts

One thing to worry about is that when you plug the Wixel in to USB, its 3V3 line line will go up to 3.3 V. If your AVR’s batteries have discharged some, then the AVR could be running at a significantly lower voltage than the Wixel. There is a risk that the Wixel would partially power the AVR through the Wixel’s TX line. To minimize the risk of that, you might want to put a 200-1000 Ohm resistor between the Wixel’s TX line and the Arduino’s RX line, and another one between the Wixel’s RX line and the Arduino’s TX line just to be safe.

If you are using a 5V USB-to-serial adapter to program the ATmega328, then you should take appropriate precautions to avoid powering the AVR at 5V through its RX line.

Other than that, I think your setup will probably work.

good call re the FTDI “powering” the 'duino

I just tried the 'duino at 3 volts (2AA into the 3.3 volt pin)
with the wixel on a wixel shield
sketch works fine

we may have a result!

from the schematic it looks like the 3.3volts out could be used as a 3.3 volts in

what I have in mind is 2 AA which gives approx 3 volts
obviously I’d decouple with say 100uF and 0.1uF

if I feed that in through Vin, there’s a diode and a regulator each stealing some of my precious volts!
so why can’t I feed power in through the 3.3volt pin?

I accept that Valt won’t be good for anything!

Plugging your 2 AA batteries directly in to the 3V3 should be OK as long as you do one of the following:

The reason for this is that you want to avoid powering the 3.3 V regulator and connecting its output directly to batteries. The batteries would have a voltage lower than 3.3 V so the regulator would be unable to get the voltage up to 3.3 V, and it could break itself or get very hot trying.

thanks for the caveats
I hadn’t considered connecting batteries and USB at the same time
so - good call!

just to confirm, before I attack my poor wixel with an axe
the 3.3 volt regulator is the only 5 pin device on the board
mine’s labelled AG3B
and I should cut the lower left pin (furthest away from the USB connector)
it’s on the side with only 2 pins?

I drew a picture so you can be less nervous: 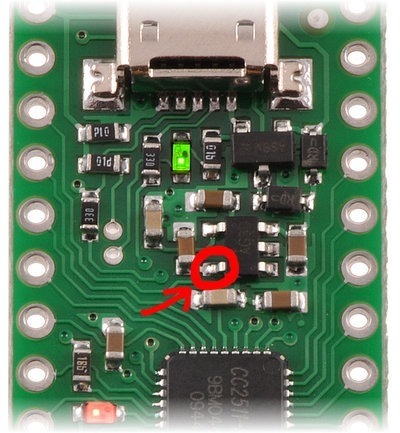 That is the output pin of the Wixel’s 3.3 V regulator.

excellent!
that was my guess
you, sir, are a star!