Im currently working on design and build an electric skateboard whose motors are controlled wirelessly from a flex sensor glove. The project deals with dealing with sensor readings, serial communication, and motor control. I have setup the sensors and use an Arduino nano for data collection and further processing and later averaging the readings since Im using 5 flex sensors. I than want to send the data from the nano(w/o using the Wixel Shield) and from there wireless transmit the data to the receiving Wixel which is connected to a Wixel Shield for Arduino and Arduino Uno, which deals with the motor control part of the project. I trying to grap the idea of how to deal with communicating between two Arduinos. I have scene examples online when on Wixel is connected to a Wixel which is connected to Arduino and the other is connected to a PC, but I want just communication between two Arduinos. How can I make this possible?

I dont want to to program the arduino nano wirelessly, I just want it to it to have the feature of wireless serial communication to the wixel that is attached to the Uno through the Wixel Shield. For the Arduino Nano, I do since this will be attached to the skateboard.

i want to just connect my sensors to with Wixel and transmit those analog readings to a Wixel shield connected to the Arduino UNO. I’m thinking of utilizing the wireless_adc_tx and wirekess_adc-rx apps. Possible modify the wireless_adc_rx app with conjunction to the Wireless Serial App for Shield. I just don’t know who to go about this?

What exactly do you not know how to do? Please be more specific.

If your flex sensors just output analog signals between 0 V and 3.3 V, then you can connect those directly to the Wixel’s analog pins. The wireless_adc_tx app sends the ADC readings on all six analog channels on the Wixel in one packet to the other Wixel running the wireless_adc_rx app. I suggest looking at the comments in the code for both apps to understand how they work and interact with one another. You can find their source code in the Wixel SDK under the “apps” folder.

By the way, the wireless_adc_rx app sends the results to the computer via USB, but you can use the Wixel’s UART library instead of its USB library to send data from your receiving Wixel to your Arduino Uno.

I tested the apps. Im not getting actual change in values as I bend the sensor. I made a voltage divider circuit for each sensor and the values I’m getting was 3270. 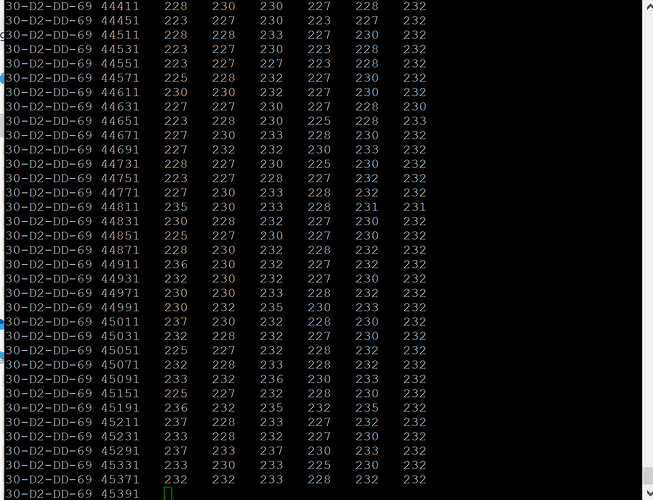 Can you measure the voltage on your Wixel analog inputs using a multimeter and verifying that they are actually getting 200 mV? Please measure pins P0_0 to P0_5 on the Wixel running the wireless_adc_tx app. What are the units for 3270? What did you use to read your sensors before?